Question 6.
The point of optimum utilization of resources lies on which side of PPC curve:
(a) Towards left
(b) Towards right
(c) Inside
(d) Upwards
Answer:
(d) Upwards

Question 5.
Answer the following in one word/ sentence:

Question 1.
What do you mean by macro-economics ?
Answer:
Macro-economics aims at dealing with the aggregates and averages. It is not interested in the individual items but as total savings, total consumption, total employment, aggregate demand, etc.

Question 2.
What do you mean by micro-economics ?
Answer:
Micro-economics studies the economic actions of individuals i.e., particular firm, individual households, wages, interest, profit etc. In other words it is infact a microscopic study of the economy.

Question 4.
What do you mean by goods ?
Answer:
All physical, tangible objects which satisfy human wants and need i.e., objects which possess utility, are called goods.
For example : Tables, cars, etc.

Question 5.
What do you mean by economic activity ?
Answer:
Economic activities are those activities which increases the material, welfare of man and which are used for increasing wealth and welfare.

Question 6.
How are services ?
Answer:
Services are non – material, intangible goods which can not be seen, touched or stored and have power to satisfy human wants and needs. For example, services provided by doctor.

Question 7.
Write the meaning of ‘a person’.
Answer:
By person, we mean the decision taking units.

Question 8.
How many branches are there of Economics ?
Answer:
Economics has two branches:

Question 9.
What to you mean by resources ?
Answer:
Those goods and services which are used to produce other goods are known as resources. They are traditionally known as factors of production.

Question 10.
What do you mean by economy ?
Answer:
It refers to the sum total of economic activities in an area, which may be a village, a city, a district, or a country as a whole. They provide source of livelihood.

Question 1.
What do you mean by macro-economics ? Write its two characteristics.
Answer:
Macro-economics:
Macroeconomics is the study of aggregate factors such as employment, inflation and gross domestic product and evaluating how they influence the economy as a whole.

The characteristics of macro-economics are as follows:
1. Broader perspective:
The concept of macro-economics is broader. In it small units are not given importance but with the help of it National and International economic problems.

2. Broad analysis:
In macro-economics broad analysis is given importance. For example, under the subject matter of macro-economics we study the monetary and fiscal policies of the government. It studies the general problems of national level like the effects on – monetary policy, fiscal policy, general price level, general employment etc. If the effect of public finance and public expenditure is good on society then we can conclude that the . effect of it is also good on each person of the society.

1. Macro static:
Macro static method explains the certain aggregative  relations in 1 stationary state. It does not reveal the process by which the national economy reaches the equilibrium. It deals with the final equilibrium of the economy at a particular point of time. It does not analyse the path by which the economy reaches equilibrium. It presents a “still” picture of the economy as a whole at a particular point of time. Pro. Keynes has explained by this equation:

2. Comparative macro statics:
The various macro variables in the economy are subject to charge with the passage of time. Total consumption, total investment and total income etc. go on changing and so the economy reaches different levels of equilibrium.

3. Macro dynamics:
This is a realistic and new method of economic analysis. Under this method, we study how the equilibrium in the economy is reached as a result of changes in the macro variables and aggregates. This method enables us to see the movie picture of the entire economy as progressive whole. This method is a complex method. It is recently developed by Frish, Robertson, Hicks, Tinburzon, Samulson etc.

An economic problem arises because of the following causes:
1. Human wants are unlimited :
With the satisfaction of one want, another want arises. These is a difference in the intensity of wants also. Thus, there is an unending circle of wants, when they arise, are satisfied and arise again.

Question 4.
“Scarcity is the mother of all economic problems”. Explain.
Answer:
The statement is true, no matter, how well a particular economy is endowed with resource, these resources will be relatively scarce to fulfill its unlimited wants. Moreover, these scarce resources have alternative uses and can be allocated to the production of different goods and services. Thus, it is due to the scarce availability of resources to fulfill the different and competing unlimited wants that an economy faces the economic problem of choice. Thus, it is rightly said that Scarcity of resources is the mother of all economic problems.

Question 6.
What do you understand by normative economic analysis ?
Answer:
Normative economic analysis is concerned with ‘What ought to be’. It examines the real economic events from moral and ethical angles and judge whether certain economic events are desirable or undesirable, e.g., it deals with the analysis of questions like what should be the prices of food grains, unemployment is better than poverty, rich persons should be faxed more. 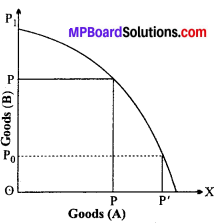 Question 12.
Why is production possibility curve concave to the origin ?
Answer:
Production possibility curve is concave to the origin because to produce each additional unit of goods X, more and more unit of goods Y is to be sacrificed. Opportunity cost of producing every additional unit of goods ‘A’ tends to increase in terms of the loss of production of goods Y. It is so because factors of production are not perfect substitute of each other. As we move down along the PPC, the opportunity cost increases. And this causes the concave share of PPC. 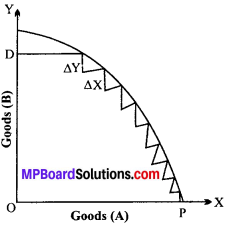 Question 13.
What is studied in Economics ?
Answer:
It is an important question that what should be studied under subject matter of economics. Wants are unlimited but resources are limited. It is decided in economics that row resources should be economically and more efficiently used. Study of subject-matter of economics includes the rational use of resources. The ultimate air of any economy is to have maximum economic welfare.

In any economy, what economic system we use is based on macro and micro-economics. In micro-economics, we study principle of consumers, price determination, producers behavior, monetary policy, inflation, Government budget, exchange rate etc. is studied. 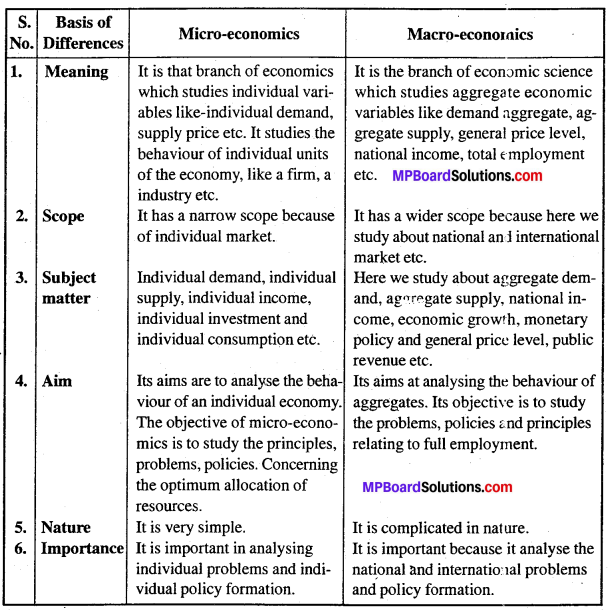 Question 2.
Define micro-economics and explain its characteristics.
Answer:
The word ‘micro’ is originated from the Greek word micros; which means small. Micro-economics studies the economic actions of individuals. Under this branch the whole economy is divided into small individual parts i.e., a particular firm, individual household, wages, interest, profit etc. According to Chamberlain, “The micro model is built solely on the individual and deals with interpersonal relations only.”

3. Determination of individual price :
Micro-economics is also called the price theory. It determines the individual price of different products by analyzing the demand and supply i. e., behavior of buyers and sellers.

3. Helpful in determining economic policies:
The economic policies of government are studied in micro-economics in order to know as to how they influence the functioning of individual units.

3. Concentration on small parts:
Instead of studying the total economy, micro-economics studies only small parts of it. It fails to enlighten us the collective functioning of the national economy.

4. Unable to analyse certain problems:
There are certain economic problems which cannot be analysed with the aid of Micro-economics. For example, important problems relating to public finance, monetary and fiscal policy etc., are beyond purview of microeconomics.

5. Infeasible:
Micro-economics fails to provide us with a description of the real world as it is. It is not in a position to take into accountable the entire economic data of the real world.

Question 7.
What is opportunity cost ? Explain with suitable example.
Answer:
Opportunity cost is defined as the value of a factor in its next best alternative use or it is the cost of foregone alternatives, or it can be defined as the value of the benefit that is sacrificed by choosing an alternative. We can also say that opportunity cost of any commodity is the amount of other goods which has been given up in order to produce that commodity. It is also known as opportunity lost or transfer earning of a factor e.g., a person is working in college ‘A’ at the salary of ? 70,000/- per month, he has two more options to work:

We can show the basic problem of choice or all forms of economic problems with the help of this production possibility curve. This is shown in the table and diagram. Here, for the sake of simplicity we have presumed that only two commodities i.e., wheat and machines are being produced in an economy with limited capital.

Question 9.
What do you mean by Marginal Opportunity Cost ? Explain with the help of an imaginary schedule.
Answer:
Marginal Opportunity Cost can be explained as if the resources are transferred from one use to the other, it is obvious that there would be loss in production of one goods in order to increase output of the other. This loss is marginal opportunity cost which is technically termed as marginal rate of transformation. It is also called as rate of sacrifice.

Conclusion:
Macro and micro-economics both are interdependent on each other. Neither is complete without the other. We must study macro-economics because it deals with average variables, such as national income and national output. We must study microeconomics because national output and national income are eventually the result of decision of millions of business firms and individuals. Thus, we can conclude that both are complementary to each other.

Question 11.
Search for new entrepreneurs so that expansion of industries can be done and more use of capital intensive technology can be done in the country.
Answer:
When the economy is below its potential due to unemployment, the economy operates inside the PPC. When the government starts employment generation scheme, it enables the economy to utilise its existing resources in the optimum manner. The resources which were sitting idle, now get 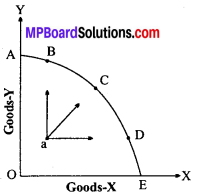 job and the economy functions at its maximum capacity and moves from inside the PPC to points on the PPC. Thus, economy moves from point ‘a’ below PPC, to any point on PPC as shown in the figure.

Question 13.
Explain the five factors determining demand.
Answer:
1. Price of commodity:
Price is a dominating factor. The demand for a commodity is increased when the price of it decreases and the demand for it decreases when the price increases. For example, if the price of a commodity is Rs 50 then its demand is 100 units. If the price increases to Rs 100, its demand will be 50 units. In other words, there is an inverse relation between price and demand. 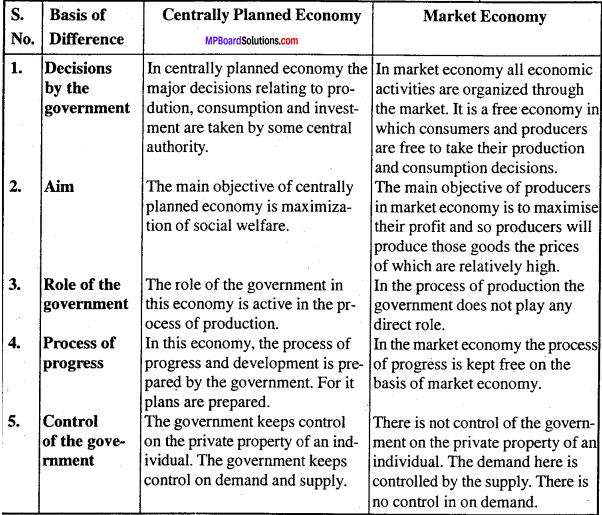