Questions 3.
Which state has highest percentage of literacy?
(a) Uttar Pradesh
(b) Kerala
(c) Goa
(d) Delhi
Answer:
(b) Kerala

Questions 4.
Which is the most densely populated Union Territory?
(a) Chandigarh
(b) Pondicherry
(c) Delhi
(d) Lakshadweep
Answer:
(c) Delhi

Fill in the blank:

Question 1.
What is birth rate?
Answer:
The number of live births for every thousand persons is called birth rate.

Question 2.
What is death rate?
Answer:
The number of deaths per thousand population in a year is called death rate.

Question 3.
What was the density of population in India in 2011?
Answer:
In the year 2011 population density of India was 382 persons per square km.

Question 4.
What was the sex – ratio in India in 2011?
Answer:
According to census 2011 the sex – ratio of the country was 943 (there are 943 females per thousand males) meaning that the number of females is less than number of males.

Question 3.
What do you understand by National Population Commission?
Answer:
Following National Population Policy 2000, National Commission on Population has been established. The Prime Minister is the President of this commission. Chief ministers of all States and Union Territories, administrators and ministers, in charge of all related departments and central ministers, renowned demographers and the representatives of public health and professional organizations and non – government organization are its members. 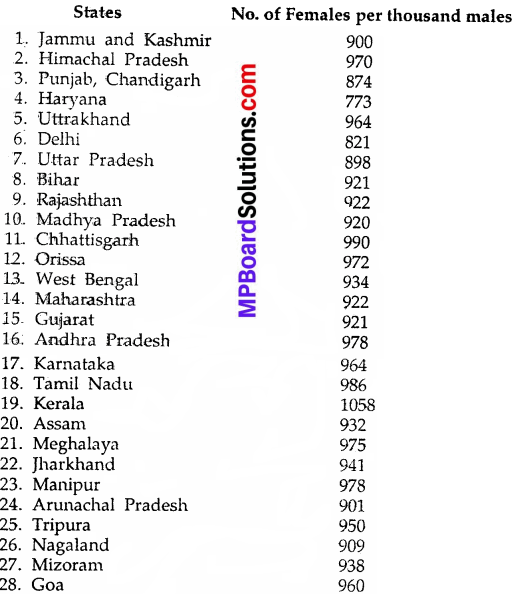 2. Increase in Life Expectancy:
The difference between birth – rate and death-rate is called natural growth rate. The average age of life is known as life expectancy. In our country, life expectancy (average age) was 50 years in 1921 which increased to 62 years in 1991. Hence due to longevity population kept on increasing.

3. Lack of Education:
In education gives birth to superstition.. Most of the uneducated people believe that children are gift of God. Believing this they keep on begetting children and hence population also increases. Desire for son is also responsible for many children in one family. The lower class hesitate from adopting family welfare programmer.

4. Other Causes:
Poverty, lack of means of entertainment, low standard of living, child marriage and migration etc. are among the other causes of population growth. Due to population growth many problems are coming up in our country, such as poverty, unemployment, decline of standard of living, hunger, increasing crimes, housing problem, transport problems, lack of medical facilities and increasing pollution etc.

5. Measures to Control Population Growth:
If the population growth is not checked immediately, flow of development will be hampered in the future. Following measures are essential to control the growth of population. 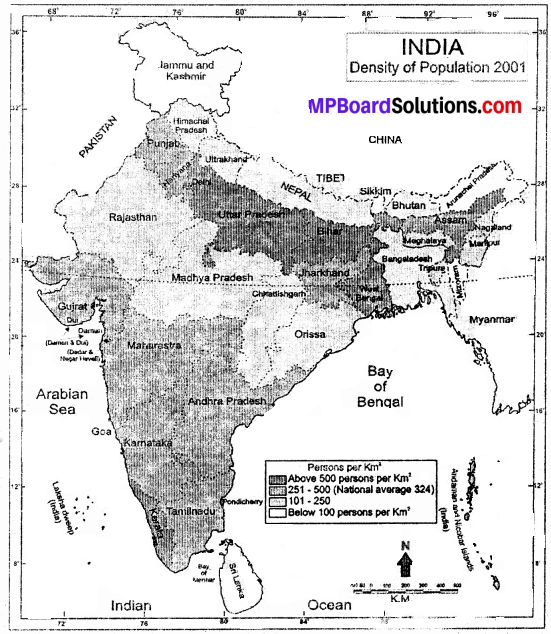 Suitable climate is helpful to the health and efficiency of man. The dry deserts of western Rajastan and Arunachal Pradesh are sparsely population due to bad climate. Fertile soil is ideal for agricultrue. The agriculture crops are the fundamental bases of livelihood and sustenance.

Many years from today Mumbai area was non – significant, but after the advent of Europeans its importance kept increasing and gradually it turned into commercial and industrial center, as a result its population increased. Today a large group of people go to stay from one place to another and from one country to another. This is called population migration. Population migration also affects a country’s population growth.

Question 3.
On the basis of population density, in how many parts India can be divided?
Answer:
India can be divided in four parts on the basis of density.
1. High Density Areas:
If we look at the population density map of India, we find that more than 501 persons reside in per square km. area in Uttar Pradesh, Bihar, West Bengal and Kerala. The fertile land and availability of water provide enough facilities of sustenance. In these areas urbanization and industrialization have provided people with sufficient employment opportunities and services.

2, Medium Density Areas:
These include areas having population density of 251 to 500 persons per sq. km. Andhra Pradesh, Assam, Goa, Maharashtra, Tamilnadu, Jharkhand, Punjab, Haryana, Tripura, Dadra and Nagar Haveli fall under this category. Developed agriculture, availability of minerals and industrial development are some of the reasons for high (medium) population density in these areas.

3. Areas of Normal Density:
These include all those states which have population density ranging from 101 to 250 persons per sq. km. The States included in this category are M.P., Rajasthan, Orissa, Chhattisgarh, Uttaranchal, Meghalaya, Manipur and Nagaland. These are hilly and dissected semi arid, forest covered regions. Here the means of livelihood are quite limited.

4. Low Density Areas:
These include Jammu and Kashmir, Arunachal Pradesh, Mizoram, Sikkim and Andaman and Nicobar Islands. Hilly areas, lack of transport facilities, under – development of agriculture and industries are the responsible factors for low density. The means of livelihood are very limited here. In Arunachal Pradesh, density of population is as low as 13 persons per sq. km.

Question 4.
What is National Population Policy 2000?
Answer:
According to the new population policy, qualitative change of life is essential for socioeconomic development. This will ensure use of man as productive capital for the society. The policy has three objectives.

1. Short term objective:
To develop health and basic infra – structure for the extension of contraceptive measures.

2. Mid term objective:
To reduce the total rate of reproduction till 2010 and onward.

3. Long term objective:
To achieve the target of stable population for sustainable economic development till 2045.
In order to meet the above objectives following socio demographic aims were also declared under the new policy.

Question 5.
What is the status of growth in literacy rate in India? Suggest your views to increase female literacy.
Answer:
After independence we had fast development in ail fields hut in the field of literacy continuous efforts are still needed. 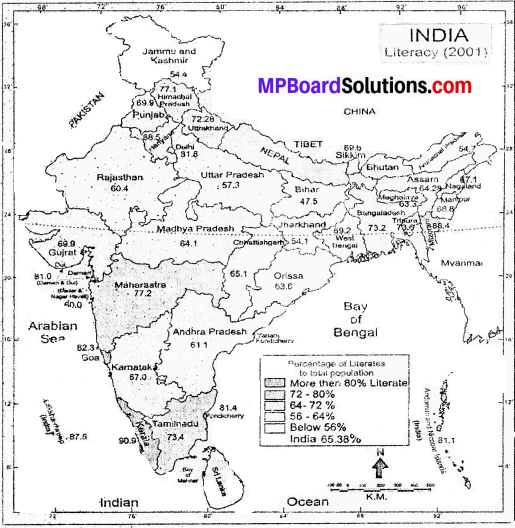 Disparities in Literacy Rates:
There are wide regional dis – parities in literacy rate. See the state – wise distribution of literacy in the map. It varies from 47.5% in Bihar to 90.9 in Kerala. Kerala is closely followed by Lakshadweep (87.5 percent) and Mizoram (88.4 per cent). Bihar ranks last in literacy among the states and union territories of India.

Male – female differentials are also wide. Only 54.16 per cent of the females are literate as against 75.85 per cent of males. There is much difference in the literacy rate of rural and urban population. In 2001 the literacy rate in urban areas was 79.9 per cent, whereas in rural areas it was only 58.7 per cent.

Question 1.
(i) India is the second most popular country of the world after –
(a) Australia
(b) China
(c) Japan
(d) None of the above
Answer:
(b) China

Fill in the blank:

Question 3.
Define ‘density of population’?
Answer:
The ratio of population of a country or state and its per unit area (square km.) is called its density.

Question 4.
What is the formula used to calculate density of population of a country or state?
Answer:
The formula is:

Question 5.
What was the population density of India in 2001?
Answer:
It was 324 persons per square km.

Question 13.
Give one term for the number of women per thousand of population.
Answer:
Sex – ratio.

Question 14.
What is the life expectancy in India now?
Answer:
67 years.

Question 16.
What is the main cause of rapid population growth in India after independence?
Answer:
There has been – sharp fall in death – rate but very slow fall in birth – rate.

Question 2.
Describe the areas m normal density.
Answer:
These include all the e states which have population density ranging from 101 to 250 persons per sq. km. The states included in this category are M.P. Rajastan, Orissa, Chhattisgarh, Uttaranchal, Meghalaya, Manipur, and Nagaland. 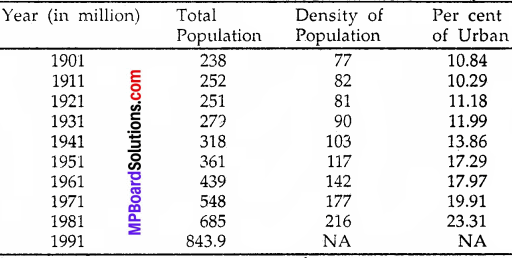 It will be seen from the above table that in just 34 years after independence another India was added while the territorial limit of the country remained unchanged. It is estimated that if we grow with this number, we will be more than 100 crore mark at the end of this century.

2. Second Largest Populated Country:
India has 2.4 per cent of the total land area of the world, India caters to the needs of 15% of the total world population. This means every seventh person in the world is an Indian.

3. Population Increasing at a Fast Rate:
It is not the overall absolute size of population which is the cause of concern, equally important is the fact that India’s population has been rising at a relatively very fast rate. It has gone up by a little over 2.0 per cent annum during the period 1951 to 1991 and about 2.1% presently.

4. Density of Population:
The density of population of India in 1961 was 216 persons per.sq. km. It rose to 267 in 1991. Thus the land man has been declining fast which indicates that the land will fall short for the in habitation of mankind of the population grow in this rate.

5. Uneven Distribution of Population:
The population is unevenly distributed. The northern plains, coastal plains and some river valley in lower Himalayas are densely populated while other areas of scanty rainfall or desert plateau and mountainous areas are sparsely populated. Thus there are areas which have great population pressure while other rare less inhabited.