Question 1.
A force of 7 N acts on an object. The displacement is, say 8 m, in the direction of the force (Fig. below). Let us take it that the force acts on the object through the displacement. What is the work done in this case?

Question 1.
When do we say that work is done?
Answer:
We can say a work is done whenever the conditions given below are satisfied:

Question 3.
Define 1 J of work.
Answer:
1 J is the amount of work done when an object is provided with a force of 1 N that displaces it through a distance of 1 m in the direction of the applied force.

Question 1.
What is the kinetic energy of an object?
Answer:
The energy attained by or generated in a body due to its action or motion is called kinetic energy. Every object which possesses motion contain a kinetic energy. A body uses kinetic energy to do work. Kinetic energy can be used for any work to be performed. Kinetic energy is useful to generate other forms of energy too. It is expressed by KE and can be calculated by the following formula:
Ek = \(\frac { 1 }{ 2 }\) mv2
Here, m represents mass of object.
And ‘V’ gives the velocity by which object is shifting or working.

Question 2.
Write an expression for the kinetic energy of an object.
Answer:
Energy Ek is proportional to:

Question 1.
What is Power?
Answer:
Work done is calculated by the amount of power consumption. Power can be understood by the term efficiency of an object to consume or generate energy. So, power is the rate of doing work or the rate of transfer of energy. If W is the amount of work done in time t, then power is given by the expression,
Power = \(\frac { Work }{ Time }\) = \(\frac { Energy }{ Time }\)
or
P = \(\frac { W }{ T }\)
It is calculated in watt (W).

Question 1.
Look at the activities listed below. Reason out whether or not work is done in the light of your understanding of the term ‘work’.

Answer:
Work is done whenever the two given conditions are satisfied:

Hence, work is done in case:

Work is not being done in case:

Question 5.
A mass of 10 kg is at a point A on a table. It is moved to a point B. If the line joining A and B is horizontal, what is the work done on the object by the gravitational force? Explain your answer.
Answer:
Work done by gravity depends only on the vertical displacement of the body. It does not depend upon the path of the body.
Therefore, by the expression,
W = mgh
Here,
Vertical displacement, h = 0
W = mg × 0 = 0
Hence, the work done by gravity on the body is zero.

Question 8.
Does the transfer of energy take place when you push a huge rock with all your might and fail to move it? Where is the energy you spend going?
Answer:
When we push a huge rock, there is no transfer of muscular energy to the stationary rock. Here, the energy is completely spent doing work (pushing) against friction between the ground and the rock.

Question 11.
What is the work done by the force of gravity on a satellite moving round the earth? Justify your answer.
Answer:
Work is done whenever the two given conditions are satisfied: 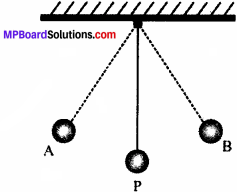 The pendulum loses its kinetic energy to overcome atmospheric friction and stops after some time. Hence law of conservation of energy is not violated and the total energy of the pendulum and the surrounding system remain conserved.

Question 18.
In each of the following a force, F is acting on an object of mass, m. The direction of displacement is from west to east shown by the longer arrow. Observe the diagrams carefully and state whether the work done by the force is negative, positive or zero.

Answer:
Case I: Here, the direction of force acting on the block is perpendicular to the displacement. Therefore, work done will be zero.

Question 6.
If direction of applied force and displacement are perpendicular then resultant work will be ____________ .
(a) Zero
(b) Positive
(c) Negative
(d) Infinite.
Answer:
(a) Zero

Question 3.
What is a positive work?
Answer:
When displacement occurs in direction of force applied and object shifted forms an acute angle with force, work is termed as positive.

Question 5.
What kind of quantity is power?
Answer:
It is scalar.

Question 10.
Write expression for potential energy for an object being shifted to ‘d’ height and ‘a’ mass.
Answer:
PE = agd.

Question 12.
What happen to potential and kinetic energy of a falling object?
Answer:
P.E. = decrease to zero
K.E. = increase from zero
Total P.E. converts to K.E.

Question 4.
Give two examples of energy produced due to work or action.
Answer:
Examples showing production of kinetic energy:

Question 5.
Read the following examples and tell in which case work is being done?

Answer:
Work is being done in none case because:

Question 6.
(a) Under what conditions work is said to be done?
(b) A porter lifts a luggage of 1.5 kg from the ground and puts it on his head 1.5 m above the ground. Calculate the work done by him on the luggage.
Answer:
(a) Conditions for work to be done:

(ii) Power of an object may vary. Hence, average power is important in the case when the average power of the entire process within a given time is calculated.

Question 1.
Ravi saw a lady labour who carried stones on her head from one point of the construction site to the other end which was some 500 m far. He prepares a trolley for the labour to carry the stones, to make her work easier: