Question 1.
A survey conducted by an organisation for the cause of illness and death among the women between the ages 15 – 44 (in years) worldwide, found the following figures (in %): 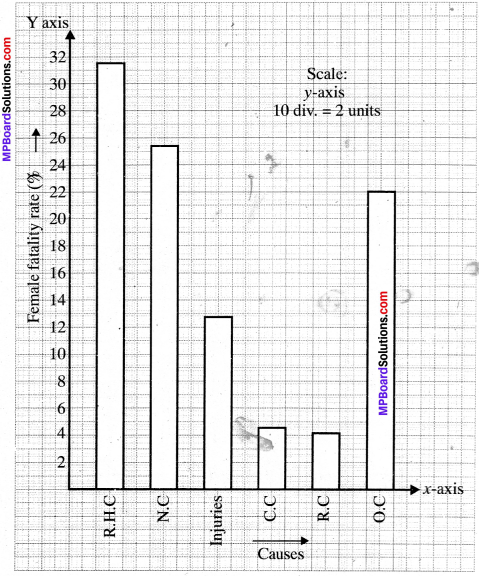 2. Major cause of women’s ill health and death worldwide is reproductive health conditions (RHC).
3. Try to do it with the help of your teacher.

Question 2.
The following data on the number of girls (to the nearest ten) per thousand boys in different sections of Indian society is given below. 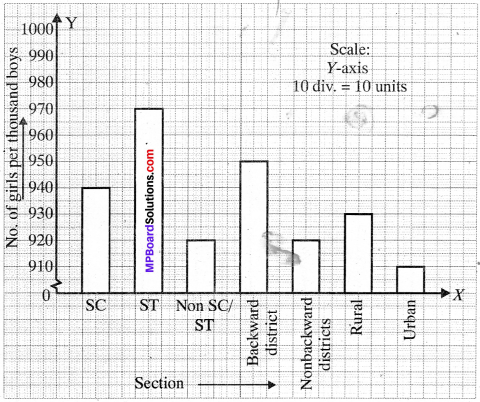 2. From the graph we can say that ratio of girls/boys is more in sched¬uled tribe of Indian society.

Question 3.
Given below are the seats won by different political parties in the polling outcome of a state assembly elections: 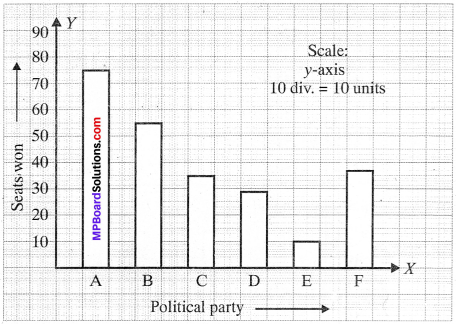 2. Political party ‘A’ won the maximum number of seats.

Question 4.
The length of 40 leaves of a plant are measured correct to one millimetre, and the obtained data is represented in the following table: 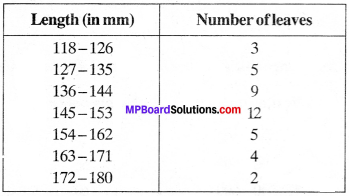 Solution:
1. The given frequency distribution is in discontinuous (inclusive) form. To draw histogram, first it is to be converted into continuous form as given in the table below: 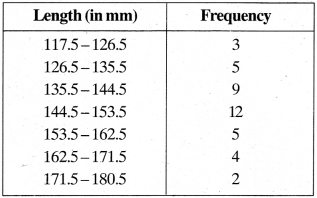 Histogram is shown in Fig. 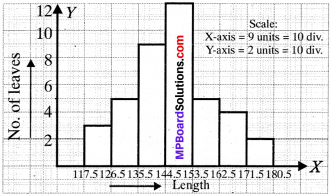 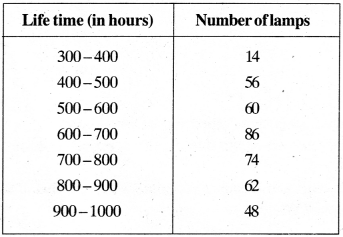 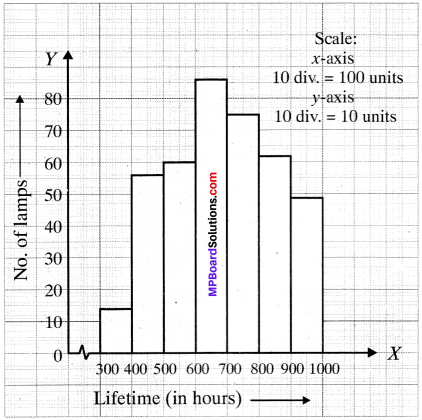 Question 6.
The following table gives the distribution of students of two sections according to the marks obtained by them:

Represent the marks of the students of both the sections on the same graph by two frequency polygons. From the two polygons compare the performance of the two sections.
Solution:

As the marks cannot be negative, we will not join the lines to – 5 but will end on the Y – axis as shown in the figure. 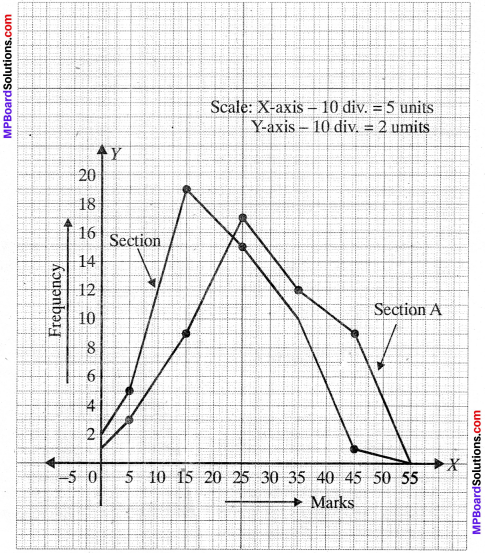 Question 7.
The runs scored by two teams A and B on the first 60 balls in a cricket match are given below: 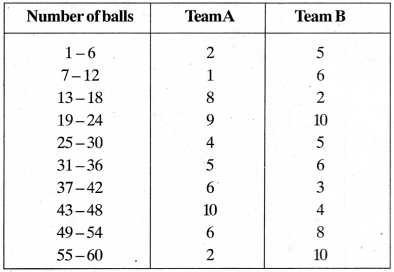 Represent the data of both the teams on the same graph by frequency polygons.
Solution: 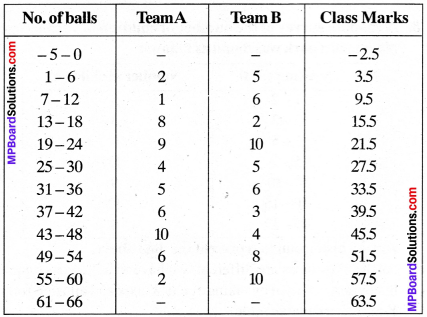 As the runs scored cannot be negative, we will not join the lines to – 2.5 but will end on the Y – axis as shown in the figure. 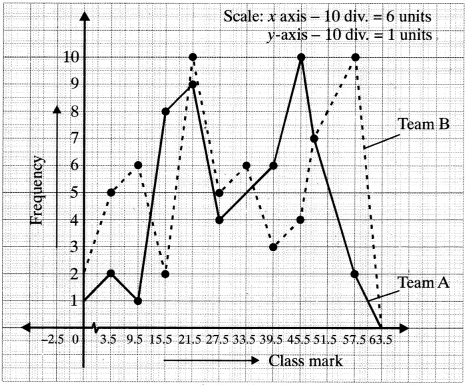 Question 8.
A random survey of the number of children of various age groups playing in a park was found as follows: 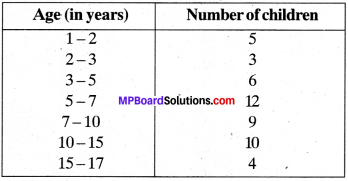 Draw a histogram to represent the data above.
Solution:
As the class sizes are different, we have to adjust the frequency and histogram is drawn by taking age in X-axis and ajiusted frequency in E-axis on a suitable scale. 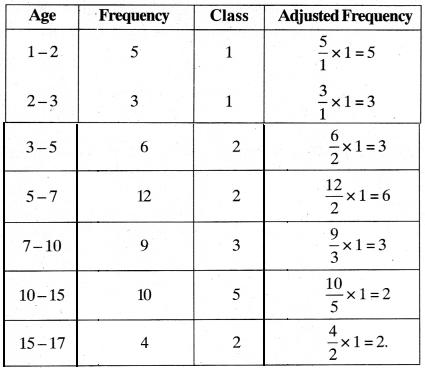 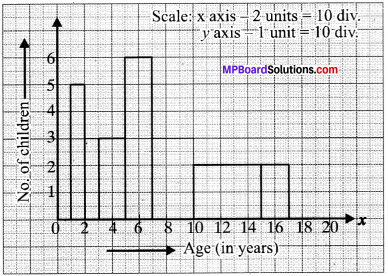 Question 9.
100 surnames were randomly picked up from a local telephone directory and a frequency distribution of the number of letters in the English alphabet in the surnames was found as follows: 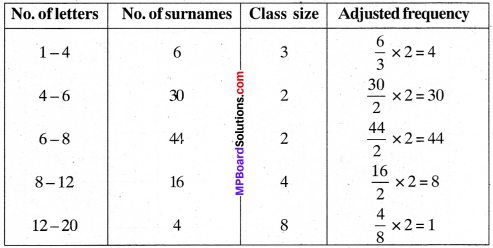 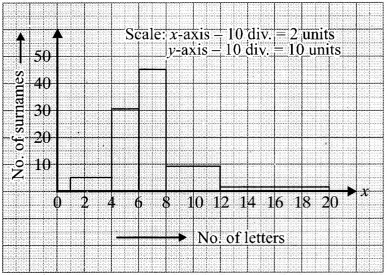 2. The class interval in which the maximum number of surnames lie is 6-8.

Graphical Representation Of Statistical Data:
Through classification and tabulation, we present the data in such a way that the essential characteristics of the raw data become readily under¬stood. The further step in analysis is to represent the statistical data in either of the two ways:

Diagrams and graphs appeal to the eyes and mind of every man. This is the reason why newspapers and periodicals represent diagram in advertisements. There are many different methods used to represent data by means of pictures.

Graphs: The important types of graphs are as follows:

1. Bar Diagram:
This is common type of representation used by businessmen and economists. Census uses it to denote population density etc. in different states. If we have to compare simple magnitudes, we use this graphical representation.

As the name suggests, it consists of wide thick lines whose width is not taken into account. It is only the length of the bar which gives comparative analysis. It is for this reason that we call it one dimensional.

2. Histogram or Frequency Histogram:
A histogram is a graph which represents the class frequencies in grouped frequency distribution by vertical adjacent rectangles with class- intervals as bases and the corresponding frequencies as heights.

Drawing of Histogram:
To draw the histogram of a given frequency distribution, we go through the following steps:

Drawing of Frequency Polygon:
When a grouped frequency distri – bution with equal class-intervals is being given, then to draw the frequency polygon, we go through the following steps:

Example 5:
The birth per thousand in five countries over a period of time is shown below:

Solution:
Take country on X – axis and birth rate per thousand on Y – axis. Bar graph is shown in Fig. 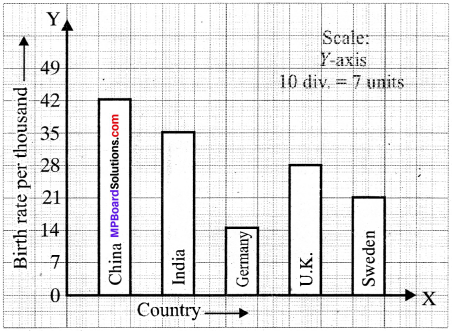 Solution:
1. The required frequency distribution table is given below: 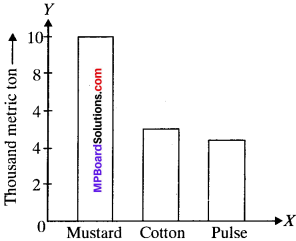 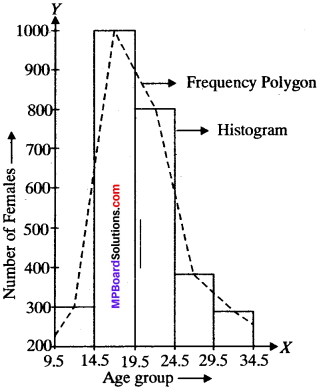 Example 8:
The following table shows the yield of pulses, mustard and cotton in the year 2000-2001 in the State of U.P. Prepare a bar diagram. 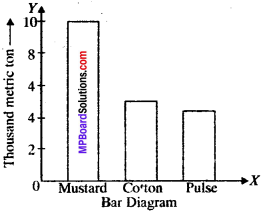 3. On the horizontal line i.e., X-axis, mark number of points equal to number of items (in the given question only three) at the equal distances.

4. Write down items (in the given question i.e., mustard, cotton and pulse) on the X-axis i.e., horizontal line below marked points.

5. Show the other variable, after taking suitable scale, on the vertical line i. e., Y-axis. The biggest number to be shown is 10 metric ton. So we take 10 small divisions i.e., 1 cm on Y-axis equal 2000 metric ton.

Example 9:
Heights of 100 persons (in cm) are given below. Show this by a histogram. 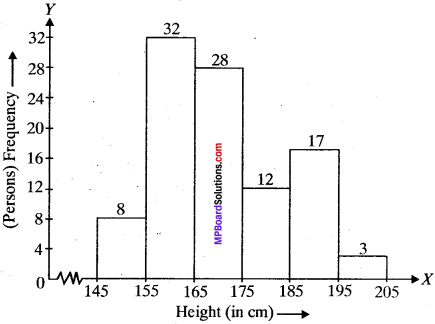 Example 10:
Weights of 60 persons (in kg) are given below. Show this by a frequency polygon. 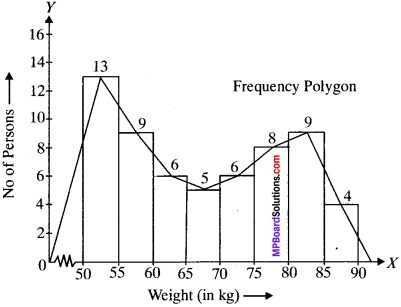 Example 11:
Make a cumulative frequency curve of the following data: 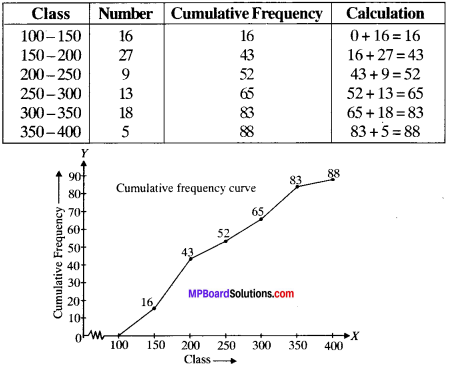 Solution:
The cumulative frequency table for the given distribution is as under: 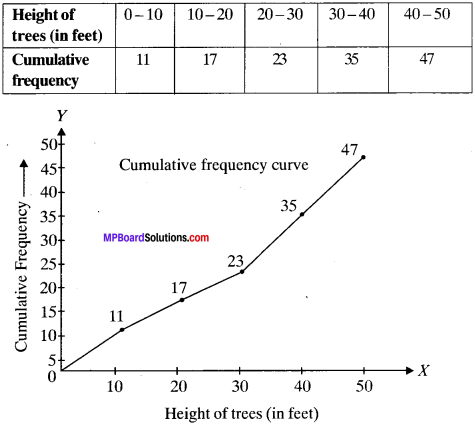 Example 13:
Following are the date of births of students of class 9, born different months, show it by a bar graph. 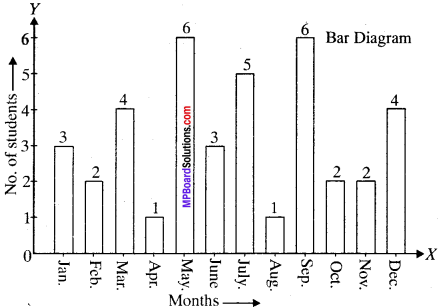 Measures Of Central Tendency:
An average of a data is the value of the variable which describes the characteristics of the entire data and representative of entire distribution. An average is called measure of central tendency because its values lie between two extremes, largest and smallest observation. The measures of central tendency which are useful for analyzing data are.

1. Mean:
The sum of the values of all the observations divided by the total number of observations.
It is denoted by the symbol \(\overline { x } \), read as x bar.

Example 15:
The following table shows the age distribution of cases of a certain disease reported during a year is a particular city. 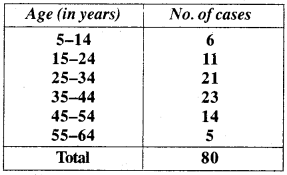 Find the average age (in years) per case reported.
Solution: 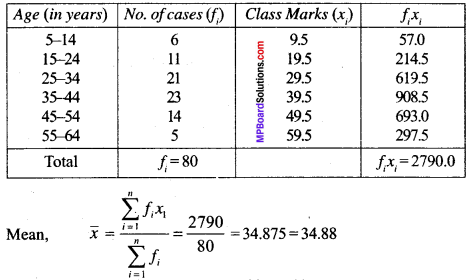 2. Median:
The median is that value of the given number of observa-tions, which divides it into exeactly two parts. After arranging the given data in ascending or descending order of magnitude, the middle value of the observation is called the median. 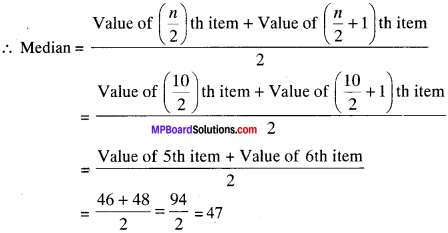 Thus, the median of given data is 47.

Example 18:
The following frequency distribution gives the monthly consumption of electricity of 68 consumers of a locality. Find the median.

Example 19:
Obtain the median for the following distribution:

3. Mode:
The mode is that value of observation which occurs most frequently i.e., an observation with maximum frequency is called the mode.

Example 21:
A survey conducted on 20 households in the following frequency table for the number of family members. 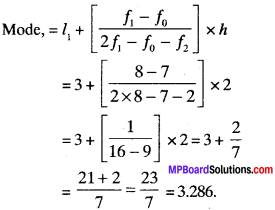