Choose the correct alternative from the options given below:

Question 2.
The main occupation of the people during the Mughal period was:
(a) agriculture
(b) timber industry
(c) foreign trade
(d) None of die above.
Answer:
(a) agriculture

Question 3.
The Museum of Man of Madhya Pradesh is situated at:
(a) Indore
(b) Jabalpur
(c) Bhopal
(d) Ujjain
Answer:
(c) Bhopal

Question 4.
The unit of air pressure is:
(a) Millimeter
(b) mill bar
(c) milligram
(d) centimeters
Answer:
(b) mill bar

III. Fill in the blanks:

Question 5.
Write the names of any three members of the Constituent Assembly.
Answer:

Question 6.
Name the movements of the earth.
Answer:

Question 7.
Give examples of the Chola architecture.
Answer:
The imposing gateways to the temple known as ‘gopurams’ were the special features of the chola architecture. The walls of temples were covered with sculpture and with scenes depicting both gods and men.

Question 8.
Write in brief the religious policy of Akbar.
Answer:
Akbar followed a policy of broad religious toleration. He gave full religious freedom to the people. In 1564 he abolished the Jiazyah which was sometimes used by the ulema to humiliate the,non – Muslims. He abolished the pilgrim’s tax. He gathered at his court a band of talented people and in his Ibadat Khana people of the religions Christian, Zoroastrians, Hindus, Jains even athiests gathered. He set up a new religion which was compounded of many existing religions. This new religion was known as Din-i- Illahi.

Question 11.
What is mixed farming?
Answer:
In mixed forming, cattle are also reared along with crops.

Question 13.
Shivaji had the abilities of an able administrator. Justify.
Answer:
Shivaji was not only a great general but also a good administrator of top order. Shivaji’s administration was of high order which inspired by ideals of public welfare. Though Shivaji was all in all, in all matters, he kept a committee of 8 persons to advise him on the affairs of the state. This committee came to be known as Ashta Pradhan. This was file main feature of Shivaji’s administration.

The main source of income was the tax on the land which amounted to two – fifths of file land produce. Chauth and Sardeshmukhi were also levied on those living outside Maratha kingdom. Chauth was one fourth of the tax which farmers paid such kingdoms by their peasants. Sardeshmukhi was over and above this tax.

It was one tenth of the total revenue, from which these taxes were collected, remained free from the Maratha looting’s and attacks. For the smooth and efficient administration, Shivaji divided his kingdom into a number of provinces known as prants, and each prant into districts and parganas. In this way Shivaji proved himself as an able administrator.

Medicines:
During the Sultanate period Maulana Badmddin, Maulana Sadruddin and Azimuddin were famous physicians. Machandra and Jog were famous surgeons.

Question 14.
Describe the powers of the president of India.
Answer:
The powers of file President –

Write the freedoms given to the citizens of India.
Answer:

Question 15.
Describe the physical features of the continent of Africa.
Answer:
Africa is avast continent from north:
south extending between 37° 14’ N to 34°50’ S latitude. The major part lies within the tropical zone. In fact it is the most tropical of all the continents. There are marked variations in the distribution of rainfall. For example, near the equator, rain falls all the year round, but in die Sahara desert it does not fall at all. Near the Equator there is only one season,’ the hot wet summer but in the northern and the southern parts of Africa climate varies.

There are regions in the South Africa where rain occurs in the winter. There are regions where rain occurs only in summers. Vegetation of Africa – The rainfall is uneven in Africa. The belt lying along the equator on both has hot and wet climate. It rains almost daily and there is only one season – the hot wet summer season. Due to abundance of heat and moisture most of die region is covered with thick forest which is known as the tropical rain forest.

Describe the climate and wild life of Europe.
Answer:
In the Western Europe the climate is marine type. In this climate die winters are cool not cold, and the summers are warm and not hot. Winters are foggy. The rainfall is well distributed all over the year and the temperature is equable. Such climate is found in Central and Eastern Europe. This part of the continent is far from die moderating influence of the westerlies and the ocean. It has Continental climate where it is extreme hot in summer, cold in winter.

The range of temperature is very great Rainfall is moderate. In southern European countries surrounding the Mediterranean the winters are warm and summers are dry. In the summer the region comes under the influence of sub-tropical high pressure belt It, combined with off-shore winds rales any possibility of rain.

In the winter the region comes under the influence of the rain bearing westerlies. In the region situated in the North of Arctic Circle the summers are brief, days are long and warm. The sun is visible at night also. For die major part of the year the region is covered with snow. Precipitation is much less and it is in the form of snow only. This type of climate is known as Tundra climate.

Question 16.
Mark the following in the map of Asia 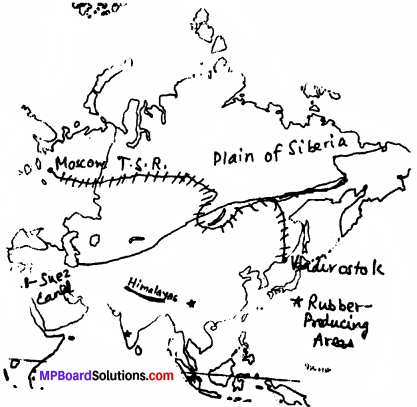