Question 1.
Paheli wondered how time was measured when pendulum clocks were not available?
Answer:
Many times measuring devices were used in different parts of the world before the pendulum clocks became popular. Water clocks, sand clocks and sundials are some examples of such devices.

Question 2.
Boojho wants to know whether there is any device that measures the speed?
Answer:
Yes, speedometer.

Activity – 2
Draw a straight line on the ground with chalk powder or lime and ask one of your friends to stand 1 to 2 m away from it. Let your friend gently roll a ball along the ground in a direction perpendicular to the line. Note the time at the moment the ball crosses the line and also when it comes to rest (Fig.) How much time does the ball take to come to rest? Measure the distance between the point at which the ball crosses the line and the point where it comes to rest. You can use a scale or a measuring tape. Let different groups repeat the activity. Record the measurements in Table. In each case calculate the speed of the ball? 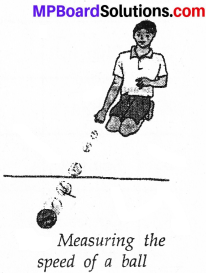 Activity – 3
The unit of speed in the given table is in km/h. Change this speed in to m/s?
Answer:
Speed of some animals. 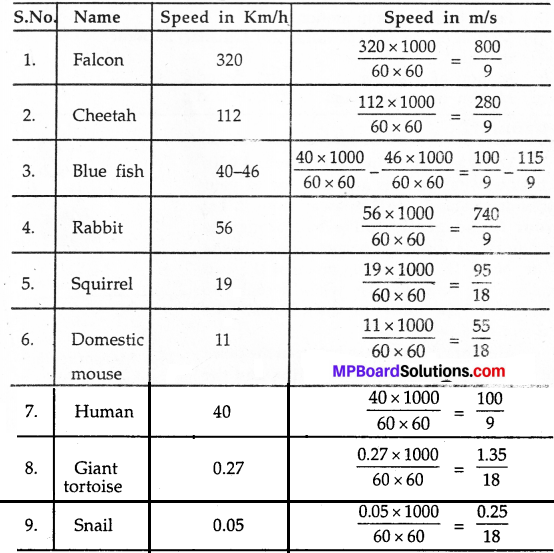 Question 1.
Classify the following as motion along a straight line, circular or oscillatory motion:

Question 2.
Which of the following are not correct?

1. The basic unit of time is second.
2. Every object moves with a constant speed.
3. Distances between two cities are measured in kilometres.
4. The time period of a given pendulum is not constant.
5. The speed of a train is expressed in m/h.

2. Every object moves with a constant speed.
5. The speed of a train is expressed in m/h. 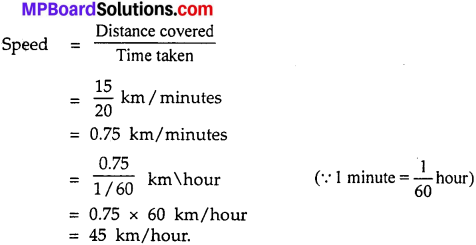 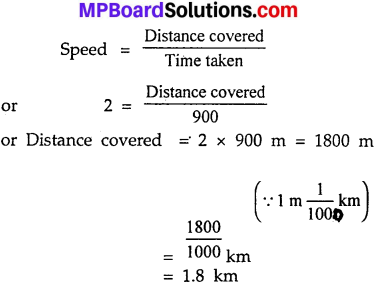 Question 7.
Show the shape of the distance – time graph for the motion in the following cases:

Question 8.
Which of the following relations is correct?

Question 11.
Suppose the two photographs, shown in Fig. (a) and Fig. (b) had been taken at an interval of 10 seconds. If a distance of 100 meters is shown by 1 cm in these photographs, calculate the speed of the blue car? 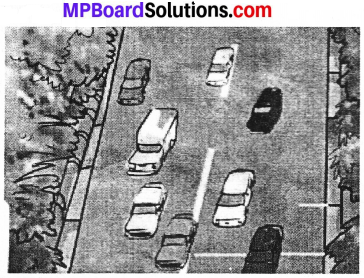 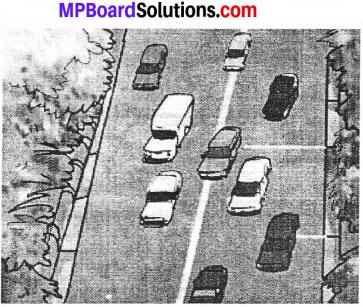 Question 12.
Fig. shows the distance – time graph for the motion of two vehicles A and B. Which one of them is moving faster? 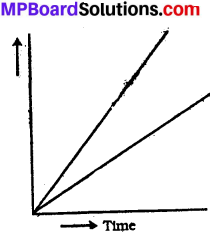 Answer:
Car A is moving faster.

Question 13.
Which of the following distance – time graphs shows a truck moving with speed which is not constant? 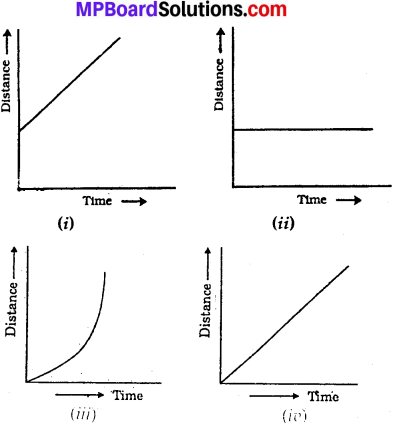 Question (c)
The smallest time interval that can be measured with commonly available clocks and watches is?
(a) 1 second
(b) 1 minute
(c) 1 hour
(d) None of these.
Answer:
(c) 1 hour

Question (e)
The distance moved by a vehicle can be measured by –
(a) speedometer
(b) odometer
(c) regulator
(d) None of these.
Answer:
(b) odometer

Question 3.
Which of the following statements are true (T) or false(F).

Question 1.
Define motion.
Answer:
Motion is the change in position of a body with respect to line and its surroundings.

Question 2.
What type of motion do the vehicles on a straight road perform?
Answer:
The vehicles perform rectilinear motion on the road.

Question 4.
What is uniform motion?
Answer:
Motion of a body along a straight line covering equal distances in equal intervals of time is called uniform motion.

Question 8.
An object is hung from a spring is pulled down and left? What type of motion does the object perform?
Answer:
The object perform oscillatory motion which is also a periodic motion.

Question 10.
What is the unit of speed?
Answer:
Unit of speed is meter per second.

Question 12.
What happens to the speed of your bicycle when you pedal faster?
Answer:
On pedalling fast the speed of bicycle increase.

Question 13.
“Speed of a car is 8 km/h”. What does it mean?
Answer:
When we say that a car is moving with a speed of 80 kilometer per hour, it implies that it will cover a distance of 80 kilometre in one hour.

Question 14.
Define a day?
Answer:
The time between one sunrise and the next is called a day.

Question 15.
What is month ?
Answer:
A month is measured from one new moon to the next.

Question 16.
What is year?
Answer:
A year is fixed as the time taken by the earth to complete one revolution of the sun.

Question 17.
What is bob?
Answer:
The metallic ball is called bob of the pendulum.

Question 18.
What is the use of stop – watch?
Answer:
Stop – watch is used to measure exact time in case of atheletic events as it can be stopped and started any moment.

Question 19.
When you travel in bus or car then, generally, what kind of motion it is?
Answer:
Linear motion.

Question 20.
There is 100 metres line on which two sprinters have to run, when they run, what kind of motion it will be?
Answer:
Linear motion.

Question 21.
See the picture and tell whose speed is more: 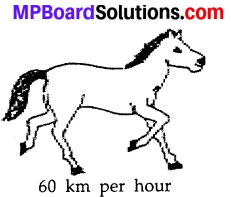 Answer:
Speed of tiger is more than the speed of horse. 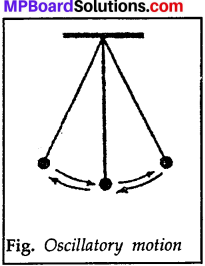 Question 4.
How can we make a pendulum of air one? What is the time – period of a pendulum?
Answer:
We can make a pendulum by suspending a metal ball with a cotton thread. The other end of the thread can be tied to same support. The time taken by a pendulum to complete its to and from movement i.e., one oscillation is called the time period of the pendulum.

From above calculations it is clear that the speed of both the students is same.

Question 6.
What are quartz clocks? Give a diagram of digital clock?
Answer:
Now a days most clocks or watches have an electric circuit with one or more cells. These clocks are called quartz clocks. The time measured by quartz clocks is much more accurate than that by the clocks available earlier. 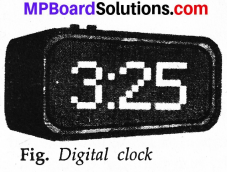 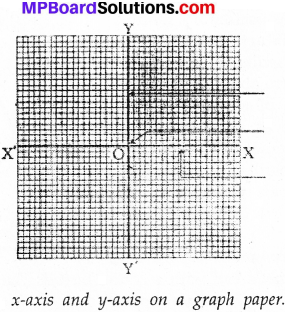 Question 1.
Write briefly about the development of pendulum clock?
Answer:
There is an interesting story about the discovery that the time period of a given pendulum is constant. You might have heard the name of famous scientist Galileo Galilie (A.D. 1564 – 1642). It is said that once Galileo was sitting in a church. He noticed that a lamp suspended from the ceiling with a chain was moving slowly from one side to the other.

He was surprised to find that his pulse beat the same number of times during the interval in which the lamp completed one oscillation. Galileo experimented with various pendulums to verify his observation. He found that a pendulum of a given length takes always the same time to complete one oscillation. This observation led to the development of pendulum clocks. Winding clocks and wristwatches were refinements of the pendulum clocks.

Clocks that measure such small time intervals are used for scientific research. The time measuring devices used in sports can measure time intervals that are one tenth or one hundredth of a second. On the other hand, times of historical everts are stated in terms of centuries or millenniums. The ages of stars and planet are often expressed in billions of years.

Question 3.
Draw a bar graph to show the runs scored by a team in each over? 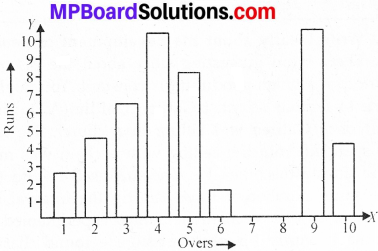 Question 4.
Draw a pie chart to show the composition of air?
Answer: 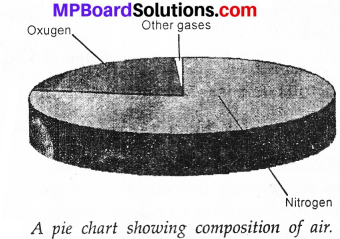 Question 5.
Write down the steps to make a distance – time graph?
Answer:
We can make the graph by following steps:
Step 1.
Draw two perpendicular lines to represent the two axes and mark them as OX and OY as shown in figure.

Step 4.
Mark values for the time and the distance on the respective axes according to the scale chosen. For the motion of the cat let mark the time 1 min, 2 min,..,on the origin x – axis from the origin Similarly, mark the distance 1 km. 2 km… on the y – axis.

Steps 5.
Now you have to mark the points on the graph paper to represent each set of values for distance and time. 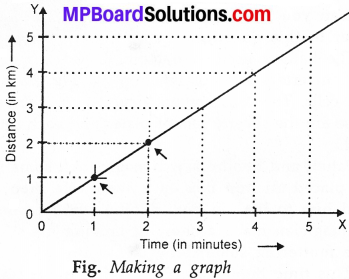