Question 1.
Rearrange the boxes given below to make a sentence that helps us understand opaque objects?

Activity 1.
Look around you and collect as many objects as you can an eraser, plastic scale, pen, pencil, notebook, single sheet of paper, tracing paper or a piece of cloth. Try to look at something far away, through each of these objects. Is light from a far away object able to travel to your eye, through any of the objects?
Record your observations in a table.
Answer: 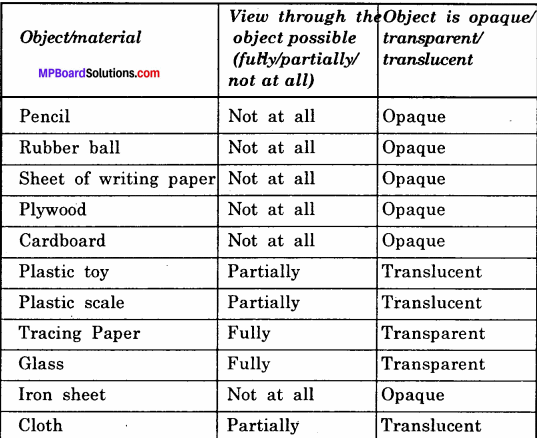 Activity 2.
Describe an experiment which shows that light propagates in a straight line?
Answer:
In a homogeneous medium, light travels in a straight line path. This is called rectilinear propagation of light. This can be demonstrated with the help of three card – board pieces A, B and C with a fine hole at their centres. A candle or a bulb is placed on one side and the boards are arranged such that the holes are in straight lines as shown in figure. Looking from the other side, it is found that the fight from the candle is received only when the three holes are in a straight fine. If one of the card board pieces is displaced, the fight is no longer seen. This clearly demonstrates that the fight travels in a straight fine path.

Things to Think About:

Question (ii)
The transparent object out of the following is –
(a) Water
(b) Moon
(c) Rubber sheet
(d) None of these
Answer:
(a) Water

Question (iii)
Which of the following objects allow more light to pass through –
(a) Translucent
(b) Opaque
(c) Transparent
(d) None of these.
Answer:
(a) Translucent

Question (iv)
The objects which do not allow the light to pass through them at all are called –
(a) Opaque
(b) Translucent
(c) Transparent
(d) None of these.
Answer:
(a) Opaque

Question 3.
Which of the following statements are true (T) or false (F):

Question 7.
Does the flame of a gas stove emit light?
Answer:
Yes.

Question 8.
Give one example of living thing, which emits light?
Answer:
Firefly (Jugnu) is a living source of light.

Opaque objects:
Wax, wood, a heap of salt, a stone.

Question 13.
What is the meaning of shadow?
Answer:
When any obstacte comes in the way of light then the portion on the screen where light does not reach is called shadow.

Question 14.
Why is the shadow of edges of a blade not clear?
Answer:
Because at the edges of the blade, the light is diffracted, i.e., bent slightly in the shadow region. Hence the edges of shadow of blade are not sharp.

Question 15.
Is the medium required for the propagation of light?
Answer:
No, the light can travel in vacuum.

Question 1.
What is light?
Answer:
Light is the external physical reason which makes things visible. Light makes it possible to see the objects but light itself cannot be seen. When light falls on any body, it gets reflected and reaches our eyes and we feed the presence of that body. Light is also a form of energy. It can be converted to other form of energy. Light is propagated in the form of electromagnetic waves. Its wavelength is about 4000 A0 to 8000 A0. It can travel through vacuum with velocity of 3 x 108 m/see.

Question 3.
Give the definitions of

1. Transparent bodies are those through which light can pass freely and through which things can be distinctly seen. For example, air, water, glass, etc.

2. Translucent bodies are those which allow only a part of the light to pass through them and things cannot be seen distinctly. For example, butter-paper, ground glass, etc.

3. Opaque bodies are those which do not allow any light to pass through them and so we cannot through them. For example, stone, iron, wood, etc.

Question 8.
State two properties each of umbra and penumbra.
Answer:
Properties of Umbra:

Question 9.
What is regular reflection?
Answer:
When the light falls on the smooth surface the scattered light rays move in a definite direction. This gives the clear image of the object. This. is called regular reflection.

Penumbra:
The dark circular path is surrounded by a less dark portion. This shadow part is called penumbra.

Question 1.
Draw a diagram to show the position of the screen so that no umbra is formed on it if the source of light is bigger than the obstacle.
Answer:

Question 2.
Describe clearly the event of partial lunar eclipse and explain is cause.
Answer:
The ray diagram shows the various positions of the Moon as it passes through the penumbra and the umbra of the earth during a lunar eclipse. At position A, the moon is yet to enter the penumbra and it looks bright as usual. At position B, it has entered the penumbra. At this position, the moon looks pale, as if it has gone behind the clouds. After some time, a part of the moon enters the umbra. This part is then not visible from the earth, but the remaining part of the moon is still visible. This is called a partial lunar eclipse. Lunar eclipse, always takes place on full moon day but not on all full moon days. 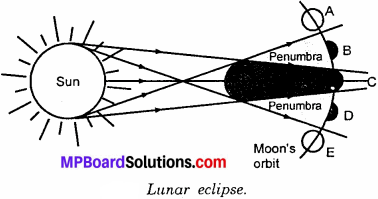 Question 3.
How can you make a pin hole camera? Describe.
Answer:
Take two boxes so that one can slide into another with no gap in between them. Cut open one side of each box. On the opposite face of the larger box, make a small hole in the middle [Fig. (a)]. In the smaller box, cut out from the middle a square with a side of about 5 cm to 6 cm. Cover this open square in the box with tracing paper (translucent screen) [Fig. (b)]. Slide the smaller box inside the larger one with the hole, in such a way that the side with the tracing paper is inside [Fig. (c)]. Your pin hole camera is ready for use.

Question 4.
Describe the working of a its uses?
Answer:
A principle is an obtical instrument which is used to see the overhead objects. In a principls there are two mirror. A and B fixed at the two ends of a vertical tube whose reflecting surfaces are parallel and face each other.

Principle:
It is based on the principle of reflection of plane mirrors which are placed parallel. Light rays are coming through an object and entering from the apperture C. These rays strike on the mirror A at an angle of incidence 45° and is reflected along the axis of the tube striking the mirror at 45° again. This is then finally reflected parallel to their original path and reach is to the eyes of observer. 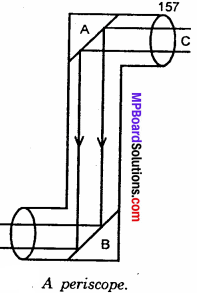