Question 5.
What do you mean by capital account?
Answer:
Capital account is that account of balance of payment which records all such transactions between the residents of a country and rest of the world which cause a change in asset or liability of the country.

Question 8.
What do you mean by protection?
Answer:
When by ending the freedom of foreign trade the ban is put on import and export of goods it is called protection.

Question 9.
Write one advantage of open economy?
Answer:
Investors get the choice of selection among domestic products and foreign goods.

Question 10.
What do you mean by dumping?
Answer:
When the goods are excess than demand then the seller sells this goods in foreign countries on lower rate it is called dumping.

Question 12.
What do you mean by foreign trade multiplier?
Answer:
Foreign exchange rate multiplier tells us how many times increase takes place in national income by increasing in export.

Question 15.
What do you mean by import and export?
Answer:
Import:
When goods and services are brought from the foreign countries to the domestic countries it is called import.

Export:
Goods and services are send to foreign countries from domestic countries.

Question 17.
What do you mean by flexible exchange rate?
Answer:
Flexible rate of exchange:
It is freely determined by the prices of supply and demand in the internal market.

Question 18.
What do you understand by managed floating rate system?
Answer:
It is a hybrid of a fixed exchange rate and flexible exchange rate system. In this system, central bank intervenes in the foreign exchange market to restrict the fluctuations in the exchange rate within certain limits. The aim is to keep exchange rate close to desired target values.

Following are the different points against the fixed exchange rate:
1. Controlled economic system:
For fixed rate of exchange it is compulsory to have strict control over economic system. If it is not possible then we will have to make changes in exchange rate.

2. Unfavourable effect on economic progress :
The main aim of fixed rate of exchange is to maintain stability in exchange rate. In this situation sometimes national income, employment policy, price level etc. are considered as secondary. 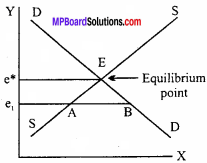 3. Corruption:
To maintain fixed exchange rate many restrictions are imposed in the country. Due to strict restrictions there is always possibility of corruption in the society.

4. Sudden change in the exchange rate:
Some times it becomes evitable to make changes in exchange rate. To keep the exchange rate stable some times currency of the nation becomes weak. In such stuation sometimes the there is devaluation. It has adverse effect on foreign trade and balance of payment.

Following points which can be studied in favour of flexible exchange rate :

1. Independent economic policy : If the exchange rates are elastic any country can make their domestic economic policies internal policies) independently. 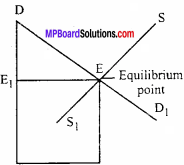 Following points which can be studied against the flexible exchange rate :

1. Adverse economic effect:
If the flexible exchange rate is there then the feeling of insecurity comes in the minds of traders. It has an adverse effect on the foreign trade of the country. The tendency of gambling increases. If the exchange rate is reduced the inflation increases. The level of employment opportunities also go down.

2. Misuse of the resouroes:
If exchange rate goes on changing very often then the resources have to distributed again and again sometimes the resources are used in export sometimes for domestic industries. Due to these changes there is always wastage of resources.

2. Increase in import of machines:
Due to economic planning there is rapid growth in industrialization and progress in agricultural development. For this the need of machines was felt. Due to this reason more import has to be done.

3. Less increase in export:
The export did not increase according to expectations which is one of the causes of unfavourable balance of payment.

4. International loans and investment:
India has taken loan for developmental purpose. To repay the principal amount and interest, foreign exchange has to be paid. It gave rise to the situation of adverse balance of payment.

1. Encouragement to export:
The government should encourage the export.

2. Reduction in import:
India should reduce imports. For this import duty should be raised so, that imported goods will become expensive and people will be discouraged to purchase them. Domestic products should be discouraged reduce the imports. It will give rise to favourable balance of payment.

3. Foreign debt:
To remove adverse balance payment government can take foreign loan. But taking loan is a temporary solution of it.

4. Exchange control:
For keeping the balance payment exchange control is one method. By controlling exchange we can reduce import and increase export.

2. Encouragement to foreign capital:
If the exchange rate is stable foreign exchange can easily flow into the country because investor is not scared of getting less amount than what is fixed. There is no fear of bearing of loss if the rate of exchange is reduced.

5. Essential for export countries:
Some of the country depend on the income coming from export. Half the national income of such countries comes from exports. For countries like England, Denmark, Japan etc. fixed rate of exchange is very essential otherwise there will be adverse effect on its development.

Following points are there against the fixed rate of exchange :

1. Controlled economic system:
For fixed rate of exchange it is compulsory to have strict controlled over economic system. If it is not possible then we will have to make changes in exchange rate.

2. Unfavourable effect on economic progress:
The main aim of fixed rate of exchange is to maintain stability in exchange rate. In this situation sometimes national income, employment policy, price level etc. are considered as secondary.

3. Corruption:
To maintain fixed exchange rate many restriction are imposed in the country. Due to strict restriction there is always possibility of corruption in the society.

Question 7.
Differentiate between devaluation and depreciation.
Answer:
Differences between devaluation and depreciation:
Devaluation means lowering the value of one’s currency in terms of foreign currency. In this case, the domestic value of currency remains constant but its value in terms of foreign currencies fall. On the other hand, the fall in the price of foreign exchange under flexible exchange rate is known . as depreciation. For instance, if the equilibrium rupee – dollar exchange rate was Rs. 45 and now it has become Rs.50 due to rise in demand for dollars, then the rupee has depreciated against dollar.

Question 10.
Should a current account deficit be a cause for alarm? Explain.
Answer:
When a country runs a current account deficit, then he must see whether there has been a decrease in saving, increase in investment or an increase in the budget deficit. There is reason to worry about a country’s long prospects of the trade deficit reflects smaller savings or a larger budget deficit. The deficit could reflect higher private or government consumption. In such cases, the country’s capital stock will not rise rapidly enough to yield enough growth it needs to repay its debt. There is less cause to worry, if the trade deficit reflects a rise in investment, which would build the capital stock more quickly and increase future output.

Question 1.
Write the components of Balance of payment.
Answer:
The Balance of payment of a nation consist of the payments made, within a particular period of time between the residents of that country and the residents of foreign countries. (MPBoardSolutions.com) In other words, it is an account of transactions involving receipts from foreigners on one side and payments to foreigners on the other side. The farmer relates to the international income of a country, they are called “credits” and since the later relates to the international out go, they are call “debits”.

Balance of payment includes all other payments apart from export and import. For example fee of banks, interest, profit, transfer of capital etc. are also included in balance of payment.

3. Impact of imports and exports:
Changes in the import and export quantity of country has a direct impact on the countries exchange rate if export increases in comparison to import the demand for foreign exchange. (MPBoardSolutions.com) If exports increase in comparison to imports the demand for foreign exchange increases and the countries exchange rate becomes favourable. But on the other hand if imports increase then the demand for country currency increases in the foreign country and this becomes unfavourable for the country.

Question 4.
Explain visible and invisible export and import.
Answer:
Visible Import and Exports:
Such goods are included in visible imports and exports whose account is maintained in the register of ports. By seeing them we can find out the values of import and export done throughout the year. (MPBoardSolutions.com) In it only the export and imports of goods are kept.

Invisible Import and Exports:
In invisible export and import we include services which exchange are included. They are banking services, insurance, shipping services, education in foreign, medical facilities, tourism, interest, profit, military assistance, foreign donation, penalty etc. whose account is not maintained on ports are included in it.