Mp Board Class 8 Social Science Solution Chapter 12 Question 4.
Suppose your writing desk is tilted a little. A book kept on it starts sliding down. Show the direction of frictional force acting on it.

Answer:
The frictional force will act parallel to the inclined surface, opposite to the direction of the sliding of book.

Mp Board Class 8 Social Science Chapter 12 Question 5.
You spill a bucket of soapy water on a marble floor accidentally. Would it make it easier or more difficult for you to walk on the floor? Why?
Answer:
It is difficult to walk on a soapy floor because layer of soap makes floor smooth. The coating of soap reduces the friction and the foot cannot make a proper grip on the floor and it starts getting to slip on the floor.

Mp Board Class 8 Science Solution Chapter 11 Question 7.
Iqbal has to push a lighter box and Seema has to push a similar heavier box on the same floor. Who will have to apply a larger force and why?
Answer:
Seema will experience more frictional force because the heavy object will be pressed hard against the opposite surface and produces more friction.

Class 8 Science Chapter 12 Question 9.
Give examples to show that friction is both a friend and a foe.
Answer:
Friction is a friend because:

Friction is a foe because:

Mp Board Solution Class 8 Question 10.
Explain why objects moving in fluids must have special shapes.
Answer:
When objects move through fluids, they have to overcome the friction acting on them. Efforts are therefore made to minimize the friction so objects are given special shapes. Idea of such shapes come from the body structure of birds and fishes which have to move about in fluids all the time. Such shapes are called streamlined. Giving such shapes to the ships, planes and cars is called streamlining.

Question 1.
What role does friction play in the sport of your choice? Collect some pictures of that sport in action where friction is either supporting it or opposing it. Display these pictures with proper captions on the bulletin board of your classroom.
Answer:
Do yourself.

Question 2.
Imagine that friction suddenly vanishes. How would the life be affected. List ten such situations.
Answer:
Do yourself.

Question 3.
Visit a shop which sells sports shoes. Observe the soles of shoes meant for various sports. Describe your observations.
Answer:
Do yourself.

Question 4.
A toy to play with:
Take an empty matchbox. Take out its tray. Cut a used refill of a ball pen of the same width as the tray as shown in the figure below. Fix the refill with two pins on the top of the tray as shown in Fig. 12.2. Make two holes on the opposite sides of the tray. Make sure that the holes are large enough to allow a thread to pass through them easily. Take a thread about a metre long and pass it through the holes as shown. Fix beads at the two ends of the thread so that it does not come out. Insert the tray in the outer cover of the matchbox. Suspend the match box by the thread. Leave the thread loose. The match box will start falling down due to gravity. Tighten the thread now and observe what happens. Explain your observation. Can you relate it to friction? 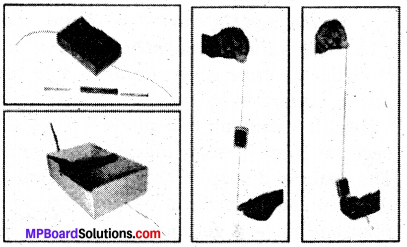 Question l.
What is friction?
Answer:
The force acting equal and opposite surfaces? Does it depend on the smoothness to the relative motion of two objects in of the surface?
contact is known as friction.

Question 2.
How is friction caused? the surfaces. Yes, it depends on the
Answer:
Friction is caused by the irregularities smoothness of the surface. It is the least on the two surfaces in contact. the smoothest surface.

Question 8.
Why is friction called an evil?
Answer:
Friction is an evil. It causes a lot of problems for us. It wears out the objects or materials on which it acts. The soles of our shoes get worn due to friction. The floors, machines, their parts, clothes, metals etc., get weared due to the friction they bear. Friction spoils the parts of the machines. They are, therefore, regularly lubricated to minimise friction. Friction produces heat, which further damages the objects on which it is exerted. The grooves of the tyres are finished due to regular friction they bear, which is offered by their regular motion on roads. Except this wear and tear, friction utilize a large amount of energy spent to overcome it.