Question 3.
How do you explain the absence of aldehyde group in the penta acetate of D-glucose ? ,
Answer:
When glucose (α) or (β) is treated with acetic anhydride it forms a penta acetyl derivative which does not contain a free – OH group at C – l, it cannot be hydrolysed in aqueous solution to give open-chain aldehyde form and hence glucose penta-acetate does not react with NHC2OH to form glucose oxime.

Question 4.
The melting points and solubility in water of amino acids are generally higher than that of the corresponding haloacids. Explain.
Answer:
The amino acids exist as Zwitter ions

Question 7.
What products would be formed when a nucleotide from DNA containing thiamine is hydrolysed ?
Answer:
Hydrolysis products:
2 – deoxy – D – ribose (Sugar) + Thiamine (Base) + Phosphoric acid.

Question 8.
When RNA is hydrolysed, there is no relationship among the quantities of different bases obtained. What does this fact suggest about the structure of RNA ?
Answer:
When RNA is hydrolysed, there is no relationship between the quantities of four bases, i.e., cytosine (C), guanine (G), adenine (A) and uracil (U) are obtained, therefore, the base pairing principle, i.e., (A) pairs with (T) and (C) pairs with (G) is not followed (as in DNA). This suggest that unlike DNA (a double stranded structure), the RNA has a single stranded molecule.

Question 1.
What are monosaccharides ?
Answer:
Monosaccharides are the carbohydrates which cannot be hydrolysed further to give simpler units of poly hydroxy aldehydes or ketones.

Starch is stored in seeds and acts as the reserve food material for the small plant unless it is capable of making its own food by photosynthesis.

Question 6.
What is glycogen ? How is it different from starch ?
Answer:
(i) The carbohydrates are stored in animal body as glycogen. It is present in liver, muscles and brain. Enzymes break the glycogen down to glucose when the body needs glucose.

Question 7.
What are the hydrolysis products of:
1. Sucrose
2. Lactose
Answer:
1. Glucose and fructose:

(iii) A process that changes the physical and biological properties of proteins without affecting the chemical composition of proteins is called denaturation. The denaturation is caused by certain physical and chemical treatment such as changes in pH, temperature, presence of some salts or certain chemical agents.

Question 14.
What type of bonding helps in stabilizing the a-helix structure of proteins ?
Answer:

(Refer your NCERT text-book for details and structure.)

Question 17.
What are enzymes ?
Answer:
The enzymes are globular proteins which act as bio-catalyst. They are very specific and efficient in their action. Almost all the reactions that occur in the body are catalyzed by enzymes.

Question 19.
How are vitamins classified ? Name the vitamin responsible for the coagulation of blood.
Answer:
On the basis of solubility in water or fat, the vitamins are generally classified into two types:

Question 20.
Why are vitamin-A and vitamin-C essential to us ? Give their important sources.
Answer:
Vitamin – A:
It is essential for us because its deficiency causes Night blindness and Xerophthalmia (Hardening of cornea of eye).

Vitamin – C:
It is essential for us because its deficiency causes Scurvy (bleeding gums), Tooth decay’s and Pyorrhoea etc.

Functions:
(i) DNA is responsible for transmission of hereditary effects from one generation to another. This is due to unique property of replication, during cell division and two identical DNA strands are transferred to the daughter cells.

(ii) DNA and RNA are responsible for synthesis of all proteins needed for the growth and maintenance of our body. Actually, the proteins are synthesized by various RNA molecules (m-RNA and t-RNA etc.) in the cell but the message for the synthesis of a particular protein is present in DNA. 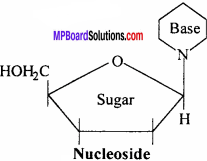 Question 23.
The two strands in DNA are not identical but are complementary. Explain.
Answer:
The two strands in DNA molecule are held together by hydrogen bonds beetween purine base of one strand and pyrimidine base of the other and vice-versa. Because of different sizes and geometries of the bases, the only possible pairing in DNA are G (guanine) and C (cytosine) through three H-bonds i.e., (C = G) and between A (adenine) and T (thiamine) through two H-bonds i.e., (A=T) (for figure refer your NCERT text book). Due to this base pairing principle, the sequence of bases in one strand automatically fixes the sequence of bases in the other strand. Thus, the two strands are complimentary and are not-identical.

Question 25.
What are the different types of RNA found in the cell ?
Answer:
There are three types of RNAs:

Question 3.
Enzyme which enhances the conversion of glucose to ethanol is:
(a) Zymase
(b) Invertase
(c) Maltase
(d) Diastase.
Answer:
(a) Zymase

Question 5.
Change in optical rotation of a freshly prepared solution of sugar after some time is called:
(a) Optical activity
(b) Inversion
(c) Specific rotation
(d) Mutation.
Answer:
(b) Inversion

Question 10.
Which carbohydrate is an essential constituent of plant cells:
(a) Cellulose
(b) Starch
(c) Sucrose
(d) Vitamin.
Answer:
(b) Starch

Question 13.
Which sugar is present in maximum amount in human blood:
(a) d-fructose
(b) d-glucose
(c) Sucrose
(d) Lactose.
Answer:
(b) d-glucose

Question 4.
Answer in one word / sentence:

Functions caused by the above Vitamins :
(a) Vitamin-A : For vision and growth develops resistance against diseases.
(b) Vitamin-D : For bones, control of metabolism of calcium and phosphorus.
(c) Vitamin-E : Virility in man and reproduction.
(d) Vitamin-K : Coagulation of blood.

Question 5.
Give the names and functions of any four proteins.
Answer:
Proteins and their functions:
(1) Haemoglobin : Transport of oxygen from lungs to different tissues of body.
(2) Myosin : For motion of muscles
(3) Pepsin : As a catalyst in bio-chemical reactions
(4) Keratin : Present in hairs, nails and teeth.

Question 6.
What are enzymes ? Give applications.
Answer:
Enzymes are complicated organic molecules which are produced by living cells and are also called biological catalysts. They are complex nitrogenous molecules, unlike inorganic catalysts, they take part in the reaction and get destroyed.
Example:
Enzyme invertase catalyse the hydrolysis of sucrose.

Factors affecting the activity of catalyst:

Functions of enzymes:
Enzymes play a very important role in many biological reactions. The names of some important enzymes and the biochemical reactions catalysed by them are given below:

1. Role of enzymes in the process of digestion:
Enzymes play an important role in digestion resulting in breakdown of macro molecules into simple molecules.

Question 7.
What are monosaccharides ? Explain with examples.
Answer:
These are the simplest carbohydrates which cannot be hydrolysed into small molecules. Their general formula is CnH2nOn (there are some exceptions also). Here n = 2 to 10. These are sweet in taste and soluble in water. These contain either one – CHO group or one > C = O group.

Question 8.
What are proteins ?
Answer:
The word protein is derived from the greek word protious (Protious = to take the first) i.e. first or very important. Proteins are high molecular mass nitrogen containing complex organic compounds found in the protoplasm of all animal and plants.
Chemically protein is the condensation polymer of a-amino acid.

Glucose is the unit of carbohydrates which is responsible to provide energy. Glucose decomposes slowly with the help of oxydase enzyme present in the body into CO2 and water. Energy is released in this process.

Non-essential Amino Acid: Amino acids which can be synthesized in our body are known as non-essential amino acid.
Example: Glycine, Glutamic acid.

Question 11.
Explain the formation of amide and peptide bonds in the structure of proteins.
Answer:
(1) Amide bond:
Protein is a complicated organic compound which is formed by the combination of different amino acids. When the – CONH – link resulting from the reaction between a compound containing a carboxylic group (- COOH) and that with an amine group (- NH2) it forms a amide bond.

Question 12.
Define polysaccharides. Give examples also.
Answer:
Polysaccharides are natural isomers which have molecular weight up to many lacks, General formula of polysaccharides is (C6H10O5)n   where value of n is from 12 to thousands. These are complex material which are formed by condensations of monosaccharides. These compounds contain glycocydic bonds.
Example : Starch, cellulose etc.

Question 13.
What is invert sugar ?
Answer:
Cane – sugar is dextro – rotatory [D or +] which gives equimolar mixture of monosaccharides. This mixture is laevorotatory [D or-]. Hence the mixture of glucose and fructose obtained as a result of hydrolysis of cane-sugar is called as invert sugar.

Question 15.
Give the pyranose structure of sucrose and maltose.
Answer:
In sucrose two monosaccharides (glucose and fructose) are combine through a glycosidic bond which is present between C1 of α-glucose and C2 of β-fructose.

Whereas maltose molecule is obtained by the condensation of two glucose molecules.

Question 17.
What do you understand by nucleoside and nucleotide ?
Answer:
Nucleoside: When a purine or pyrimidine base joins with a pentose sugar molecule, then it is known as nucleoside.

3. Polysaccharides:
General formula of polysaccharides is (C6H10O5)n where value of n is from 12 to thousands. These are complex material which are formed by condensation of monosaccharides. Example: Starch, Cellulose etc.

During denaturation the protein molecule uncoils from an ordered and specific conformation into a more disordered conformation. Denaturation takes place when proteins are heated or treated with acids, bases, alcohols, KI, urea, acetone etc. or when exposed to UV or X-ray radiations.

Question 20.
Write functions of vitamin B and name two diseases caused due to its deficiency.
Answer:
Vitamin B include a group of vitamins which are as follows:
‘Vitamin-B1 (Thiamine), Vitamin – B2 (Riboflavin), Vitamin B3 (Pentothenic acid), Vitamin-B6 (Pyridoxine), Vitamin B12 (Cyano cobalamin)

Question 21.
What are vitamins ? Name the vitamins whose deficiency lead to following diseases:

Question 22.
Write about the following:

Question 24.
Write two-two source of vitamin A and C. Write one-one disease caused due to its deficiency.
Answer:

Question 25.
Write the functions of vitamin A, D, E and K.
Answer:

Question 26.
Write functions and sources of the following bio-molecules/elements :

2. Vitamin C: Ascorbic acid
Deficiency disease: Scurvy Other examples are vitamin B2, B6, B12 and K.

It is of two types:

Components of RNA:
RNA contains Ribose and nitrogen base like Adenine (A), Guanine (G), Uracil (U) and Cytosine (C).

Question 2.
What are carbohydrates ? Write its classification and four main functions.
Answer:
Definition:
Optically active polyhydroxy aldehydes or ketones or substances which yield these on hydrolysis are known as carbohydrates.
Example: Glucose, starch, cellulose, sucrose etc. 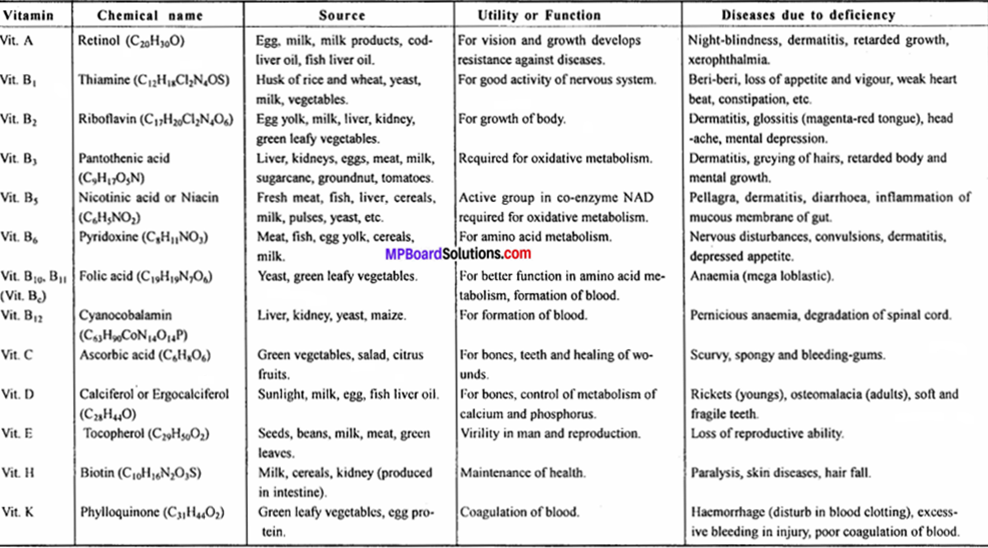 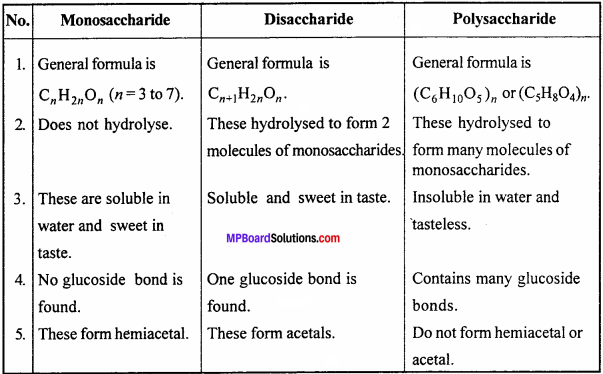