Question 2.
Why does the conductivity of a solution decrease with dilution? (NCERT)
Answer:
Because number of ions per cm3 decreases.

Question 3.
Explain, how rusting of iron is envisaged as setting up of an electrochemical cell? (NCERT)
Answer:
Formation of carbonic acid takes place on the surface of iron

Question 4.
Arrange the following metals in the order in which they displace each other from the solution of their salts. Al, Cu, Fe, Mg and Zn. (NCERT)
Answer:
A metal with lesser standard potential (more reactive) can displace the other metal from solution of its salts.

Question 9.
Write Ohm’s law.
Answer:
According to Ohm’s law, “It states that potential difference across the conductor is directly proportional to the current (I) flowing through it” i.e.,
Mathematically, it can be written as:
I ∝ V
V = IR (R = Resistance, unit = ohm, Q)

Question 11.
What is galvanization? Explain.
Answer:
Iron is coated with the layer of zinc to protect it from rusting. This process is known as galvanization. The galvanized iron articles keep their lustre due to the coating of invisible protective layer of basic zinc carbonate, (ZnCO3) or zinc hydroxide (Zn(OH)2).

Question 12.
Why is it not possible to determine the Electrode potential of a single half cell?
Answer:
Because Electromotive force of two electrodes containing a complete circuit can be measured.

Question 14.
What is the relation between equivalent conductance and specific conductance?
Answer:
Λceq = \(\frac {1ooo×k}{c}\)

Question 2.
What is salt bridge ? Write its two functions.
Answer:
‘U’ shaped tube filled with KCl or KNO3 in Agar – Agar solution or gelatin, is known as salt bridge. It connects the two half cell. 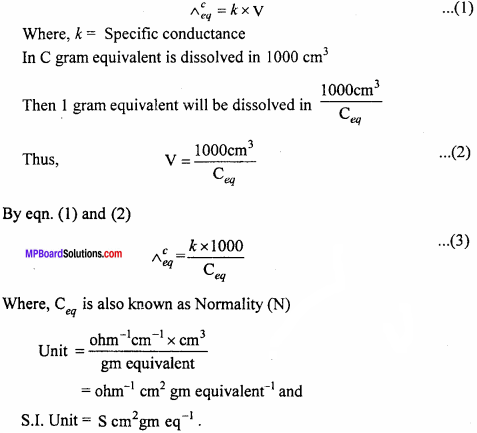 Question 8.
What is molar conductance?
Answer:
Molar Conductivity:
The molar conductivity of a solution at definite concentration of (or dilution) and temperature is the conductivity of that volume which contains one mole of the solute and is placed between two parallel electrodes 1 cm apart and having sufficient area to hold whole of the solution. It is denoted by Λm.
Mathematically,
Λ m=k × V .. (1)
Where, V is the volume in ml in which one gram mole of substance is dissolved.
If M is molarity or m moles are dissolved in 1000 ml. 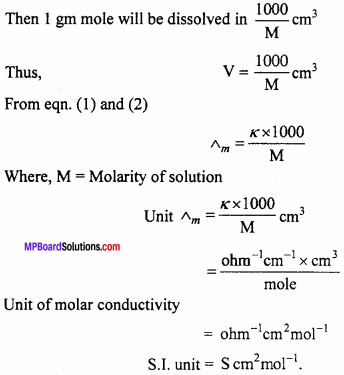 Question 9.
Define cell constant. Develop a relation between specific conductance and cetfconstant.
Answer:
Cell constant:
In any conductive cell, the distance between two electrodes and surface area of .electrode A are constant. The ratio of l and a is called cell constant i.e.
cell constant = \(\frac { l(cm) }{ a{ ({ cm) }^{ 2 } } }\)
Unit of cell constant is cm-1 and it is generally expressed by x. 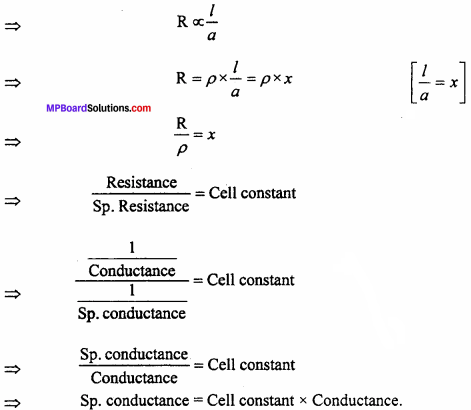 With increase in temperature all these three effects decrease and average kinetic energy of ions increases. Thus, with increase of temperature, resistance of solution decreases and hence conductance increases.

Question 11.
What is an Electrolytic cell and how does it work?
Answer:
Electrolytic cells:
In these cells electric current is supplied through an external source, as a result of which chemical reactions take place which is called electrolysis like Electrolysis of water, NaCl, Al2O2 etc. For example in Solvay trough cell electrode is immersed in sodium chloride solution and electric current is passed due to which NaCl electrolyses. At mercury cathode sodium is released and at anode chlorine is released. Sodium forms amalgam with mercury and is taken out of the cell.

Cell potential = Standard electrode potential of R.H.S. electrode – Standard electrode potential of L.H.S. electrode
Thus, Ecell = Eredn. (right) – Eredn. (left)
Ecell = Eredn.(cathode) – Eredn.(anode)
EMF of a cell is measured by connecting the voltmeter between the two electrodes of a cell. EMF of a cell depend on the concentration of solutions of both half cells and nature of the two electrodes. For example, In Daniel cell, concentration of CuSO4 and ZnSO4 solutions in the two half cells is 1M and at 298 K EMF of the cell is 1.10 volt. 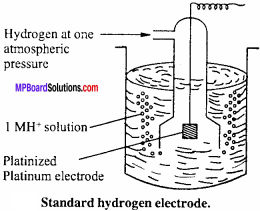 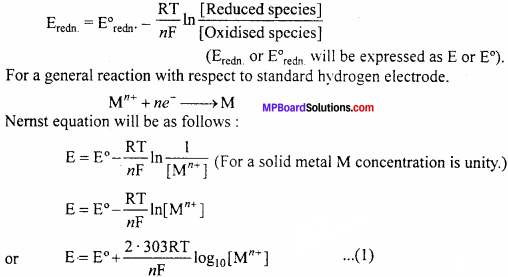 Faraday’s second law of electrolysis:
It states that, “When the same quantity of electricity is passed through solutions of different electrolytes connected in series, the weight of the substances produced at the electrodes are directly proportional to their equivalent mass.”

For example, for CuSO4 solution and AgNO3 solution connected in series, if the same quantity of electricity is passed, then 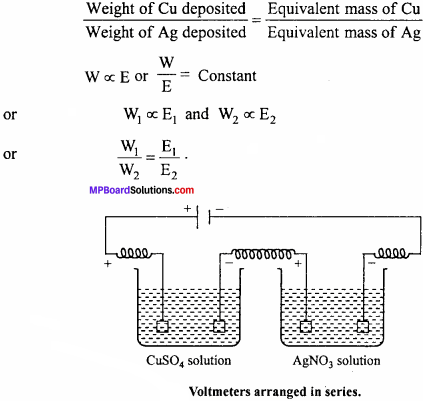 Question 4.
What is rusting of iron? Describe Electrochemical theory of rusting. An^Corrosion : Process by which the layers of undesirable compounds are formed on the surface of a metal on its exposure to atmospheric condition are called corrosion. Rusting of iron is an example of corrosion, chemically it is Fe2O3xH2O.

Electrochemical theory of rusting :
Anode reaction:
On one spot of iron sheet, oxidation takes place and this spot behaves as an anode.
Fe(s) → Fe2+(aq) + 2e–; E° = + 0.44 V.
The electrons which are released at this spot travel through the metal and reach another spot on the metal which acts as cathode. These electrons cause the reduction of oxygen in the presence of hydrogen ions (H+). H+ ions are formed due to decomposition of carbonic acid formed by dissolution of CO2 in H2O.
H2O + CO2 → H2CO3
H2CO3 ⇌ 2H+ +CO32-+

Fe2Fe2+ ion formed travel on the surface of article and react with more oxygen in the presence of H2O. This results in the formation of ferric oxide.

Question 5.
What is Kohlrausch law? Give its two applications.
Answer:
Kohlrausch in 1875 gave a generalisation known as Kohlrausch’s law, “At infinite dilution when the dissociation of the electrolyte is complete, each ion makes a definite contribution towards molar conductance of the electrolyte irrespective of the nature of the other ion with which it is associated.”
Or
“The value of molar conductance at infinite dilution is given by the sum of the contributions of ions (cation and anion).”
Mathematically,

Where, λ∞+ and λ∞– are ionic contributions or ionic conductances of cation and anion while v+ and v–are the number of cations and anions in the formula unit of electrolyte.

(ii) Determination of degree of dissociation:

Question 6.
Draw a labelled diagram of Daniel cell and explain ceLl reaction.
Or, Draw a labelled diagram of electrochemical cell and write cell reaction.
Answer:
Electrochemical cell:
In the redox reactions, the transfer of electrons between oxidizing and reducing agents occurs through wire and thus chemical energy changes into electrical energy. The device on which chemical energy changes into electricaL energy is called electrochemical cell. These are also known as galvanic or voltaic cells. Working of these cells can be understood with the example of Daniel cell. 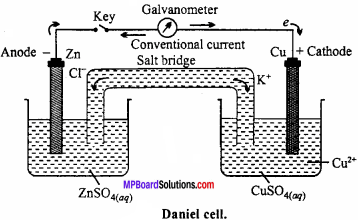 Daniel çell:
In this cell, Zn rod is dipped in ZnSO4 solution and Cu rod in copper sulphate solution. Both solutions are connected through KCL salt bridge. When Zn and Cu electrodes are connected by wire and galvanometer, flow of electrons from Zn to Cu occurs. Zinc atoms change into Zn2+ and electrons reach at Cu electrode, where Cu2+ changes into Cu metal and this copper deposits on electrode. 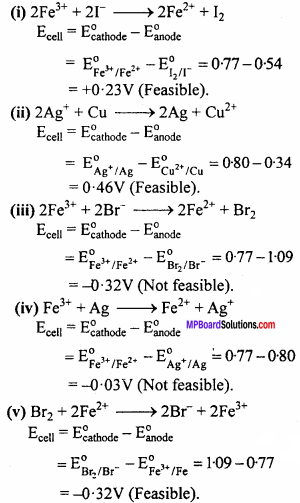