Question 1.
Why should not medicines be taken without consulting doctors? (NCERT)
Answer:
The drugs or medicines have side effects also. These side effects arise because the drug may bind to more than one type of receptor. Further their wrong choice and over – dose can cause havoc and even may cause death. Therefore, it is must that the medicines should not be given without consulting doctors.

Question 2.
Explain the term, target molecules or drug targets as used in medicinal chemistry. (NCERT)
Answer:
Drugs taken by a patient interact with macromolecules such as proteins, carbo-hydrates, lipids and nucleic acids and these are called drug targets. These macromolecules or drug targets are known to perform several role in the body. The drugs are designed to interact with specific targets so that these have least chances of effecting the other targets. This minimises the side effects and localises the action of the drug.

Question 5.
Sleeping pills are recommended by doctors to the patients suffering from sleeplessness but it is not advisable to take its doses without consultation with the doctor. Why? (NCERT)
Answer:
Sleeping pills contain drugs that may be tranquilizers or anti – depressant. They affect the nervous system, relieve anxiety, stress, irritability or excitement. But they should strictly be used under the supervision of a doctor. If not, the uncontrolled and overdose can cause harm to the body and mind because in higher doses, these drugs act as poisons.

Question 6.
With reference to which classification has the statement, “ranitidine is an antacid” been, given? (NCERT)
Answer:
This statement refers to the classification of drugs according to pharmacological effects of the drugs because any drug which is used to neutralise the excess acid present in the stomach will be called an antacid and ranitidine prevents the interaction of histamine with the receptors present in the stomach wall. Histamine stimulates the secretion of pepsin and HCl in the stomach.

Question 8.
How are synthetic detergents better than soaps? (NCERT)
Answer:

Answer:
1. Cationic detergents are those which have cationic hydrophilic group. These are mostly acetates, chlorides or bromides of quaternary ammonium salts. For example, cetyltrimethyl ammonium chloride.
[CH3(CH2)15N(CH3)3]++Cl–

2. Anionic detergents are those which have anionic hydrophilic group. These are of two types:

Question 12.
Explain each with an example.

These are of two types :

2. Analgesic:
Drugs which give relief from pain or reduced pain are called analgesics.
Types and Examples :

Question 13.
What is preservative? Give the name and formula of any two preservatives.
Answer:
A preservative is defined as “A substance added to food, capable of retarding the growth of micro – organism which deteriorate the food within no time.
The preservative may be natural compounds such as sugars, salt, acids, etc. as well as they may be synthetic i.e. Sodium benzoate.
Example:

Question 15.
What do you understand by antipyretics?
Answer:
These are used to lower down the body temperature in high fever. These drugs are used both as antipyretic and as analgesic, example aspirin (acetylsalicylic acid), paracetamol (4 – acetamido phenol), phenacetin (4 – ethoxy acetanilide), analgin, etc.

Question 16.
What are Antibiotics? Write name of any two antibiotics. (MP 2018)
Answer:
Antibiotics:
are chemical substances which are produced by micro – organisms like bacteria, fungi, actinomycetes and destroy some other micro – organisms are like, virus, ricketsia or obstruct their growth.
Example : Penicillin, Streptomycin etc.

Question 17.
What is Immune system? How does it develop?
Answer:
For the destruction of bacteria or antigen in our body, lymphocytes are developed which are known as Immune. These are a specific type of white blood cells. These prepare and release a special type of protein called globulin to destroy the poison. These proteins destroy the attacking virus, bacteria and poisonous substances. Lymphocyte bind the antigen and themselves divide fast by which immunization increase and effect of antigen is destroyed.

Question 18.
What are antiseptics?
Answer:
Antiseptics:
An antiseptic kills the bacteria or prevents the multiplication of bacteria. These also prevent pus formation. Antiseptics do not harm living tissues. Tincture iodine, phenol (0 – 2%), dettol, chloroxylenol, etc. are applied on skin and bactrim, septran, etc. are taken orally as pills. Bad odour coming out of the wounds due to bacterial decomposition on the body or in the mouth are also reduced by the use of antiseptics. For such purposes, antiseptics are usually incorporated in face powder, breath purifiers, deodorants, etc. to reduce the intensity of bad odour.

Neem soaps containing the extract of neem seeds are also used as antiseptic soaps. Dettol is a mixture of chloroxylenol and terpineol in a suitable solvent is commonly used antiseptic. Bithionol antiseptic is added to soap to provide antiseptic properties to it. Tincture iodine is 2 – 3% solution of iodine in alcohol and water.

Question 19.
What do you mean by Antibiotics? Name the first antibiotic.
Answer:
Chemical substances which are produced by mirco – organism and are used to destroy other micro-organism, are called antibiotics. These chemicals checks the life cycle of bacteria and stop reproduction resulting in release from disease. Antibiotics are almost specific for kinds of illness.

The first antibiotic penicillin was discovered by Alexander Fleming in 1928. He was awarded Nobel prize in 1945 for this important discovery. General formula of penicillin is C9H11N2O4S – R. It is a narrow spectrum drug and used in bronchitis, pneumonia, sore throat and abcesses. Before administration, tolerance has to be tested. 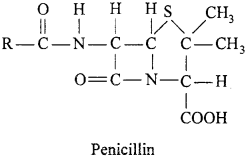 By changing the group R, different penicillin are prepared.

Question 21.
Give definition of antihistamine drug with name and uses.
Answer:
These are amines which controls the allergy effect produced by histamines. Histamine is found in all body tissue and is also released in allergic conditions due to which allergic responses such as tissue inflammation, asthma, itching etc. are introduced in the body. Drugs which prevent the production of histamine and fight against the allergy effects are called antihistamines.
Example:
1. Entergon : It is used in strong allergic conditions.

Answer:
1. Antifertility drugs:
Drugs which are used to check pregnancy in women are called antifertility drugs. Actually, these drugs control the female menstrual cycle and ovu-lation. The antifertility agent in these drugs are steroids and these drugs are used in the form of oral pills. A mixture of synthetic estrogen and progesterone derivative are used as birth control pill. These are more effective than the natural hormone. Ethynylestradiol and nore- thindrone are the content of common contraceptive pills.

Detergents are surface active compounds which decreases surface tension of water. When these compounds are dissolved in water they scatter dirt particles leaving the surface clean.

Properties of detergents : Detergents are superior to soap.

Uses of detergents:
Detergensts act as cleansing agent. Like soap it can be used for cleaning cotton, woollen, silky and synthetic fibre cloth and for cleaning other domestic items.

3. Antacids:
Substance which remove the excess acid in the stomach and raise the pH to appropriate level are called antacid Calcium carbonate, Sodium bicarbonate, Magnesium hydroxide or Aluminium hydroxide is used in the form of aqueous suspension or tablets to treats hyperacidity. These substances react with excess hydrochloride acid and neutralizes it partially. Nowadays Omeparazole and Lansoparazole are prescribed as antacids. 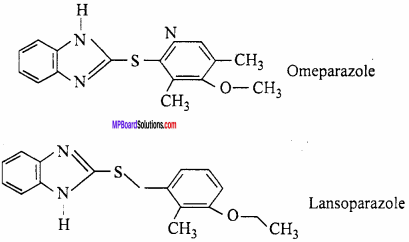 4. Sedatives:
These are given to those patients who are violent and mentally agitated.
Example:

Question 2.
Write notes on the following:

Answer:
1. Tranquillizers:
Tranquillizers are the chemical substances which affect higher centres of central nervous systems and reduce anxiety and tension. Tranquillizers are also called psychotherapeutic drugs. These drugs make the patient passive temporarily so that emotional distress or depression is reduced. The patient restores confidence. These drugs if taken for long – time make the person habitual. Luminal, Barbituric acid, seconal, equanil, etc. are the drugs of this class. These are components of sleeping pills. 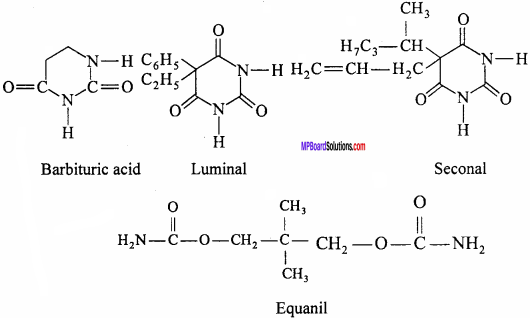 2. Antidepression:
These are given to patient for boosting their morals in the stage of acute depressions. Some mood elevator drugs are vitellin, methadone, cocaine, etc. These act on the central nervous system. Person becomes healthy by its use and de-velop confidence. These should be taken by the advice of doctor. Tophrenil is one such medicine. The amphetemin group of medicine help to upraise the mental level. Its common example is benzedine.

Question 5.
Give one example of Acidic dye and Basic dye.
Answer:
Acidic dye:
In these, acidic group like phenolic, sulphonic (S03H) are in the form of sodium salts. These colour animal fibre like wool, silk etc. Example : Orange – I and II.