Question 1.
Arrange the following compounds in increasing order of their boiling points :
CH3CHO, CH3CH2OH, CH3OCH3, CH3CH2CH3. (NCERT)
Answer:
CH3CH2CH3 < CH3O CH3 < CH3CHO < CH3CH2OH.
This order can be predicted on the basis of inter-molecular force operating between them, these are having comparable molecular mass. CH3CH2OH undergoes the strongest H – bonding. In CH3OCH3 and CH3CHO dipole – dipole attraction is more in CH3CHO, since CH3CHO is more polar than CH3OCH3 therefore its boiling point is more than CH3 – O – CH3. Propane being non – polar therefore, weak van der Waals’ forces exist between them.

Answer:
1. Ketones are less reactive than aldehydes because in ketones there are two alky group attached with carbonyl group, due to the positive inductive effect (+I) of both the alkyl group the positive charge on carbon atom decreases. Hence, the sensitivity of ketones to the nucleophilic reagents decreases. In aldehydes, they have only one alkyl group so they are more reactive than ketones.

2. – CHO group of benzaldehyde becomes stable due to resonance with benzene ring whereas resonance is not found in acetaldehyde. Benzaldehyde is aromatic and alde – hyde is aliphatic. 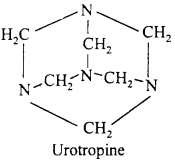 Ketones do not give this test.

Ketones do not give this test.

Question 8.
Among formaldehyde, acetaldehyde and acetone which is more reactive and why? Explain.
Answer:
Among HCHO, CH3CHO and CH3COCH3, HCHO is more reactive. This can be explained on the basis of:
1. Electron releasing effect:
Alkyl groups are electron releasing in nature due to which magnitude of positive charge on carbonyl carbon decreases and hence it becomes less susceptible to nucleophilic attack.

2. Steric effect:
The bulkier groups in ketones hinders approach of the nucleophile to the carbonyl carbon. This is known as steric effect. Thus, HCHO with negligible electron releasing effect as well as steric effect is more reactive.

2. When formic acid is heated to 160°C it dissociates into CO and H2O.

Question 11.
Although phenoxide ion has more number of resonating structures than carboxylate ion, carboxylic acid is a stronger acid than phenol. Why? (NCERT)
Answer:

Question 12.
Give chemical equation of the following :

Question 13.
Write down the difference between formic acid and acetic acid on the basis of following points : 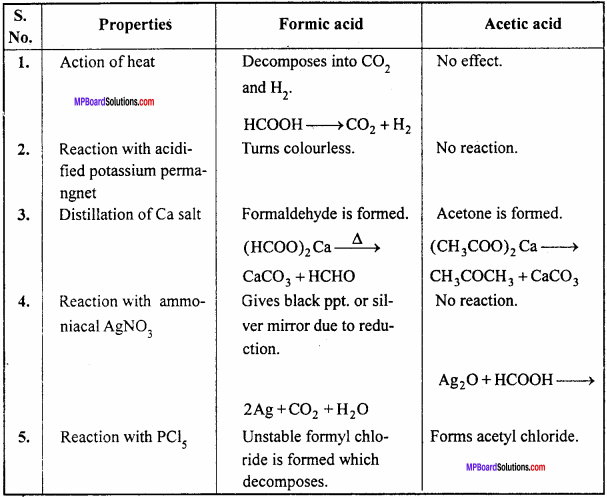 2. In presence of H2SO4 three molecules of acetone get condensed and form mesitylene. 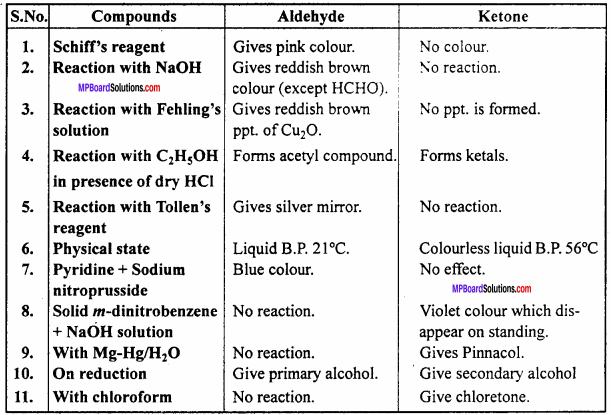 Answer:
1. Acetylation:
The introduction of an acetyl functional group into an organic compound is known as acetylation. It is usually carried out in the presence of a base such as pyridine, dimethylaniline, etc. This process involves the substitution of an acetyl group for an active hydrogen atom. Ecetyl chloride and acetic anhydride are commonly used as acety – lating agents.
For example, acetylation of ethanol produces ethyl acetate.
CH2CH2OH + CH3COCl → CH3COOC2H5 + HCl

4. Decarboxylation:
Decarboxylation refers to the reaction in which carboxylic acids lose carbon dioxide to form hydrocarbons when their sodium salts are heated with soda – lime.

Question 3.
Describe the laboratory method of preparation of acetone. Draw labelled diagram and write down chemical equations.
Answer:
In laboratory, acetone is prepared by dry distillation of anhydrous calcium acetate.

Method 30 – 40 gm of calcium acetate mixed with equal amount of sodium acetate is heated in a glass retort fitted with a condenser and receiver. Acetone is collected in the receiver. The acetone so obtained is not pure. To purify this, it is shaken with saturated solution of sodium bisulphite then crystals of acetone sodium bisulphite salt separate out. The crystal is washed and heated with sodium carbonate and then dried over anhydrous and CaCl2 then distilled at 56°C to get pure acetone. 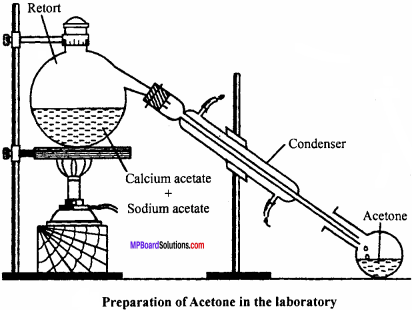 Question 4.
Write down the following reaction giving example and equation :

2. Tischenko reaction:
Two molecules of benzaldehyde is coupled together in presence of aluminium ethoxide or isopropoxide then benzylbenzoate (ester) is formed.

3. Gattermann – Koch synthesis:
Mixture of CO and HCl bubbled through a solution of aromatic hydrocarbon in ether solution in the presence of anhydrous AlCl3, then benzaldehyde is formed.

4. Rosenmund’s reaction:
Aldehydes are obtained by the reduction of acid chloride with hydrogen in boiling xylene in presence of a catalyst Pd suspended in BaSO4.

This reaction is called Rosenmund reaction.

Question 5.
Give quick vinegar method of preparation of acetic acid. Give its reaction with phosphorus pentaoxide and phosphorus pentachloride and write its two uses.
Answer:
In this process, a dilute aqueous solution of ethyl alcohol is oxidized in presence of enzyme Mycoderma aceti.

In this process, a wooden vat is fitted with two wooden plates having holes. Between these plates is filled by beech wood savings, moistened with old vinegar solution which is the chief source of Mycoderma aceti. A 10% aqueous solution of ethyl alcohol is dropped slowly from the top of the vat and air is passed at a controlled rate through the holes near the bottom of the vat. Ethyl alcohol is oxidized to acetic acid. This process is called quick vinegar process because vinegar is formed very quickly. 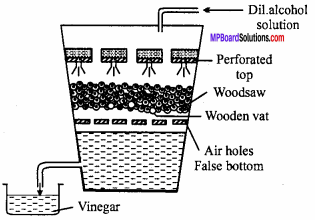 Question 6.
Write a brief note on : 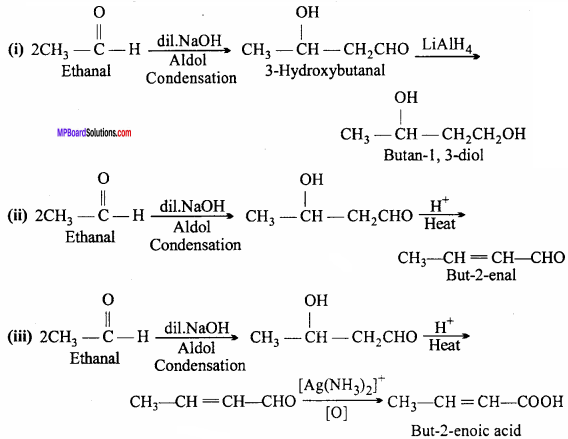 Question 8.
What happens when, (only equation):

2. Reaction of acetone with chloroform.

3. Reaction of benzaldehyde with aniline

4. Reaction of sodium salt of carboxylic acid with soda lime.

5. Reaction of benzene with CH3COCl.

Question 9.
How will you obtain the following from acetic acid (Give only equations):