Students get through the MP Board Class 11th Physics Important Questions Chapter 6 Work, Energy and Power which are most likely to be asked in the exam.

Question 1.
What is work? Is it scalar or vector quantity?
Answer:
Work is said to be done by a force when the force produces a displacement of the body on which it acts in any direction except perpendicular to the direction of force, i.e.,
W = Fs cosθ
It is a scalar quantity.

Question 4.
What is zero work? Give one example.
Answer:
If force applied on an object is perpendicular to its displacement then the work is zero.
∴ W = Fs cos90° = 0
Example: A coolie carrying suitcase on his head. The work done against gravity is zero.

Question 5.
When does the work done become maximum by a force?
Answer:
When the direction of force and displacement are same.

Question 8.
Write the statement of laws of conservation of energy.
Answer:
According to this law energy is neither created nor destroyed but transformed from one form to another.

Question 10.
What do you mean by variable force? Explain with example.
Answer:
When the magnitude and direction of a force are changing with time then such force is called variable force.
Example :
The gravitational force acting between two bodies depends upon the distance between the bodies, hence it is variable force.

Question 12.
If velocity of an object is doubled then what will be the increase in its kinetic energy?
Answer:
Kinetic energy will become four time as
K = \(\frac{1}{2}\) mν2

Question 14.
When a bullet strike a target and get stopped, then in which form its kinetic energy get changes?
Answer:
Kinetic energy of the bullet get changes into sound energy and heat energy.

Question 16.
Define watt.
Answer:
If the rate of work done is 1 joule per second, then the power is called watt.

Question 19.
Do the bodies touch each other compulsorily in collision? Give example.
Answer:
Not necessary. When alpha particles (2He4), which are positively charged particles are made to strike the nucleus, then they get deviated from their path without contact with each other.

(ii) Inelastic collision : The collisions in which the momentum of the system is conserved but not kinetic energy.
Example : Spreading of mud and stick to wall. A bullet embedded with a wooden block.

Question 25.
An object is displaced by applying force on it. When will be the work done maximum?
Answer:
When the displacement of an object is in direction of applied force, then work done is maximum.

Question 27.
A car is moving on the plane road with uniform velocity, does the car work, why?
Answer:
Yes, the car does work against frictional force.

Question 28.
What type of energy is stored in the spring of a watch?
Answer:
Elastic potential energy.

Question 36.
The quantity whose unit is kWh?
Answer:
Energy.

Question 39.
How much energy is produced by the absorption of an electron and a positron?
Answer:
1.02 MeV.

Question 40.
Which mechanical energy increases or decreases when a body is thrown vertically upwards?
Answer:
Potential energy and kinetic energy.

Question 42.
Write the forms of energy we get from the following :

Question 43.
Does a satellite do any work against gravitation while it revolve in its orbit? Why?
Answer:
No, because motion of a satellite is always perpendicular to the direction of gravitation. ‘
Since, W = F.d cosθ
and θ= 90°,
∴ cosθ= cos 90° = 0
∴ W = 0. 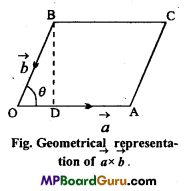 Work done by variable force :
Case 1. Only magnitude of force changes not direction :

Question 9.
Derive the expression for gravitational potential energy.
Answer:
Let, m = Mass of the body, g = Acceleration due to gravity on the surface of earth, h = Height through which the body is raised.
If we assume that height h is not too large and the value of g is practically constant, then the force applied just to overcome gravitational attraction is
F= mg …(1) 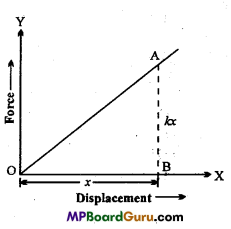 Question 11.
What is meant by collision ? Differentiate elastic and inelastic collision.
Answer:
Collision : The striking of one particle with another or an interaction between them is called collision.

Question 12.
If the momentum of a body is increased by four times, what will be in
crease in its kinetic energy?
Answer:
We know,

Question 13.
If the kinetic energy of a body is increased by four times, then what will be
increase in Its momentum?
Answer:
We know,

i.e., momentum will increase by 2 times.

Question 14.
The sign of work done by a force on a body is important to understand. State carefully if the following quantities are positive or negative:
(a) Work done by a man in lifting a bucket out of a well by means of a rope tied to the bucket
(b) Work done by gravitational force in the above case.
(c) Work done by friction on a body sliding down an inclined plane.
(d) Work done by an applied force on a body moving on a rough horizontal plane with uniform velocity.
(e) Work done by the resistive force of air on a vibrating pendulum in bringing it to rest.
Answer:
We know that the work done is given by W = F.s = Fs cos θ, where θ = smaller angle between force F and displacement s.
(a) To lift the bucket, force equal to the weight of the bucket has to be applied vertically upwards and the bucket moves along the same direction, thus 0 – 0, so W= FscosO = Fs i.e., positive.

Question 15.
What do you mean by positive, negative and zero work? Give one example of each.
Answer:
Positive work:
When the angle between force and displacement is zero or acute angle then the work is positive.
Examples :

Negative work :
When the angle between force and displacement is 180° or obtuse angle then the work done is negative.
∴ Fs cos 180° = -Fs
Examples :

Zero work:
If the force applied is perpendicular to its displacement, then the work is
zero.
W = Fs cosθ = Fs cos 90° = 0
Examples :

Question 17.
(a) An artificial satellite orbiting the earth in very thin atmosphere loses its energy gradually due to dissipation against atmospheric resistance, however small. Why then does its speed increase progressively as it comes closer and closer to the earth?

(b) In fig.-given below
(i) the man walks 2m carrying a mass of 15 kg on his hands. In fig.
(ii), he walks the same distance pulling the rope behind him. The rope goes over a pulley and a mass of 15 kg hangs at its other end. In which case is the work done greater? 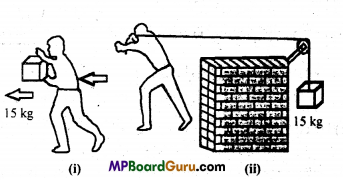 Answer:
(a) When an artificial satellite comes closer to earth, its gravitational P.E. decreases (as its height from the earth surface decreases). By law of conservation of energy, the sum of kinetic and potential energy should remain constant. To keep the total energy constant, kinetic energy should increase and so, velocity of satellite should increase. But, total energy of satellite continuously decreases at a very small rate due to atmospheric resistance.

As the K.E. is conserved :
K.E. before collision K.E. after collision 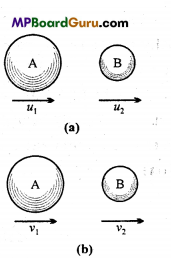 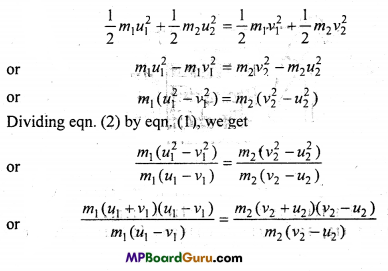 Question 2.
Prove that in inelastic collision in one dimension, always energy is lost. Derive the expression for the loss of energy.
Answer:
Consider a body A of mass m1, and another body B of mass m2 which are moving in the same direction with velocities u1 and u2 (u1 > u2). Both collide and stick together and move with common velocity ν.

Question 3.
A truck and a car are moving with same kinetic energy, which will stop first
(i) Both are stopped by applying same retardation force.
(ii) Brake is applied at same time on both.
Answer:
(i) K.E. = \(\frac{1}{2}\)mν2 =F. s
or
s = \(\frac{\text { Kinetic energy }}{\text { Retarding force }}\)
Since, kinetic energy of both are equal therefore distance travelled by both before stopping will also be equal i.e., both will get stopped at same time. 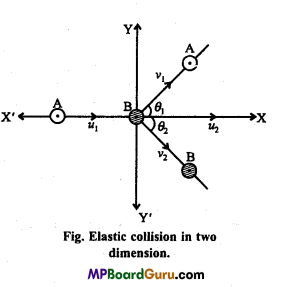 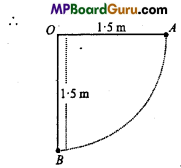 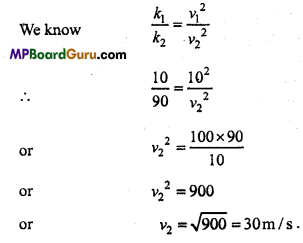 Question 11.
If the velocity of a particle is doubled, then its kinetic energy will be :
(a) Doubled
(b) Four times
(C) Equal
(d) One fourth.
Answer:
(b) Four times

11. The energy stored in a body due to mechanical work done on it is called …………………
Answer:
Mechanical energy

12. If velocity of an aeroplane is doubled, then its kinetic energy will become …………………..
Answer:
Four times

13. According to work energy theorem the work done on a body is equal to change in
its ………………….
Answer:
Kinetic energy

1. Potential energy of a bubble increases when it raise upward inside a water.
Answer:
False

2. If the momentum of a lighter body and heavier body are same, then kinetic energy of lighter body will be more.
Answer:
True

3. The work done in winding the spring of watch is stored in it in the form of potential energy.
Answer:
True

4. Work done by resisting force of air on an oscillating bob is negative.
Answer:
True

5. In nuclear reaction masses get converted into energy.
Answer:
True

6. Principle of hydrogen bomb is based on nuclear fission.
Answer:
False

8. The sum of kinetic energy and potential energy of all the particles of a body is called its internal energy.
Answer:
True

10. If the displacement of a body is zero on applying a force on it, then work done on it is positive.
Answer:
False

11. Work done to extend a spring is stored in it as elastic potential energy.
Answer:
True

12. A bullet on striking on a wooden plank get embedded in it the collision will be
elastic collision.
Answer:
False

14. In inelastic collision loss in kinetic energy is in the form of heat, light energy and sound.
Answer:
True

15. When a force of 1 newton is applied on a body so that it get displace by 1 metre in direction of force, then the work done will be 1 joule.
Answer:
True