Students get through the MP Board Class 11th Physics Important Questions Chapter 15 Waves which are most likely to be asked in the exam.

Question 1.
What do you mean by wave motion?
Answer:
It is a method of energy transformation in which the disturbance produced in the medium propagates without the flow of medium.

Question 2.
What is progressive wave. Write the formula for displacement of it?
Answer:
When disturbance is created continuously in a medium, then the particle of medium vibrates to and fro about their mean position without leaving their place. The distur¬bance move forward. The wave thus produced are called progressive wave.
Its displacement equation is :
\(y=a \sin \frac{2 \pi}{\lambda}(v t-x)\)

Question 3.
Write the principle of superposition of waves.
Answer:
When any number of waves meet simultaneously at a point in a medium, the net displacement at a given time is the algebraic sum of the displacement due to each wave at that time.

Question 4.
Write the name of the phenomenon obtained due to superposition of waves.
Answer:
Interference,

Question 5.
What are stationary waves?
Answer:
When two identical waves of equal frequency travel along the same line but in opposite direction superimpose, then the resultant wave thus formed is called stationary waves.

Question 7.
What are beats?
Answer:
When two waves with slight difference in frequencies travel in a medium simul¬taneously in the same direction then as a result of their superposition, the intensity of sound at any point increase and decreases alternately. This successive rise and fall in the intensity of sound is called beats.

Question 8.
What are the conditions of beats?
Answer:

Question 9.
If two tunning fork of frequency n1 and n2 are hammered together. Then how many beats will be obtained per second?
Answer:
Per second number of beat = n1~ n2.

Question 11.
On which factors the velocity of transverse wave produced in stretched string depends on?
Answer:

Question 13.
Explain beats period and frequency of beats.
Answer:
One rise and one fall of sound form one beat. The time interval between two consecutive intense sounds is called ‘beat period’.
The number of times the intensity of sound rises and falls in one second is called ‘beat frequency’.
Let the frequencies are υ1 and υ2
Beat frequency = \(v_{1}-v_{2}\)
and Beat period = \(\frac{1}{v_{1}-v_{2}}\)

Question 14.
What is Doppler’s effect?
Answer:
When, there is a relative motion between a sound source and a listener, then the change in the frequency of the source appears to the listener. This effect is called Doppler’s effect.

Question 15.
What are the limitations of Doppler’s effect?
Answer:
Limitations :

Question 17.
Explain one application of Doppler’s effect.
Answer:
To estimate the speeds of aeroplanes or submarine: When radio waves transmitted from the Radar, come back after reflection from aeroplane, then their wavelength is changed. If an aeroplane is approaching then its wavelength decreases or frequency increases and if the aeroplane receding from the station, the wavelength increases. Thus, by the change of wavelength or frequency, the speed of aeroplane can be calculated.

Question 18.
What do you mean by organ pipe?
Answer:
The pipe in which sound is produced by vibrating the molecules of air or gas-filled in it.

Question 20.
A sound-producing whistle is whirled fast in a horizontal circle. What change in the frequency will be observed by an observer standing (i) at the centre of the circle, (ii) outside of the circle?
Answer:

Question 21.
Why a flute has several holes in it?
Answer:
A flute is an open organ pipe, melodious sound of different frequencies can be produced by changing the length of air column by putting fingers on the holes.

Question 25.
Why are transverse waves not produced in gases?
Answer:
Because the gases are not rigid.

Question 26.
Which property is common to all types of mechanical waves?
Answer:
When the waves propagate through a medium, the particles of a medium do not advance along with waves.

Question 31.
A sitar, a tambour, and a harmonium all the three are made in unison at the same frequency, even then their voice can be recognised separately. Why is it so?
Answer:
Because the sounds of different qualities are produced by them.

Consider a harmonic wave propagat- g O ing in a medium along the positive direction of x-axis as shown in fig. The speed ofpropagation of wave is v. Its source is at origin ‘O’. As the source is executing
S.H.M., then the displacement of the particle situated at ‘O’ at any instant ‘f be \(y=a \sin \omega t\) ………(1)
Where, ‘a’ is amplitude of vibration and ‘ co ‘ is angular frequency. Now, \(\omega=2 \pi v=\frac{2 \pi}{T}\)

Sound travels through a gas in the form of compressions and rarefactions. Newton assumed that the changes in pressure and volume of a gas, when sound waves are propagated through it, are isothermal. The amount of heat produced during compression is lost to the surroundings and similarly, the amount of heat lost during rarefaction is gained from the surroundings, so as to keep the temperature constant. Using

Question 6.
What are beats? What are the necessary conditions to obtain beats?
Answer:
Beats: When two waves with slight difference in frequencies travel in a medium simultaneously in the same direction then as a result of their superposition, the intensity of sound at any point increase and decreases alternately. This successive rise and fall in the intensity of sound is called beats.

Question 8.
Derive the equation of stationary waves when it is reflected by rigid boundary.
Answer:
When a progressive wave is reflected by a rigid surface, then phase difference of n is produced.
Let the wave is travelling in +ve direction along the Y-axis,
Equation of wave will be
\(y_{1}=a \sin \frac{2 \pi}{\lambda}(v t-x)\) ……….. (1)
Where, a = Amplitude, y =Velocity and λ Wavelength. 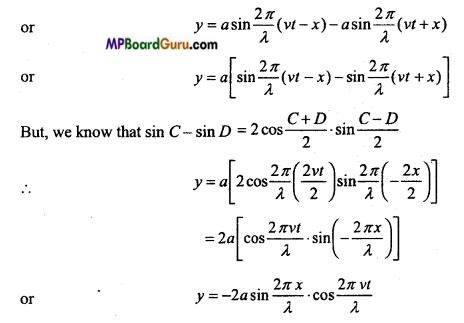 This is the required equation.

Question 10.
Explain beats period and frequency of beats.
Answer:
One rise and one fall of sound form one beat. The time interval between two consecutive intense sounds is called ‘beat period’.
The number of times the intensity of sound rises and falls in one second is called ‘beat frequency’.
Let the frequencies are υ1 and υ2
∴ Beat frequency = υ1 – υ2
and Beat period = \(\frac{1}{v_{1}-v_{2}}\).

(b) If y, R and M are constant, then,
\(v \propto \sqrt{T}\)
i.e., the velocity (speed) of sound is directly proportional to the square root of absolute temperature.
∴ With increase in temperature the speed of sound increases.

(c) From the formula \(v=\sqrt{\frac{\gamma P}{\rho}}\) , it is clear that
\(v \propto \frac{1}{\sqrt{\rho}}\)
The density of humid air is less than that of dry air therefore with increase in humidity the speed of sound increases.

In a stretched string even and odd both harmonics can be produced. In Fig. the first, second and third harmonics are shown. 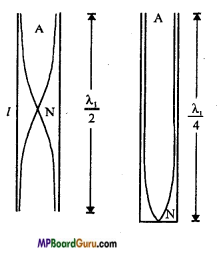 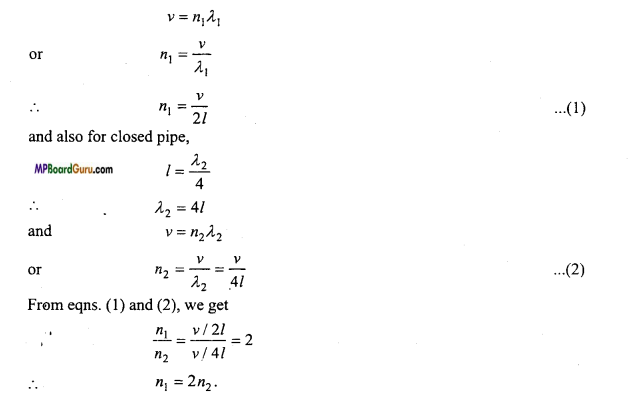 Question 1.
Prove that beats obtained by two sound sources per second is equal to the differences of frequencies of the sound source.
Answer:
When two sources of sound of nearly equal frequencies are sounded together, the amplitude of resultant wave due to superposition of waves at a point is in space. Some¬times the amplitude is maximum and sometimes, it is minimum. 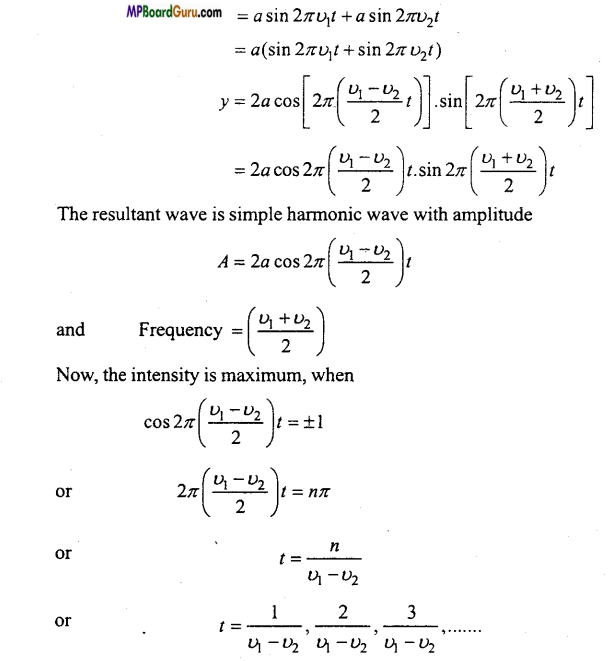 Question 2.
Prove that even and odd harmonics are produced by a stretched string.
Answer:
When a stretched string is plucked, then transverse waves are produced. The wave reflected from both- the ends and produced stationary waves.
∴The wave is reflected from the rigid end, hence the equation of stationazy wave will be
\(y=-2 a \sin \frac{2 \pi x}{\lambda} \cdot \cos \frac{2 \pi v t}{\lambda}\) ……………… (1) 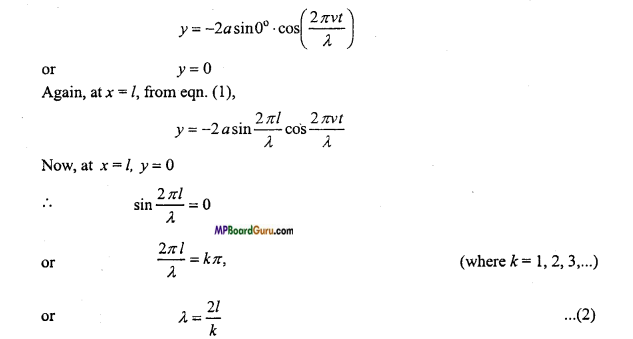 This frequency is called fundamental frequency or first harmonics. 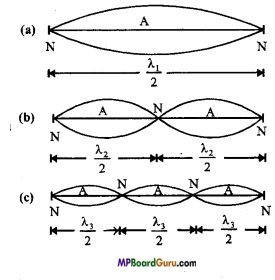 Question 3.
Prove that in a dosed organ pipe odd harmonics are produced.
Or
In a closed organ pipe, describe the mode of vibrations and prove that:
(i) The frequency of fundamental note is inversely proportional to the length of the organ pipe.
(ii) Only odd harmonics are produced.
Answer:
Organ pipe is a long cylindrical tube of uniform diameter and made of wood or metal. Sound is produced by this pipe as a result of vibrations in air column inside this. If one end of this tube is closed then it is called closed organ pipe and if both ends are open then it is called open organ pipe.

It is the tone of minimum frequency which produces in closed end organ pipe. It is called fundamental tone or first harmonic.
Also,
\(n_{1} \propto \frac{1}{L}\)
i.e., Fundamental frequency is inversely proportional to the length of the organ pipe. 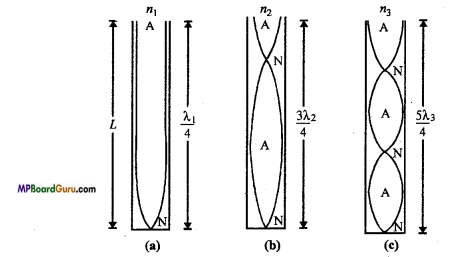 Question 4.
Prove that in open organ pipe both odd and even harmonics are produced. Ans. When a source of sound is kept at one end of an open organ pipe, the compressions and rarefactions are set up in the pipe. At the open ends antinodes are formed, hence rarefactions will be produced at the open ends and it returns in the form of compression. Thus, incident wave and reflected wave superimpose and stationary wave is formed.
Since, the reflection is, from free boundary,
\(y=2 a \cos \frac{2 \pi x}{\lambda} \cdot \sin \frac{2 \pi v t}{\lambda}\) 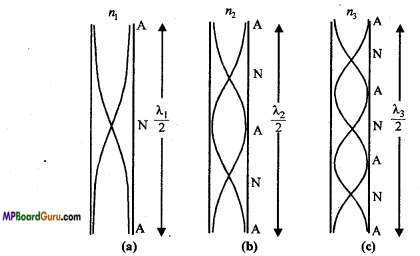 Third mode of vibration: If k = 3 and corresponding wavelength is λ3 and frequency n3, then

Now, suppose the sound-source S is moving with velocity us towards the observer. Then the source covers a distance us in one second towards the listener. Therefore, the v waves emitted by the source in 1 second will spread in a distance (υ-υs) only. Thus, the wavelength will be shortened. Let the changed wavelength be λ’.
Then, \(\lambda^{\prime}=\frac{u-u_{s}}{v}\) ………….(1)

If the source S is going away from the listener O, then the wavelength will be in-creased and its value will be given by
\(v^{\prime}=\left(\frac{u}{u+u_{s}}\right) v\)

Question 6.
Derive the expression for the apparent frequency, when the listener is moving toward stationary source.
Answer:
Suppose, S is a sound source of frequency u and u is the velocity of sound. Again suppose that O is a listener who is coming towards the source with the velocity υ0. If the listener were stationary then he would have received u waves in 1 second. Therefore, the real wavelength is given by
λ = \(\frac{u}{v}\)

But, the listener himself is moving towards the source with a velocity υ0 that is, he covers a distance υ0 toward the source in 1 second. Hence the listener, in addition to υ waves, also receives υ0/ λ waves contained in the distance υ0. Therefore, the total waves received by the listener in 1 second i.e., the apparent frequency of the sound is 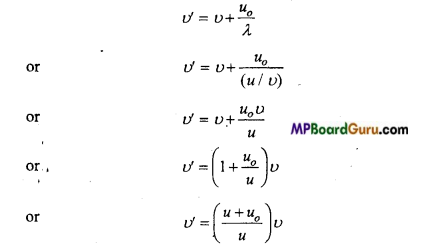 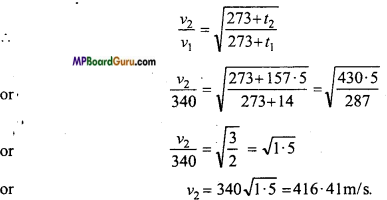 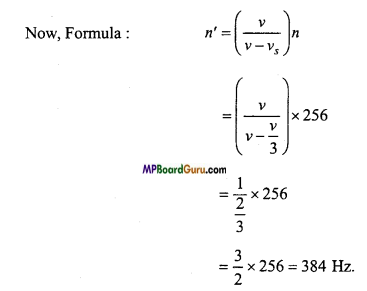 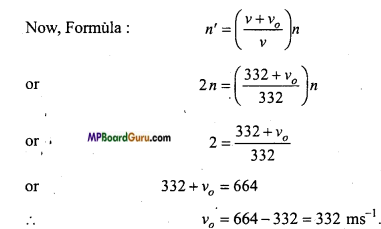 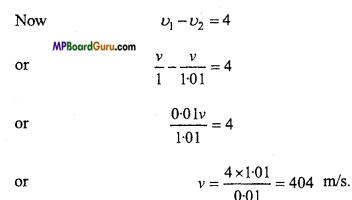 (b) Transmitted sound propagate in water

Question 6.
As a utensil is filled with water, its frequency :
(a) Increases
(b) Decreases
(c) Remains same
(d) None of the above.
Answer:
(a) Increases

Question 7.
Waves transport from one end to another :
(a) Energy
(b) Amplitude
(c) Wavelength
(d) Matter.
Answer:
(a) Energy

2. …………….. waves require a physical medium for their propagation.
Answer:
Mechanical

3. …………….. waves do not require any medium for their propagation.
Answer:
Electromagnetic

4. In transverse waves, the distance between any two consecutive crest or trough is called …………….. .
Answer:
Wavelength

5. After one …………….. the phase of a particle is same as in the initial moment.
Answer:
Time period

2. Propagation of mechanical wave in medium is possible due to elasticity and inertia.
Answer:
True

3. Propagation of wave in air is a isothermal changes.
Answer:
False

4. If the velocity of listener is more than velocity of sound then Doppler’s effect will not implement.
Answer:
True

6. A person is standing at a point and a car is coming toward him blowing horn. The frequency of horn will be less than original frequency.
Answer:
False

8. Beats is produced when frequency of two sound source are same.
Answer:
True

10. Expansion of universe is observed by Doppler’s effect. ‘
Answer:
True