Question 1.
Define simple harmonic motion with example.
Answer:
When a body moves to and fro about a point in a straight line such that its acceleration is always directly proportional to the displacement and directed towards the mean position, then its motion is called simple harmonic motion.
Example: Motion of a body suspended by a spring, motion of simple pendulum.

Question 3.
For what type of motion of a body acceleration is directly proportional to displacement?
Answer:
It is simple harmonic motion.

Question 7.
Define simple pendulum.
Answer:
When a heavy point mass is suspended by a weightless, inextensible and perfectly flexible string by a rigid support, then it is called simple pendulum.

Question 13.
Define time-period, frequency and amplitude.
Answer:
Time period: The time taken by an oscillating body to complete one oscillation is called time-period.
Frequency: The number of vibrations or oscillations in one second is called frequency.
Amplitude: The maximum displacement of a particle about its mean position is called amplitude. It is denoted by a or A.

Question 14.
What is the relation between S.H.M. and Circular motion?
Answer:
When any particle is performing uniform motion on the circumference of a circle, then the perpendicular dropped on the diameter of the circle from any point of rotation execute S.H.M. along the diameter of circle.

Question 16.
Write the formula for the time-period of a body suspended by a spring.
Answer:
Where, T= Time-period, m = Mass suspended and k = Force constant.

Question 22.
A boy is swinging, sitting on a swing. If another boy sits beside him, what will happen to its time-period?
Answer:
The time period is independent of mass, hence there will be no effect.

Question 23.
A boy is swinging, standing on a swing. If he sits on it, what happen to the time-period?
Answer:
When the boy will sit on the swing, his C.G. point will shift downwards. Hence, the effective length will increase therefore the time-period will also increase.

Question 25.
The pendulum clock becomes fast when it is taken to pole from equator. Why?
Answer:
We have, T = \(2 \pi \sqrt{\frac{l}{g}}\)
If l is constant ,then T ∝ \(\frac{1}{\sqrt{g}}\)
Hence, time-period is inversely proportional to the square root of acceleration due to gravity. At poles the value of g is greatest, hence the time-period will decrease at poles, hence the clock will be fast.

Question 30.
Define resonance.
Answer:
When a body vibrates under the influence of a periodic force and its frequency becomes equal to that of periodic force then the amplitude of the body increases. This phenomenon is known as resonance.

Question 35.
What will be the time-period of effective length infinity?
Answer:
84.6 minute.

Question 1.
The bob of simple pendulum is a ball filled with water, if a small hole is made at the bottom of the ball, how will its time period change as water is drains out of it?
Answer:
When the ball is completely filled with water, its centre of gravity be at its geometric centre. So, it will oscillate with definite time period. But as the water drains out of it through the hole, the centre of gravity is displaced gradually downward. Hence the effective length also increases gradually. Therefore the time period of the pendulum also increases gradually. But when whole of the water is removed then its centre of gravity again shifted to its geometric centre and its time-period become same as was in initial position.

Question 2.
What is simple harmonic motion. Write its four characteristics.
Answer:
When a body moves to and fro about a point in a straight line such that its acceleration is always directly proportional to the displacement and directed towards the mean position, then its motion is called simple harmonic motion.
Example: Motion of a body suspended by a spring, motion of simple pendulum.
Characteristics of S.H.M.:

Question 5.
What is meant by simple pendulum? When the bob is displaced from its mean position it starts oscillations. Why?
Answer:
If a heavy point mass be suspended by a weightless, perfectly flexible and inextensible string from a rigid support and an arrangement is made for its frictionless oscillations, then this arrangement is called simple pendulum. As shown in fig. when bob is displaced from its mean position A to a position B, then the bob raised up to height ‘h\ so that its potential energy increases.
Now, if the bob is released, then its centre of gravity falls down to obtain the stable equilibrium and when it reaches to the mean position its potential energy is converted into kinetic energy. At points, it will not stay, but due to inertia moves forward and hence the bob starts to execute simple harmonic motion to and fro about its mean position. 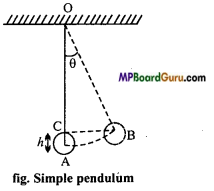 (iii) Law of mass: The time period of simple pendulum does not depend upon the mass of bob or that of thread.
Hence, either bob is heavy or lighter, if the value of 7’ and ‘g’ are constant, then there is no effect in its time-period. .

Question 8.
Establish the relation between time-period and frequency.
Answer:
Let the time-period of a particle is T and its frequency is υ.
∴ The particle complete one vibration in T sec.
Hence, in 1 sec the number of vibration, υ = \(\frac{1}{T}\)
or
υT = 1.

Question 9.
Derive an expression for the displacement of a particle executing S.H.M.
Or
Find an expression for the displacement of S.H.M.
Answer:
Let XYX’Y’ is a circle whose centre is O and radius a. A particle is moving with uniform angular speed ω on the circle.
Let at time t = 0, the particle is at X and in time t, it is at P. A perpendicular PN is drawn on YOY’ from P and N is foot of the perpendicular. 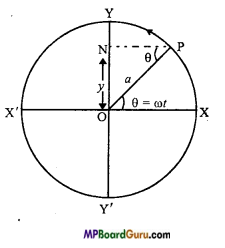 Question 12.
Derive the expression for the time>period and frequency of a particle ex-ecuting S.H.M.
Answer:
Now, we have the magnitude of acceleration is given by 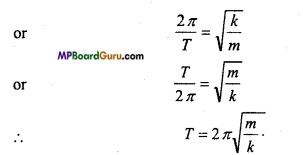 P.E. of the particle: Now, the acceleration of a particle executing S.H.M. is given by α = -ω2y
Also, by Newton’s second law of motion,
Force = Mass x Acceleration
∴ F = mα
or
F = -mω2y
Now initially the displacement was zero and force was zero. The force was gradually increases and hence the displacement also increases to y. 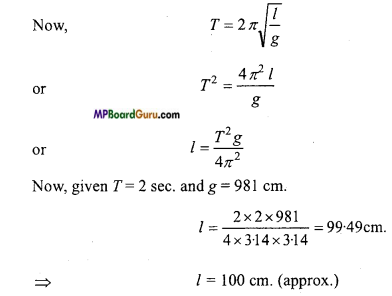 (ii) The weight of the bob, mg, vertically downward. The weight mg can be resolved into two components :
(a) mg cos θ, in the direction SP downward along the thread.
(b) mg sin θ, perpendicular to the thread SP.
The component mg cos θ balances the tension Tin the thread. The component mg sin θ tends to bring the bob back to its mean position. This is known as restorting force on the bob. Thus, the restorting force acting on the bob is given as F= -mg sinθ 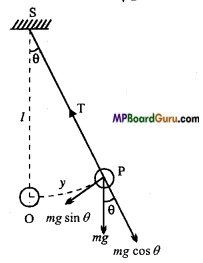 At a given place g is constant and for a given pendulum lis constant.
Therefore,
α ∞ -y …….. (4)
Thus, the acceleration of the bob is directly proportional to its displacement. Hence, for small amplitude the motion of a simple pendulum is simple harmonic motion. Its periodic time is 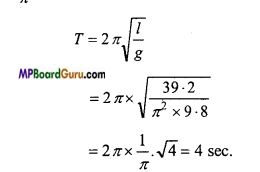 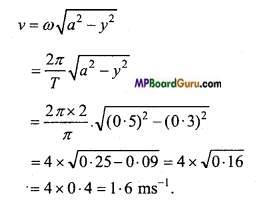 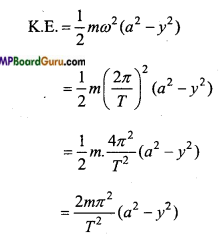 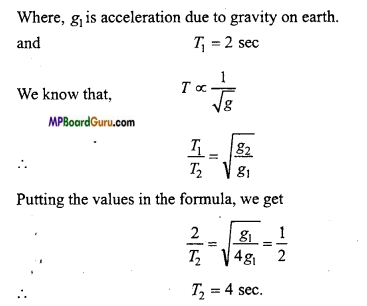 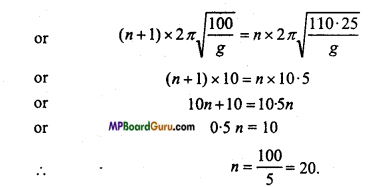 Question 14.
A spring having spring constant 1200 Nm’ is mounted on a horizontal table as shown in fig. A mass of 3 kg is attached to the free end of the spring. The mass is then pulled side ways to a distance of 2.0 cm and released. (NCERT)
Determine
(j) The frequency of oscillations.
(ii) Maximum acceleration of the mass and
(iii) The maximum speed of the mass.

Question 8.
Graph between ‘f and ‘F obtained as :
(a) Hyperbola
(b) Parabola
(c) Straight line
(d) None of these.
Answer:
(b) Parabola

2. In simple harmonic motion its total energy is ………. .
Answer:
Constant

4. When a body oscillates on both sides of its mean position in a straight line, then this bind of motion is called ………… .
Answer:
Simple harmonic motion

5. The maximum displacement of a body in oscillatory motion is called ………… .
Answer:
Amplitude

6. In the presence of damping forces, the amplitude of oscillations of a body ………… .
Answer:
Decreases

7. The time-period of second pendulum is ………… second.
Answer:
Two

8. The periodic time of simple pendulum does not depends upon
Answer:
Mass.

1. Every S.H.M. is a periodic motion.
Answer:
True

3. In S.H.M. total energy is directly proportional to square of amplitude.
Answer:
True

5. Time-period of simple pendulum is directly proportion to square root of its length.
Answer:
True

6. Time-period of simple pendulum is inversely proportional to the square root of acceleration due to gravity.
Answer:
True

7. Time-period of simple pendulum depends on mass, material and size of the pendulum.
Answer:
False

8. In S.H.M., velocity is maximum when acceleration is minimum.
Answer:
True

9. The motion of moon around the earth is S.H.M.
Answer:
False

11. Time-period of a simple pendulum cannot be one day.
Answer:
True