Students get through the MP Board Class 11th Chemistry Important Questions Chapter 5 States of Matter which are most likely to be asked in the exam.

Question 1.
What is meant by pressure of a gas?
Answer:
Pressure is produced by the collisions of gas molecules on the walls of the container. Force acting per unit area is called pressure.
Pressure =\(\frac{\text { Force }}{\text { Area }}\) = P = \(\frac{\mathrm{F}}{\mathrm{A}}\)
S.l. unit of pressure is Newton/meter2. It is also known as pascal.

Question 3.
According to one of the postulate of kinetic molecular theory. “There is no intermolecular υ, attractive force in between the gas molecules”.
Up to what extent is this statement correct? Is liquefaction of Ideal gas possible? Explain.
Answer:
This statement is correct only for ideal gas. It is not possible to liquefy an ideal gas because there is no intermolecular force of attraction between the molecules of ideal gas.

Question 5.
How does the volume of balloons released for the study the weather changes?
Answer:
As the balloon rises up, atmospheric pressure decreases. Due to decrease in pressure, pressure inside the balloon increases and its volume increases.

Question 6.
In winter season a layer of ice is formed on the lake but fish and other organisms present inside remain alive. Why?
Answer:
Maximum density of water is at 4°C temperature but at temperature below 4°C density is less. When the temperature of the lake falls then the water of the surface above becomes more dense and goes down. This order goes on till the temperature does not reach 4°C.

If the tempefature of the surface is less than 4°C, then water remains on the surface above and slowly gets converted to ice where as the water below due to high density remains below and stays in liquid state only. Therefore, organism and fish remain alive in it.

Question 8.
What is meant by completely elastic collision?
Answer:
Gas molecules move in zig-zag motion in all directions. During this motion, these molecules collide with each other and with the wall of the container. During these collisions, there is a change only in their direction but their kinetic energy remain unchanged. Therefore, these collisions are said to be completely elastic.

Question 13.
In automobile vehicles, less air is filled in summer than in winter. Why?
Answer:
When automobile vehicles are in motion then due to friction between the tyre and road, temperature of tyre increases, due to which volume of air inside the tyre increase, as a result of which pressure applied on the tyre also increases. In summer temperature is high which leads to increase in pressure. As a result there is more possibility of the tyre to burst.

Question 17.
What is the reason that soda water bottles are stored in cold water in summer?
Answer:
In soda water bottles CO2 gas is soluble at high pressure. With the increase in temperature solubility decrease due to which high pressure is produced at the walls of the bottle and there are chances of breaking of bottles. Thus, to prevent the bottles from breaking. It is stored in water in hot summer days.

If NH3 bottle is opened without cooling, then NH3 easily changes to vapour and moves out. NH3 is a harmful gas, its harmful effect can be produced on the person opening it. To prevent from this effect NH3 bottle is cooled.

Question 23.
What is the change in melting point of ice with the increase of pressure?
Answer:
Increase in pressure leads to extreme increase in kinetic energy of molecules, as a result of which at low temperature due to kinetic energy of molecules they move independently. Thus on increasing the pressure, ice melts into a liquid at a temperature below its melting point.

Question 25.
Define viscosity and write the effect of temperature on viscosity.
Answer:
Resistance in flow of any liquid is called viscosity. Such resistance is produced due to internal friction of different layers of liquid.

When temperature is increased, the cohesive force, which opposes liquid flow, decreases and molecular velocity increases. Due to this, viscosity decreases.

Question 27.
At the same temperature if ether and water are poured in different hands, then ether feels more cold. Why? Answer:
In ether, intermolecular forces between its molecules in less as compared to water. Therefore, ether evaporates faster than water and it absorbs the energy required for evaporation from hand, therefore, ether feels cold.

Question 28.
What is surface tension? Write its S.I. unit.
Answer:
It is an important property of a liquid, which is related with interatomic attraction force. Due to compactness, the surface of liquid behaves as a stretched membrane. This effect is called surface tension. “Surface tension is a measure of work which is necessary to increase the unit cross-section of liquid.” Its S.I. unit is Joule/metre2 or Newton metre.

Question 30.
Expansion in gases is unlimited. Why?
Answer:
In gases, intermolecular attractive force is negligible, therefore gas molecules moves independently in indefinite order. It does not have a definite shape or volume due to which its molecules expands and acquires the shape and volume of the container.

(ii) van der Waals’ constant is a measure of magnitude of intermolecular force. In a molecular, with the increase in size of electron cloud, magnitude of intermolecular force of attraction also increases. Thus, for the following gases in order of decreasing value of a is.
CH4 > O2 > H2
Higher the size of electron cloud, higher will be the polarising capacity of the molecules as a result of which london force will be high. 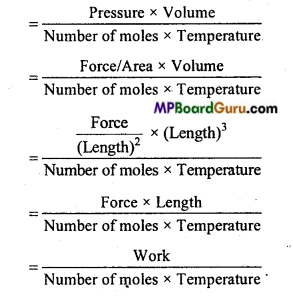 Question 7.
On the basis of Charles law, justify the concept of absolute zero.
Answer:
Charles law: According to this law, “At constant pressure, volume of a definite amount of a gas increases or decreases by\(\frac{1}{273}\) of its volume at 0°C with every 1° rise or fall
in temperature”.

Question 8.
What is Gay Lussac law?
Answer:
Gay Lussac law: According to this law “At constant volume, pressure of a definite amount of gas is directly proportional to absolute temperature.”

Question 16.
Derive gas equation by the help of kinetic equation.
Answer:
According to the postulate of kinetic theory, average kinetic energy of molecules is directly proportional to absolute temperature.

This law states, “The total pressure of mixture of gases (or vapour) which does not react chemically is equal to the sum of the partial pressure of the component gases.”
Mathematically, it is expressed as,
P = P1+P2+P3+………………………+Pn.

Question 20.
Write the applications of Graham’s law of diffusion.
Answer:

Question 21.
On heating fine corners of glass in a flame to its melting point, why does it becomes smooth ? Write the name of the property responsible for it.
Answer:
Glass of fine corners are made smooth by heating in a flame because on heating glass melts and corner of the liquid tries to achieve a round shape, whose surface tension is minimum. This is known as of glass.

Question 22.
Discuss the step of‘Laminar flow’. Is velocity of every particle of laminar flow same? Discuss your answer.
Answer:
When flow of liquid is on fixed surface then the larger of liquid which is in contact with the surface become stationary as the distance of the upper layers from the fixed surface increases, velocity of layer goes on increasing.

This type of flow, in which velocity of one layer increases by the other layer is called laminar flow. In laminar flow, speed of particles in all the layers is not same because a layer applies friction or resistance flow on the layer below:

Question 28.
What is Ideal gas? Write its characteristics.
Answer:
Ideal gas: Gas which obey gas laws and gas equation at all pressure and temperature is called Ideal gas.

Question 29.
What is Real gas? What are its characteristics?
Answer:
Gas which does not obey Boyle’s law, Charles law and ideal gas equation strictly is called Real gas.

Alternatively if volume is increased, number of molecules present in unit area will decrease, due to which number of collisions on unit area in unit time will decrease by which there will be decrease in pressure. Thus, it is justified that at constant temperature volume of definite amount of gas is inversely proportional to pressure.

If pressure is to be kept constant, then it is necessary that possibility of collisions between the molecules should not increase. It may be possible, only when distance between the gas molecules may increase thus volume may increase. Thus, it is clear that at constant pressure volume of a definite amount of gas is directly proportional to absolute temperature.

Question 2.
Derive an expression for pressure of gas on the basis of kinetic gas theory. Or, Prove the kinetic gas equation PV = \(\frac{1}{3} \)Mv2.
Answer:
Suppose in a cubic vessel some gas is present for which :
Length of core of cube = l cm,
Number of moles of gas = n,
Mass of one molecule of gas = m,
Root Mean Square velocity = v. 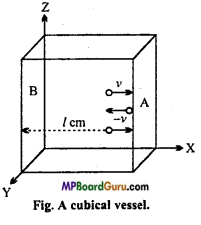 At high pressure and low temperature when volume of gas becomes very less, gas molecules come very close to each other and attractive force between molecules is produced which cannot be supposed negligible.

Volume correction : Since at normal temperature and low pressure the volume of a molecule cannot be considered to be negligible as compared to the total volume of the gas and this effective volume is represented by constant b. Thus in gas equation in place of volume V, (V – b) must be used, which is available for independent motion of molecules.

Question 4.
What do you understand by viscosity? Which factors affect viscosity?
Answer:
Every liquid possess a tendency to flow because intermolecular attractive force in liquids is less and they are incompressible. Some liquids like honey, castor oil etc. flow rapidly. Difference in rate of flow is due to viscosity. Viscosity is internal resistance to flow in liquids, which arises due to internal friction between the layers of liquids.

Liquid is made up of various layers. When a liquid flows on any surface then these layers flow with various velocities. Molecules present in various layers of liquid attract each other and this intermolecular attractive force produce resistance.

Question 5.
What is Surface tension? Discuss the factors affecting it.
Answer:
It is an important property of a liquid, which is related with interatomic attraction force. The molecules present inside the liquid is attracted equally by molecules present in all direction. But molecule present on the surface of liquid is attracted by molecules at bottom and insides, as a result the molecules at surface are pulled downward and nature of surface is to lessen the area.

Due to compactness, the surface of liquid behaves as a stretched membrane. This effect is called Surface tension.

“Surface tension is a measure of work, which is necessary to increase the unit cross-section of liquid.”
Its S.I. unit is Joule / metre2 or Newton metre. 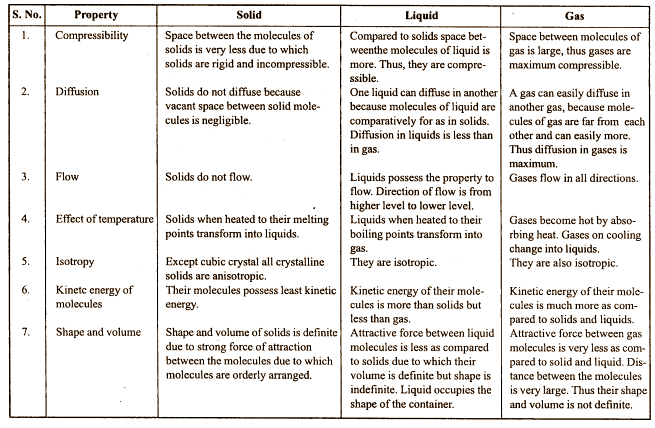 Question 11.
What will be the pressure exerted by a mixture of 3.2g of methane and 4.4g of carbondioxide contained in a 9 dm3 flask at 27° C ? (NCERT)
Solution:
Number of moles in CH4 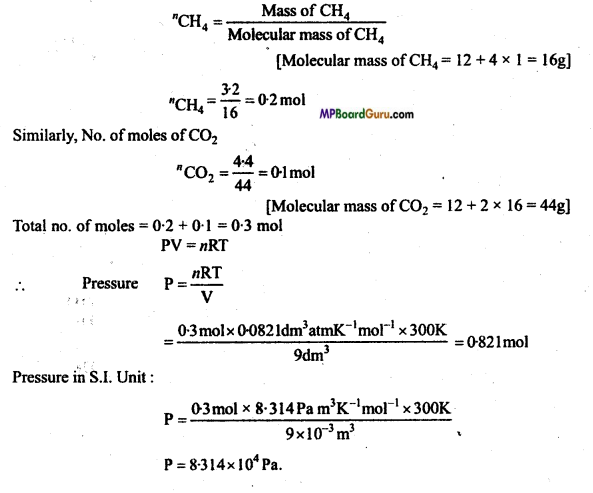 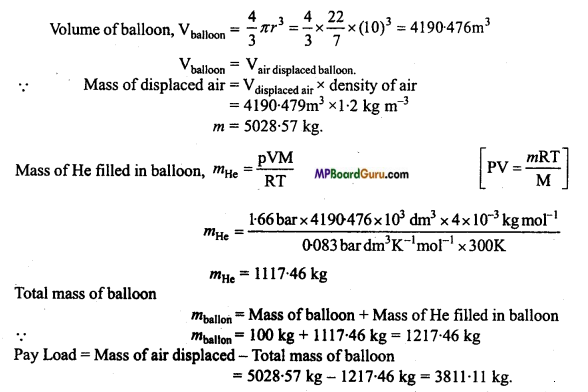 Question 2.
Who established the relationship between density and rate of diffusion of a gas:
(a) Boyle
(b) Charles
(c) Graham
(d) Avogadro.
Answer:
(c) Graham

1. According to kinetic theory, the average kinetic energy of a gas is directly proportional to its ……………… temperature.
Answer:
Absolute

4. Answer in one word/sentence:

1. The resistance produced in the flow of a liquid is called.
Answer:
Viscosity

4. Scientist who proposed the law of partial pressure is.
Answer:
Dalton

5. Name the scientist who developed relation between density and rate of diffusion of gas.
Answer:
Graham