Students get through the MP Board Class 11th Biology Important Questions Chapter 4 Animal Kingdom which are most likely to be asked in the exam.

Question 6.
What are glass sponges?
Answer:
Skeleton of some sponges are transparent and their spicules or spines are silicious thus they are called as glass sponges.

Question 3.
What is the importance of presence of air bladder in fishes?
Answer:
Air bladder present in the fishes help for buoyancy, due to which they may swim easily, even if it reaches to the bottom it can come up easily, e.g., Exocoetus, Rohu fishes.

Question 6.
Write down the name of the animals which are related with the given organs :
1. Compound eye,
2. Carapace,
3. Medusa,
4. Flame cells,
5. Placoid scales,
6. Blabber,
7. Parapodia.
Answer:
Organs – Animals related to it

4. Bony fishes and Cartilage fishes :
Fishes having bones are called Bony fishes and they are fresh water as well as marine whereas Cartilaginous fishes are having cartilage they are all marine.

Question 8.
What is False fish? Explain it with examples.
Answer:
Those animals which live in water and have the capacity to swim in water like fishes. But they do not come under class Pisces. So they are called false fish.
Example :

Question 11.
What do you understand by symmetry of animals? How many kinds of symmetry is found in animals ? Write at least any one character and give one example from each type of symmetry.
Answer:
Symmetry :
The arrangement of various parts of the body of organisms is called as symmetry .There are three types of symmetry found in animals :

Question 14.
Describe the important adaptations of the Arthropods.
Answer:
Phylum Arthropoda is the largest phylum of the animal kingdom. The following adaptive characters are found in the arthropods :

(B)
Name of related animal and their phylum :
Animal – Phylum

Question 17.
Name the class which is represented by bats. Give three reasons.
Answer:
Bats are placed under the class Mammalia due to the following features :

Question 21.
What do you understand by Bilateral Symmetry? Explain it with example.
Answer:
Bilateral symmetry : If the body can be divided into two equal halves by one plane only it is called bilateral symmetry. Here the body organs are paired and occur on the two sides of a central axis, e.g., all vertebrates like fishes, human beings, birds, etc.

Such animals possess a front or anterior end and a rear or posterior end. They also possess an upper back or dorsal side and a lower belly or ventral side. On the basis of dorsal and ventral sides the right and left side® ‘if the body are called lateral sides. Man, Snake, Earthworm are the examples of Bilateral symmetry.

Question 24.
Write down the name of phylum and class of the following animals :
1. Tapeworm,
2. Nereis,
3. Cockroach,
4. Starfish.
Answer: 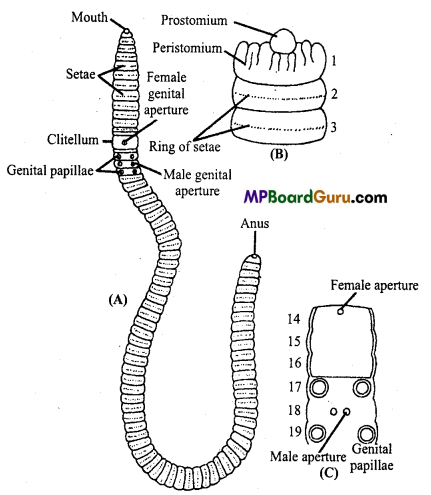 Question 31.
Give one example of each of the following :
1. Animal with largest life span,
2. Largest lizard,
3. Largest snake,
4. Largest animal of the world.
Answer:
Animal – Examples

Question 36.
Write short notes on :
1. Haemocoel,
2. Porifera,
3. Insecta,
4. Cyclostomata,
5. Protochordata,
6. Nematoda,
7. Metamerism.
Answer:
1. Haemocoel: Coelom is a cavity which lies between body wall and digestive tract. It is filled with a fluid called coelomic fluid, but in phylum Arthropoda, in place of coelomic fluid, blood is filled, therefore it is called Haemocoel. It works as transporter.

3. Insecta :
It is the class of Phylum Arthropoda, which has following points :

4. Cyclostomata :
It is a part of Phylum chordata, which have following characters :

5. Protochordata :
It is a part of chordata, having following characters :

7. Metamerism :
The body of many animals is formed of numerous segments which show serial repetition of parts. This kind of segmentation is called metameric segmentation and the phenomenon is known as metamerism.

Question 40.
If a specimen is provided to you, what step will you take to classify the organisms? (NCERT)
Answer:
Inspite of different external features and shapes, some basic similarities are found in cellular organization, body symmetry, type of coelome, digestive system, circulatory system and reproductive system of the organisms.
To classify, all these features can be considered.

Question 41.
How structure of coelome and coelomate is helpful in the classification of living organisms? (NCERT)
Answer:
Coelome is defined as a cavity lined by mesoderm, it lies between the body wall and the digestive tract in which various internal organs are found suspended. Presence or absence and nature of coelome is the main basis of classification. Organism with coelome is called as Coelomate. e.g., Annelids, Echinodermates and Chordates etc.

The animals without coelome are called as Acoelomate. eg., Sponges, coelentrates and flatworms. In some other organisms mesoderm is found in the form of small packs scattered in between outer ectoderm and inner endoderm. Such organisms are called are Pseudocoelomate. eg., Roundworms such as Ascaris.

(B) Parazoa Branch :
It has cellular organization, clear mouth, anus absent. It has only one phylum.
2. Phylum Parazoa :

Phylum Chordata is further classified into 7 classes; they are :
1. Class Cyclostomata :

Question 7.
If there is lack of knowledge of basic features then will you face problem to classify animals? (NCERT)
Answer:
Following problems may be faced while classifying the animals :

Question 8.
Classify Mammalia into subclasses with characters and examples.
Answer:
There are three subclasses : Prototheria, Metatheria and Eutheria.
(A) Prototheria :

Question 9.
Write short note on following :
(1) Class-Aves,
(2) Class-Reptilia,
(3) Class-Pisces.
Answer:
(1) Class-Aves:
It is an important class of phylum-Chordata. It includes organisms which can fly and has notochord, nerve cord and gill slits in some stages of its life cycle.
Characteristic features :

Question 6.
Animals found in the bottom of sea are called as :
(a) Lentic
(b) Lotic
(c) Benthic
(d) Pelagic.
Answer:
(c) Benthic

Question 16.
Which of the following is an oviparous mammal:
(a) Whale
(b) Platypus
(e) Rabbit
(d) Snake.
Answer:
(b) Platypus

Question 20.
Light blue colour of the blood of arthropods is due to:
(a) Haemoglobin
(b) Haemocyanin
(c) Hirudin
(d) None of these.
Answer:
(b) Haemocyanin

6. Jointed appendages is the important characteristic of ……………… phylum.
Answer:
Arthropoda

5. Most of the flat worms are anaerobes, this is ………………… adaptation.
Answer:
Parasitic

9. Malpighian tubules are the ……………….. organs of insect.
Answer:
Excretory

10. Presence of hairs on the body surface is the characteristic features of class …………………..
Answer:
Mammalia

1. All major groups of animals have evolved in the sea.
Answer:
True

1. The excretory organs in earthworm are.
Answer:
Nephridia

2. The process of transformation of a larva into an adult is called.
Answer:
Metamorphosis

3. The body fat of whale is called.
Answer:
Blubber

4. Malpighian tubules are the organs in insects.
Answer:
Excretory

5. The largest class of molluscs are.
Answer:
Gastropods

6. Write name of one bisexual animal of the phylum annelida.
Answer:
Hirudinaria (the cattle Leech)