Students get through the MP Board Class 11th Biology Important Questions Chapter 20 Locomotion and Movement which are most likely to be asked in the exam.

Question 1.
What is arthritis?
Answer:
Arthritis is a disease characterized by the inflammation of the joints. In this disease, the synovial membrane secretes extra fluid which causes swelling and pain in the joints. A hard tissue deposits over the articular cartilages. As a result the joints become stiff.

Question 2.
How movement takes place in skeleton by muscles?
Answer:
The skeleton of our body is connected with each other by voluntary muscles. The fibres that connect the bones with any muscle are known as tendon, whereas the fibres that connect bones to bones are known as ligaments. Muscle cells are made up of muscle fibres having the property of contraction and expansion hence muscle cells also possessing these characteristics. The contraction and expansion of these muscles resulting in the movement of skeleton.

Question 4.
From where energy is obtained for contraction of muscles?
Answer:
The energy for the contraction of muscle fibres is obtained from a chemical substance known as adenosine triphosphate (ATP) which is found in mitochondria. This sub¬stance is the source of energy required for the metabolic activities of cells. The energy obtained by the oxidation of glucose which is stored in ATP. Little glucose is present in muscle fibres but myosin is rich in ATP. When the muscle is excited, ATP itself changes into adenosine diphosphate (ADP), thereby releasing energy.
ATP → ADP + P04 + Energy
ADP is again converted into ATP by the energy obtained from the creatine phosphate. CP + ADP → ATP + C. Creatine is resynthesized into creatine phosphate by the energy ob¬tained from glucose of muscle glycogen.

The number of mitochondria is also few. Hence oxygen supply becomes irregular and lactic acid is formed in these muscle fibres due to anaerobic respiration. Thus, these muscles become fatigue and they do not functioning up to a longer period of time.

Question 7.
What is meant by twitch muscle and tetanus?
Answer:
Twitch muscle: When a muscle receive only one stimulus then it contracts only one time. This one time contraction of muscle fibre is called as muscle twitch.
Tetanus : It is the permanent contraction condition of the muscle which occurs due to continuous conduction of impulse. This may lead to death of the person.

Question 8.
What is oxygen debt?
Answer:
Oxygen debt: After heavy work or exercise muscle do not get oxygen to fulfil their energy requirement. Thus, they produces ATP by anaerobic process, and lactic acid is formed. In this stage more oxygen is required than normal stage. This requirement of extra quantity of oxygen is called as oxygen debt.

This extra oxygen is used up by the lactic acid for its aerobic oxidation. By this process creatine phosphate is produced. Some quantity of required oxygen is supplied by myoglobin which has capacity to store oxygen for future. During training of athletes rate of oxy- contraction of muscle is increased. Thus, athletes required less oxygen debt. 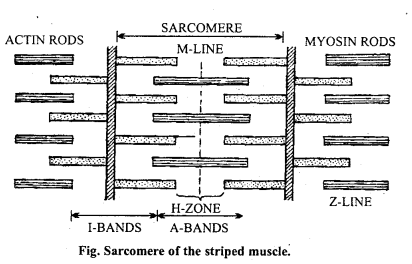 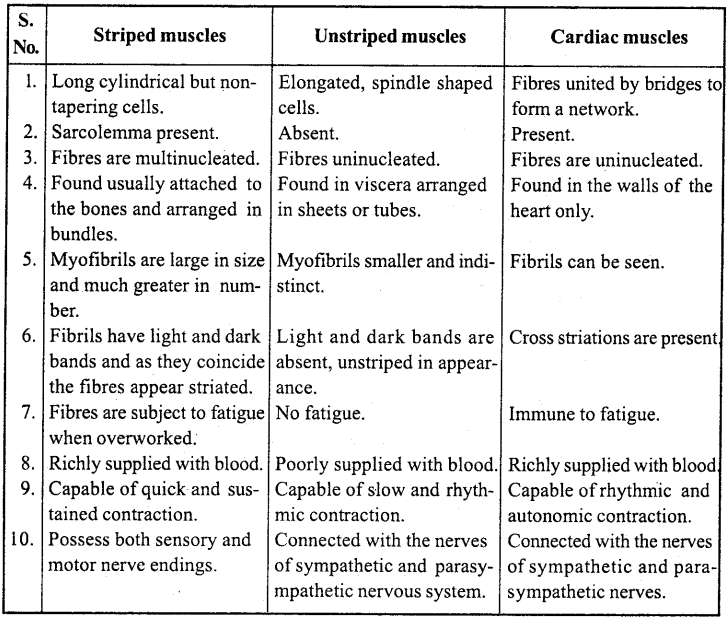 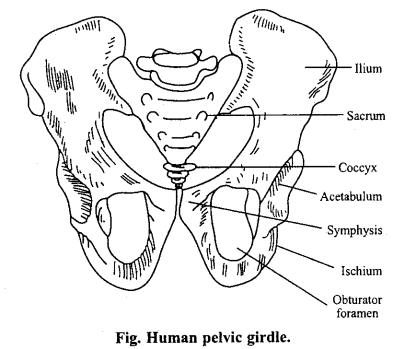 (b) Difference between Red and White muscle fibres

Question 2.
Describe main steps of muscular contraction. (NCERT)
Or,
Draw a labelled diagram of striped muscle and describe mechanism of muscular contraction in brief.
Answer:
Structure of striped or voluntary muscles: Since their movement is always at the will of the animal possessing them, they are known as voluntary muscles. They are always attached with the skeleton, hence called as skeletal muscles. Their cells are long and tubular and each is surrounded by thin membrane called sarcolemma. Many nuclei are found in the sarcoplasm surrounded by sarcolemma; therefore, muscular tissue is multinucleated or syncytial. A large number of parallel myofibrils are present in the sarcoplasm.
Transverse bands of light and dark shade are found in each muscle fibres. Dark bands are known as ‘A’ discs or Dobie’s dots while light bands are called ‘I’ discs. Each ‘I’ disc is divided into two another band known as ‘Z’ disc or Krause’s membrane. Similarly ‘A’ disc is also divided into two parts by Hensen’s disc or ‘H’ zone. The part between two ‘Z’ discs is known as sarcomere. 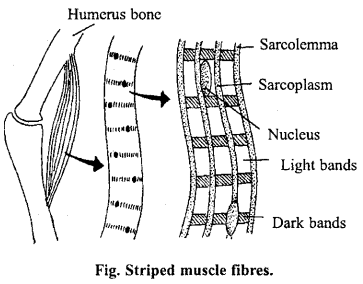 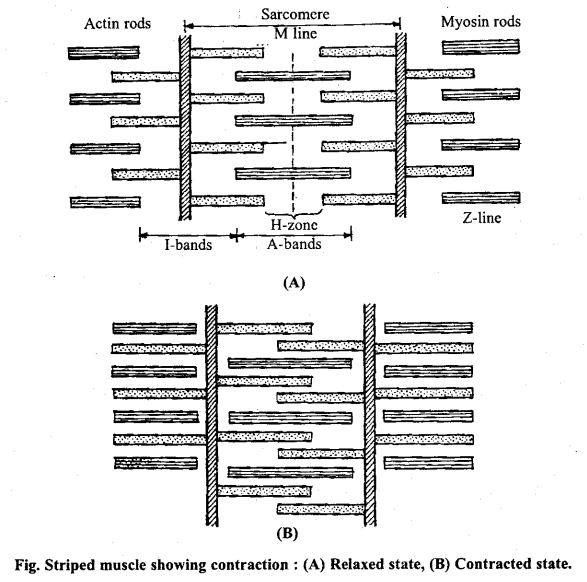 Working of striped muscle fibre: The muscle fibres contract and relax on being excited by the nerve fibres. H.E. Huxley and A.F. Huxley explained the working of muscle fibres with the help of electron microscopic studies. The theory proposed by Lein is known as sliding filament theory. It says that during contraction the actin filaments slide over the myosin filaments. There is no change in the length of ‘A’ bands at the time of contraction.

1.Perfect joints: These joints have synovial cavity which allow movement in more than one plane. The perfect joints may be of following types : 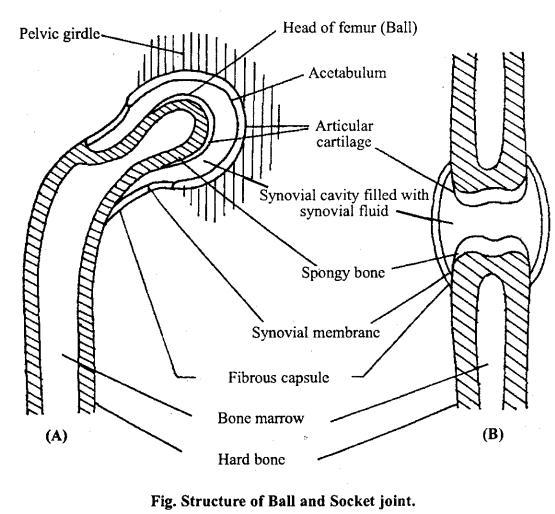 (a) Bail and Socket joint: Arthritis is a disease characterized by the inflammation of the joints. In this disease, the synovial membrane secretes extra fluid which causes swelling and pain in the joints. A hard tissue deposits over the articular cartilages. As a result the joints become stiff.

(c) Hinge joint: It is just like a hinge of a door, allowing movement in one plane, e.g. Elbow joint, knee joint, ankle joint.
(d) Gliding joint : In such joint the articulating surface of the bone can glide one above the other, e.g. Joint between radio ulna and carpal.

(e) Saddle joint: It resembles the ball and socket joint except that in this case neither the ball nor the socket is fully developed, e.g. Metacarpal of the thumb joining the wrist bone in man.

2. Imperfect joint: These joints which do not possess synovial cavity or connecting ligaments are called imperfect joints, e.g. Joints between ileum of pelvic girdle and transverse process of sacral vertebrae. 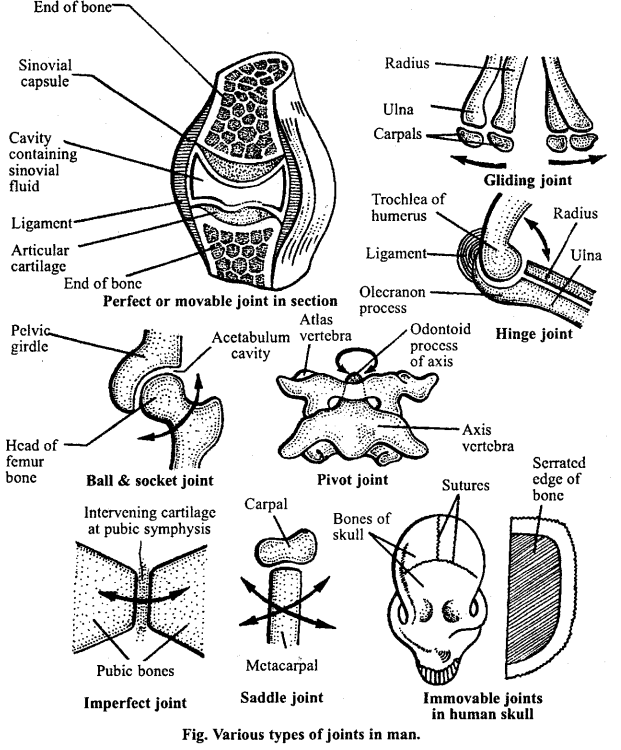 Question 4.
What is Axial Skeleton? Describe various bones of Axial skeleton of human.
Answer:
Axial Skeleton: Skeleton which forms axis of the body is called as Axial skeleton. It consists of skull, Hyoid, vertebral column and ribs.
1. Skull: It is formed of 28 bones and is skeleton of the head region. Skull can be further divided into following regions :
(i) Cranium or brain box: It encloses the brain and is formed of eight bones namely frontal, parietal (two), temporal (two), occipital, sphenoid and ethmoid.

(ii) Facial bones : These form facial part of the skull and are fourteen in number. These include nasal 2, maxillary 2, squamosal 2, mandible 1, lachrymal 2, palatine 2, turbinals 2 and vomer 1.

4. Sternum and ribs: It forms the floor of thoracic basket and supports anterior part of chest. Sternum has three parts manubrium, body and xiphoid process. 12 pairs of ribs are associated with the sternum.
Functions :
(i) Ribs form thoracic cavity along with sternum and vertebral column.
(ii) It protects lungs and heart.
(iii) These help in breathing.

Question 5.
What are Appendicular skeleton? Explain the bones of appendicular skeleton in man.
Answer:
Appendicular Skeleton: It is formed of bones appended to axial skeleton i.e., pectoral girdle, pelvic girdle and associated limbs.
Girdles: It consists of two types :
1. Pectoral girdle : It is found in the shoulder region where forelimbs join with it at the glenoid cavity. It is generally a duplex structure and functions as an intermediary structure through which the weight of the body is transferred to the forelimbs. Pectoral girdle is formed of two bones, scapula (2) and clavicle (2).

2. Pelvic girdle: It provides articulation with bones of hind limbs at acetabulum cavity. It has two halves, each half has three main bones ilium dorsal in position, ischium and pubis ventral in position. Each half of the girdle forms innominate bones or osinnominatum.

3. Limbs: These are meant for locomotion in tetrapod vertebrates. Limbs are differentiated into:
(i) A pair of forelimbs,
(ii) A pair of hind limbs.
(i) Forelimb : Forelimbs are attached to the pectoral girdle. Each forelimb has upper arm, forearm and hand. There are 30 bones in each forelimb namely, humerus in the upper arm, radius and ulna in forearm, eight carpals in the wrist, five metacarpals in the palm and 14 phalanges in the fingers of the hand.

(ii) Hind limbs : Hind limbs are attached to the pelvic girdle. Each hind limb has thigh, shank and foot. There are thirty bones in each hind limb namely, femur in the thigh, patella in the knee, tibia and fibula in the shank, 7 tarsals in the ankle, 5 metatarsals insole and 14 phalanges in the toes of the foot.

Question 7.
Which one is the contractile protein of a muscle :
(a) Actin
(b) Myosin
(c) Tropomyosin
(d) Globulin.
Answer:
(a) Actin

Question 10.
Ends of long bones are covered with.
(a) Cartilage
(b) Muscles
(c) Ligaments
(d) Blood cells.
Answer:
(a) Cartilage

4. In muscle fibre calcium is stored in the ……………… .
Answer:
Sarcoplasmic reticulum,

1. Actin is located in the fine fibre.
Answer:
True,

5. Sternum lies in the ventral surface of the body.
Answer:
True.

3. Where is glenoid cavity found?
Answer:
In shoulder region,

4. Where is acetabulum found?
Answer:
In articulation of hind limbs,

5. Give one-one example of the following :
(a) Ball and socket joint,
(b) Immovable joint.
Answer:
(a) shoulder and hip joint
(b) Bones of the skull.