Kick start your preparation by using our online resource Madhya Pradesh State Board Solutions for Class 9  English The Rainbow Solutions Chapter 11 Grandpa Fights an Ostrich. You can even download MP Board Solutions for Class 9 English free of cost rough direct links available on our page. Clear your queries and understand concept behind in a simple manner. Simply tap on concept you wish to prepare chapterwise and go rough it.

A. Refer to the dictionary and find out the meanings of the following. Use them in sentences. You can use the sentences given in the dictionary as models.
Strange, instant, passion, emerge, unqeual, strides elude, dodging, terrific, desperate
Answer:

B. Use the following expressions in your own words.
needless to say strange though it may seem
a glimpse of
in an instant
suddenly.
Answer:

C. Pick out from this lesson some words that suggest :
1. movement .
2. surprise
3. anger.
Answer:

A. Answer each of the following questions in about 25 words.
1. Why did Grandpa decide to go through the ostrich camp?
2. Why did he feel quite safe in such a dangerous situation?
3. What was the only chance to keep him safe during the chase?
4. Why was the huge bird frightened?
5. Describe the unexpected withdrawal of the ostrich.
Answer:
1. Grandpa’s horse had met with a minor accident. He had no other mode of transport. He was a great walker. The passage through the hills was shorter by six miles. Therefore, he decided to go through the ostrich camp.

2. It was dangerous to cross an ostrich farmering the breeding season. The mate ostriches are violent then. They can trample a man to death. Grandpa had his pet dog with him. Even the biggest ostriches are scared even of a small dog. Therefore, he felt quite safe in such a dangerous situation.

3. The grandpa had nothing to defend himself. He turned and ran towards the fence. But it was an unequal race between a man and an ostrich. There was only one chance to keep him safe during the chase. It was to get behind a large bush and try to elude the bird. A dodging game was his only chance.

4. The huge bird came upon grandpa when he had fallen down. But it did not strike. By this time Grandpa’s dog had come there. Ostriches are mightily scared of the dogs. Therefore, the huge bird got frightened. On hearing the dog’s bark, he turned and ran off.

B. Answer each of the following questions in about 50 words.

1. Why did Grandpa dare to cross the ostrich farm?
2. Describe the nature and behaviour of ostriches as known to Grandpa.
3. There was an unequal race between Grandpa and the ostrich. Describe it.
4. What traits of character do you notice in Grandpa?
Answer:
1. Grandpa’s horse had met with an accident. So he had to come back on foot from his workplace. An ostrich camp lay on L the way. It was their breeding season. The grandpa’s dog was with him. He knew it well that he was quite safe in the company of his dog. The ostriches were mightily scared of even a small dog. The journey through the hills could save the grandfather a distance of six miles. Therefore, he dared to cross the ostrich farm. He was over confident that no harm could come to him so long as his dog was with him.

2. Grandpa was fairly familiar with the ways of ostriches. He knew that male birds were very violent in breeding season. They could attack on the slightest provocation. He also knows that they , are mightily scared of a dog. It was quite strange that even the biggest ostrich would run away at the sight of even a small dog. It would try to save its own life and never try to fight with even the pet dug.

3. Suddenly, a big male ostrich emerged from a prickly bush about a hundred yards away. He came bounding towards the grandpa. The grandpa turned and ran towards the fence. However, it was an unequal race. Grandpa’s steps were of the length of two or three feet. Hie ostrich’s steps were like strides of sixteen or twenty feet. It means the ostrich’s speed was eight times of the grandpa’s speed.

4. Grandpa had a bundle of good qualities. He was adventurous. He had the courage to go through the hills knowing well that there was an ostrich camp on the way. The male ostriches could even kill him during die breeding season. He was over confident of his dog’s help. He started a dodging game when an ostrich ran towards him. He caught-the ostrich by die wing. It was an act of fearlessness and courage. He covered his face with his hands when the ostrich was upon him. He was careful enough not to come directy in front of his deadly kick.

A . Study these sentences.

A. Discuss with your friends in the class and find out main characteristics of Ostriches.
Answer:
Class-room discussion.
The following are the main characteristics of ostriches. Almost all birds have four toes but an ostrich has only two toes. Its feet resemble those of the cattle and antelopes. Its inner toes have disappeared. The ostrich can fly as well as run. It can run at a speed of 34 km per hour.

A. How will you save yourself if you are chased by a dog?
Answer:
It is a common sight that dogs chase human beings in dark and lonely places. If a man gets scared and starts running, he is sure to be bitten. If I am chased by a dog I shall call the dog as ‘Montu’ very affectionately. I will try to pat the dog. The best thing to avoid a chasing dog is to offer it a piece of bread. I shall also pick up some stone lying nearby and show it to the dog. The dog will definitely retreat because it is always careful about its own safety.

B. Make an entry in you diary of a day when you missed your school bus. (150 words)
Answer:
New Delhi. 7th March, 2007
I was appearing at the Secondary School’s Boards examination. My examination was scheduled to start on 6th March, 2007. I got ready to catch the school bus. Unforunately, I happened to miss it. I felt like a fish out of water. I was alone at the bus stop. I had not brought my mobile phone lest it should be lost in the school. I was sweating profusely. My school was located at a distance of ten kilometres. I had only twenty rupees in my pocket. No three wheeler could be hired with this petty amount. I found myself in a tight comer. Just then I noticed a neighbour coming towards me driving his car. His daughter too had to appear at the examination. He gave me a lift. He reached the school in time. Life revived in me due to that good Samaritan, my neighbour.

A. An ostrich is a large bird. There is a proverb on the habit of this bird. Why shouldn’t we adopt ‘ostrich policy?’ Think.
Answer:
An ostrich is a very large African bird with a long neck and long legs. Ostriches cannot fly. But they can very fast. They are known for their ‘self-deluding’ methods. We should never adopt ‘ostrich policy’. We should rather obey the voice of our inner conscience. He who disobeys his inner voice loses confidence and “ultimately suffers.

B. When a person encounters a dangerous situation, he prepares himself to face it. Experience helps him? How?
Answer:
Life is full of obstacles. Everyone has to encounter a dangerous situation some time or the other. Those who get nervous have to pay through the nose. One should learn from one’s own and others’ experiences not-to lose heart but show his wit and manliness at such times. One must always remain prepared for the worst. One day I had picked up five oranges from a cart. My pockets were bulging with them. A policeman caught me. He locked me in a cabin. He went away to bring another policeman. In the mean while. I ate the oranges with fibre, barks and pips. The policemen arrived. They found no evidence against me. They released me with a cheerful face. A thief’s experience had helped me.

We read about ‘disaster management.’ Collect information about the situation described below :
Answer:

Short-Answer Type Questions (In About 25 words)

Question 2.
Describe the attack of an ostrich on Grandpa.
Answer:
Grandpa was attacked by an ostrich. Grandpa began running towards the fence. But his steps of two or three feet were nothing in comparison to the ostrich’s strides of sixteen to twenty feet.

Question 3.
How did the Grandpa escape?
Answer:
Grandpa adopted the game of dodging with the ostrich. When the ostrich attacked Grandpa, Grandpa jumped sideways and it saved him. Moreover, the ostrich saw Grandpa’s dog. An ostrich is always frightened of a dog. So he ran away leaving him lying on the ground.

Question 1.
Describe the Ostrich’s attack on Grandpa.
Answer:
Grandpa’s dog started barking and the Grandpa started shouting. It startled the ostriches and they began darting to and fro. Just then the dog saw a hare and chased him Suddenly a male ostrich emerged from a thicket about a hundred yards away. He stood still and stared Grandpa. For a moment it began spreading its wings. It also erected its tail and started bounding towards Grandpa. It pouhed on the Grandpa who held its wings tightly. A dodging game took place between the two. Ultimately the Grandpa fell down on the ground. His life was saved when his dog appeared on the scene.

Ruskin Bond’s grandpa had worked for some time on the East African Railway before he joined the Indian Railways. He had an encounter with an ostrich during his service in Africa.The author’s grandpa was working in the laying of a new railway line. His workplace was twelve miles away. He was returning on foot one day- To save half the distance, he took a short route through the hills. There lay an ostrich ‘camp’ on this way. This was the breeding season. The male birds are very dangerous then. But the grandpa felt safe with his dog. Even the biggest ostrich is afraid of a dog.

The grandpa got through the wire fencing of the farm. The ostriches were feeding some distance away. His dog chased a hare. He called the dog in vain. Just then he saw a big male os .rich com mg out of a bush about a hundred yards away. He stood still staring at the grandpa. Soon he spread his wings and came jumping towards the grandpa. Grandpa ran towards the fence. But the ostrich soon overtook him. There was a strange encounter. Grandpa took care to avoid his kick. He was soon breathless and helpless. He circled a big bush. He was likely to drop from tiredness. Somehow he held the ostrich’s wing. The frightened ostrich began to dance round and round. Grandpa kept clinging to the ostrich’s wing.

Suddenly the ostrich went into reverse. Grandpa fell down and the ostrich was upon him. The ostrich did not strike him. He was ready to rip grandpa open. Soon the ostrich jumped back and ran fast. Grandpa heard his dog bark. The dog and the grandpa were clear of the camp. 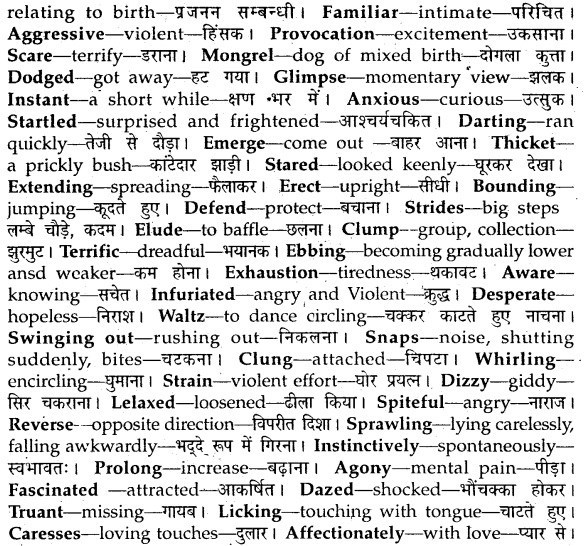 We believe the information shared regarding MP Board Solutions for Class 9 English The Rainbow Solutions Chapter 11 Grandpa Fights an Ostrich Questions and Answers as far as our knowledge is concerned is true and reliable. In case of any queries or suggestions do leave us your feedback and our team will guide you at soonest possibility. Bookmark our site to avail latest updates on several state board Solutions at your fingertips.