Answer the following questions in brief:

Question (b)
Write about the technology and technical knowledge in the Harrappan civilization?
Answer:
Harrappan civilization belong to the Bronze Age. Bronze is made by mixing zinc or tin with copper. Bronze is stronger than copper. The things found in excavations. prove that the people of this civilization had well developed the art of melting, moulding Their doors and windows were made of and mixing metals.

The artisans were proficient in making earthern untensils, rasp and toys. They also made ornaments of silver, gold and precious stones. The statue of a dancer in bronze is the best example of the Harappans Sculpture.

Question (d)
What tools were used by the Harappan people for weight and measurement?
Answer:
The Harrappan people used “weights” and “measuring rods” for weighing and measuring.

Give detailed answers to the following questions:

Question 3.
Question (a)
Explain the planning of cities in Harrappan?
Answer:
Harappan cities and their town planning:

The cities of Mohan – jo – daro and Harrappa were well – planned. They were divided in two parts. The upper part built on raised platforms is known as citadel. The lower part where majority of population lived had to take refuse sometimes in the citadel. The roads in the cities were straight and intersected each other perpendicularly.

Grainaries were the most impressive buildings in the citadel of Harrappa. They were neatly laid out in rectangles and lay close to the river. These granaries used to be full to meet out the demands of city dwellers. Some palace-like buildings have also been found. A building having a big hall has also been found. The best known of the building is citadel is called Great Bath.

The Great Bath resembled a large swimming pool. Houses in the Mohen – jo – daro were carefully planned. They were built of brick and had thick, strong walls, which were plastered and coloured. The roofs were flat. Their doors and windows were made of wood. The kitchen had a fireplace and large jar of pottery.

The main points of Harrappan’s cities:

Question (b)
What do you know about the religious beliefs of the Harrappan people?
Answer:
Religious Beliefs of Harrappa People:
The Historians have made some guess work about the Harrappa people. Clay figures of mother goddess have been found, so they probably worshipped these. A seated figure of a male god, carved on a small stone seal was also found. This Pasupati seal was found at Mohen – jo – daro. Some of the Harrappan people buried their dead in graves, other practised urn burial. They believed that there was life somewhere even after death because often contained household pottery, ornaments and mirrors.

Question 4.
Fill in the blanks:

Question 5.
Match the civilizations with the river valleys in which they developed.

Question (b)
Which among the following metals was mostly used by the Harrappans?
(a) iron
(b) copper
(c) gold
(d) silver
Answer:
(b) copper

Question 1.
Write the achievements of the Harrappan Civilization in a sequence?
Answer:
Please do with the help of your teacher. 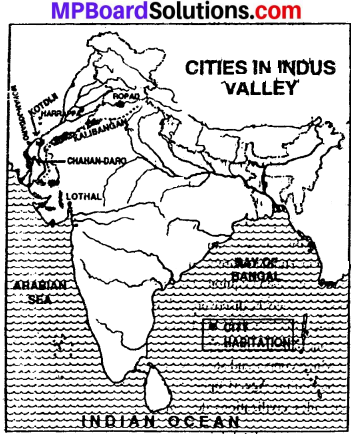