Question 1.
Question (a)
How was Ashoka’s attitude changed?
Answer:
Ashoka was saddened by the wounded and dying soldiers and the unhappiness that Kalinga war had caused to the women and children. When he saw so much bloodsheel, he was very disturbed. He vowed never to go to war again. He then decided that he would not fight any more.

Question (c)
In what scirpt are Ashoka’s petrographs found?
Answer:
Ashoka gave many messages to the people, which are still found in the form of petrographs. These petrographs were inscribed on such places that people could read them and learn something. The petrograph of Ashoka were inscribed in Bramhi, Kharosthi and Aremaic. They all belong to the language Prakrat. The Bramhi script in India, Khorashti in Bangladesh and Pakistan, and Aremic was in Afganistan.

The language and script of common people was used in the petrographs so that they could understand the thoughts of the Emperor. 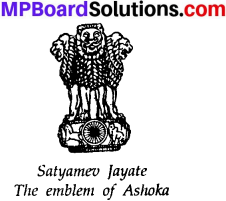 Question (d)
What was the work of Dharma Mahamatyas?
Answer:
After the war of Kalinga the feelings of remorse and misery led Ashoka to embrace the Buddhist religion. After twelth year of his reign, he began issuing edicts. From that time he exerted himself energetically to propagate Buddhism. He visited the holy places of Buddhism.

He instructed his high officials to proceed oh circuit every five years and to spread the dharma among the people. He instituted a special class of the officers called Dharma Mahamatras whose sole business was to propagate dhamma among the people. Moreover, he enacted a code of morality for his people to lead a peaceful and virtuous life. This he called dharma.

The edicts were written in Prakrit, the language spoken by the common people. In those days, Sanskrit was the language of the learned. To spread the essential features of his dharma he engraved them on rocks, pillars, and caves, throughout his vast dominions.

In Afghanistan Greek was spoken by the common people at that time. So some of Ashoka’s edicts were also composed in Greek and inscribed in Afghanistan.

Question (e)
Who used to give advise to the emperor?
Answer:
There was a council of people called Mantri Parishad to advise the king. The heads of all the departments lived in Patliputra. The empire was divided into four provinces. Each province was governed by a governor. Most of the governers were the princes. Every province was further divided into districts and in districts, villages were also included. There were various officers to look after the law and order.

Answer the following questions in details:

Question 2.
Question (a)
Describe the expansion of the empire of Chandragupta?
Answer:
Chandragupta raised an army and dethroned king Nanda. He himself became the king. The people welcomed the new king. He established his power in Magadah. He turned his eyes towards the Punjab in the northwest. He Soon won over the Punjab. In 305 B.C. after a long compaign in the far north he defeated Alexander’s general Seleucus Nicator, crossed the river Indus and conquered Afghanistan. In this way Chandragupta established his empire over the whole of northern India.

Question (b)
Give the cause of decline of the Mauryan Empire?
Answer:
The vast Mauryan empire established by Emperor Ashoka and his ahcestors lasted for a little over a hundred years It began to break up after the death of Ashoka. It was difficult to maintain contact and to administer such a large empire. The successors of Ashoka were not as capable as him. Adequate taxes needed to run the empire could not be collected.

The several rulers under Ashoka now became independent. Thus, the empire became weak. As a result of this disunity the Greek ruler of Bactria attacked India from the north west but since he did not get help from any other king, he was defeated. After twenty years, in 185 B.C. Pushymitra Shungha murdered the last Mauryan ruler. The Mauryan dynasty thus came to an end.

Question (c)
What did Ashoka do for the public welfare?
Answer:
Ashoka looked upon his subjects as his own children and did all he could to make them lead better and happier life. He writes in his edicts, “Men are my children.” He did the following welfare for the good of his people:

Question 3.
Question (a)
What is called an empire?
Answer:
When the kings expand the limits of their states, then those states are called empire.

Question (c)
What religion did Ashoka believe?
Answer:
Ashoka became the follower of Buddhism. He believed in the high human ideals so that people live in peace and follow moral conduct. He named them Dhamma.

Question (d)
What country did Ashoka send his son and daughter?
Answer:
Ashoka sent his son Mahendra and daughter Sanghmitra to Sri Lanka for preaching Buddhism.

Question 4.
Fill in the blanks:

Question 1.
Write down what you see on the currency notes and postage stamps?
Answer:
Do yourself.