Question 1.
According to Ruther ford’s atomic model the electrons inside the atom are:
(a) Stationary
(b) Centralized
(c) Revolving
(d) None of these.
Answer:
(c) Revolving 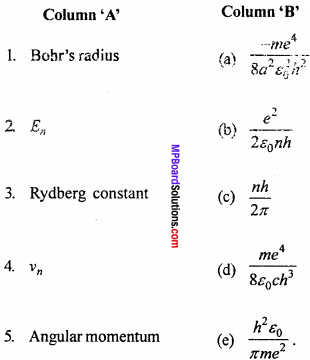 Question 4.
Write the answer in one word/sentence:

Question 3.
Define stable orbit in Bohr’s atoms model.
Answer:
The stable orbits are those orbits in which the angular momentum of the electron (revolving in those orbits) is integral multiple of \(\frac {h}{2π}\)

Question 6.
What is importance of negative energy of electrons in an orbit?
Answer:
The nucleus and electrons makes a bounded system together.

Question 8.
Why the electrons always revolve round the nucleus?
Answer:
In order to provide a stable configuration to the atoms.

Question 9.
What is Bohr’s radius?
Answer:
The radius of first orbit of a hydrogen atom is called Bohr’s radius. Its value is 0.53 Å.

Question 4.
What is meant by transition? How much time it takes?
Answer:
The jump of an atom from one energy state (level) to other is called transition. It takes about 10-8 sec.

Question 7.
With the help of fundamental constants e, me and h establish a quantity in the dimension of length.
Answer:
This quantity is Bohr’s radius

2. When an electron jumps from energy level of higher energy E2 to the energy level having energy E1 then a photon is emitted whose energy is equal to the difference of energies of the two levels i.e., E2 – E1 = hu.
Where o is frequency of emitted photon. This is called Bohr’s frequency condition. 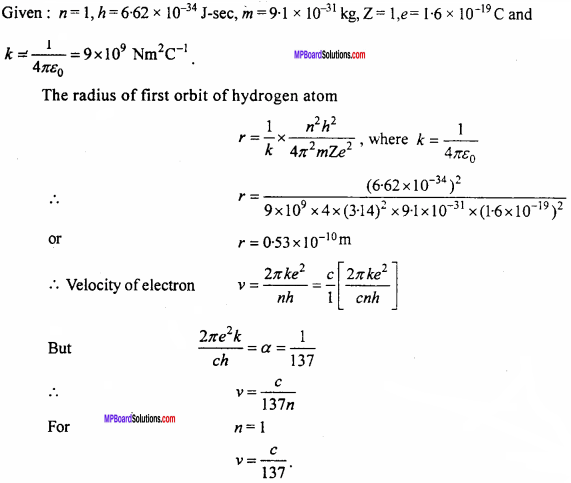 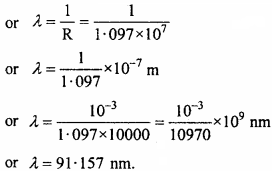 The thickness of gold , foil is about 10 cm. The scattered α – particles falls on screen S in which ZnS is coated α – particles produce flash of light on this screen which can be observed by a microscope M.

Importance:
By the Rutherford’s experiment it is come to know that the positive charge of the atom is concentrated at the central core of atom, which is called as nucleus.

Question 2.
The total energy of an electron in the first excited state of the hydrogen atom is about -3.4 eV : 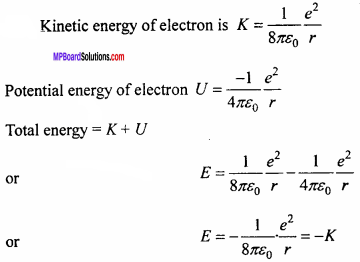 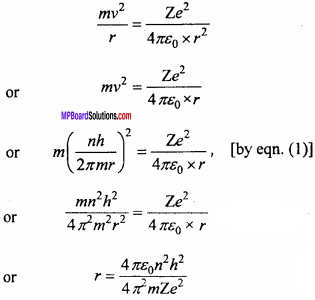 In the above expression except n all the quantities are constant.
∴ r ∝ n2. 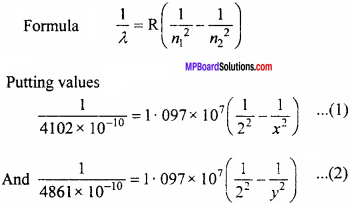 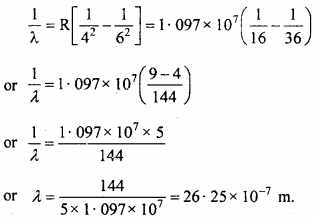 2. The electrostatic attraction force between nucleus and electron provides the require centripetal force to electrons to revolve round the nucleus.

3. The electron does not revolve round the nucleus in all possible orbits, but they revolve in some specific orbits. These orbits are called as stable orbits.

5. The electrons revolving in stable orbits neither absorb nor emit the energy. The emission or absorption of energy takes place only when they jump from one orbit to other.

Question 2.
If the value of energy for an impact parameter is increased then, will the scattering angle increase or decrease? (NCERT)
Solution:

If the energy is increased then in the same ratio, the value of cot(θ/2)should be increased i.e., the angle of scattering will decrease.

Question 3.
What should be the value of angle of scattering for impact parameter b = 0? (NCERT)
Solution:
We know that 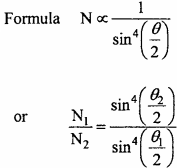 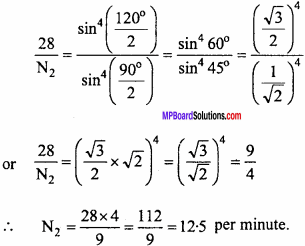