Question 6.
Pyramid of biomass of lake ecosystem is :
(a) Upright
(b) Inverted
(c) Upright or inverted
(d) None of these.
Answer:
(b) Inverted

Question 7.
Vegetation present between two communities :
(a) Ecad
(b) Ecotype
(c) Ecotone
(d) None of these.
Answer:
(c) Ecotone

Question 9.
Serial development of plant community is called :
(a) Attack
(b) Succession
(c) Both (a) and (b)
(d) None of these.
Answer:
(b) Succession

Question 10.
Plants starting succession in any area are called :
(a) Pioneer
(b) Sere
(c) Displacer
(d) All of these.
Answer:
(a) Pioneer

Question 12.
The study of ecology of a species is called :
(a) Ecology
(b) Autecology
(c) Synecology
(d) None of these.
Answer:
(b) Autecology

Question 3.
Match the followings:
I.

Question 4.
Write the answer in one word/sentances:

Some gases are also found in biosphere example Helium, Neyon and Crypton are found in less quantity.

1. Producers – All the green plants.

2. Consumers – Depends on others for food.

Question 4.
Differentiate between biome and ecosystem.
Answer:
An ecosystem is the interaction of living and non – living things in an environment. A biome is a specific geographic area notable for the species living there.

Question 8.
When many food chain operate simultaneously and interlock such pattern is formed.
Answer:
Food web.

Question 10.
What are fungi and bacteria called in an ecosystem?
Answer:
Micro – consumer or Decomposer.

Question 11.
Which part of the energy is transferred from one trophic level to other in ecosystem?
Answer:
10%.

Question 13.
Name the word which is similar to ecosystem given by Prof. R. Mishra.
Answer:
Ecocosm.

Question 18.
Give examples of decomposers.
Answer:
Bacteria and Fungi.

Question 20.
Which form of nitrogen is absorbed by plants?
Answer:
In the form of nitrate ion (NO3–)

Question 1.
Draw a pyramid of energy of grassland ecosystem. 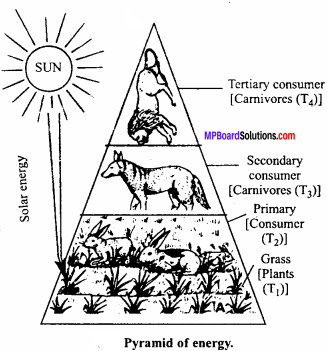 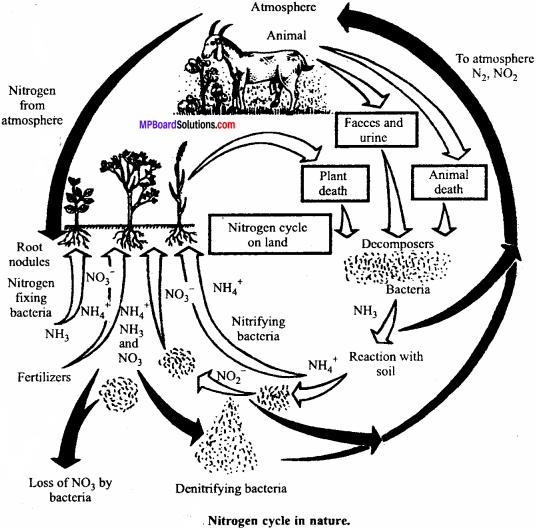 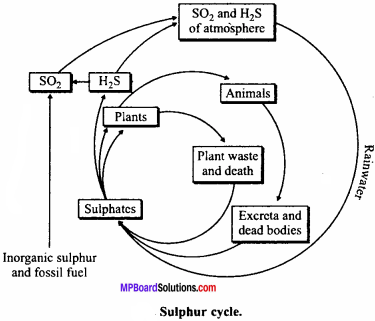 Question 4.
Explain the effect of light on plants.
Answer:
Effect of light on plants:
Light is the source of energy. It is essential for life. It is an important factor of an ecosystem. The existence of life on earth is because of light obtained from sun. Sunlight is essential for photosynthesis, help in preparation of food for the whole living world. Light effects biological activities of plants by its intensity, period and duration. Plants are classified into following two categories on the basis of requirement of light intensity:

Question 5.
Explain the meaning of food web and draw its diagram.
Answer:
Food Web:
In nature, foodchains are not isolated sequences, but are interrelated and interconnected with one another. When many foodchains operate simultaneously and interlock such pattern is termed as food web. Thus, the food web is a description of feeding connections between the organisms which make up a community. Energy passes through one trophic level to next via these food web links, example a rat feeds on various kinds of grains, fruits, stems, roots, etc.

A rat in its turn is consumed by a snake which is eaten by a falcon. The snakes feed on both frogs and rats. Thus, a network of food – chains exists and this is called food web. The food web gets more complicated because of variability in taste and preference availability and compulsion and several other factors at each level. For example, tigers normally do not feed on fishes or crabs but in Sunderbans they are forced to eat them. 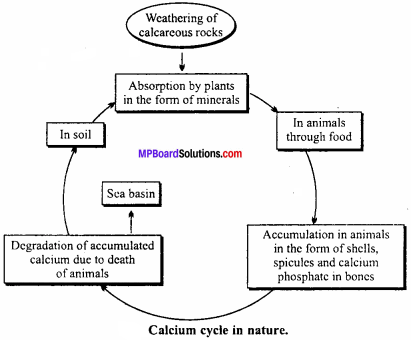 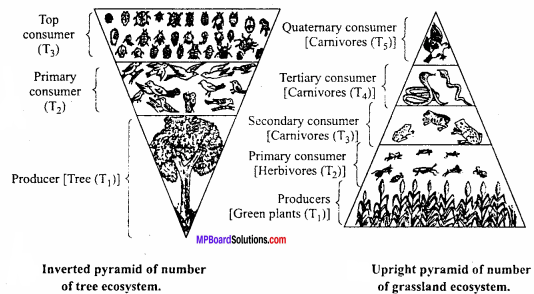 Question 8.
What do you mean by ecosystem? Describe the important components of a pond ecosystem.
Or
Write about role of decomposers in an ecosystem with example.
Answer:
Ecosystem:
The system resulting from the interaction between organisms and their environment is called as ecosystem.

Ecosystem:
The system resulting from the interaction between organisms and their environment is called as ecosystem. 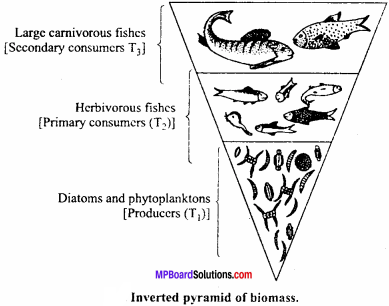 2. Differences between Production and Decomposition :

3. Differences between Upright pyramid and Inverted pyramid:
Upright pyramid:
When the number of producers or theirbiomass is maximum in an ecosystem and it decreases progressively at each trophic level in a food chain, an uprightpyramid is formed.

Inverted pyramid:
When the number of individuals or their biomass at the producer level is minimum and it Increases progressively at each trophic level in a food chain, an inverted pyramid is formed.

5. Differences between Litter and Detritus:
Litter:
The dead remains of plants (leaves, flowers etc.) and animals excreta which falls on the surface of the earth in terrestrial ecosystems is called litter.

6. Differences between Primary and Secondary productivity:

The various processes involved in decomposition are as follows :

1. Fragmentation:
It is the first step in the process of decomposition. It involves the breakdown of detritus into smaller pieces by the action of detritivores such as earthworms.

2.Leaching:
It is a process where the water soluble nutrients go down into the soil layers and get locked as unavailable salts.

3. Catabolism:
It is a process in which bacteria and fungi degrade detritus through various enzymes into smaller pieces.

4. Humification:
The next step is humification which leads to the formation of a dark coloured colloidal substance called humus, which acts as reservoir of nutrients for plants.

5. Mineralization:
The humus is further degraded by the action of microbes, which finally leads to the release of inorganic nutrients into the soil. This process of releasing inorganic nutrients from the humus is known as mineralization. Decomposition produces a dark coloured, nutrient rich substance called humus. Humus finally degrades and releases inorganic raw materials such as CO2, water, and other nutrient in the soil.

Plants utilize maximum part of this energy to do its biological functions. Some of it is converted into heat and released in the environment. Remaining part of the energy is stored in various components of the body. When a consumer eats these producer plants, the energy is then transferred into its body.

2. Biotic factors:
Three types are there

(a) Producers :
This type of crop (dominant species) depends upon the climate, season and the choice of the farmer.

Question 2.
Explain consumer components ecosystem of a pond in brief.
Answer:
Consumers:
They feed on producers directly or indirectly. It is of following categories:

1. Primary consumers:
Varied forms of zooplanktons are found in the water surface. Most of them are unicellular protists, such as Amoeba, Paramoecium whereas some are multicellular crustaceans, such as Daphnia, Cyclops, etc. Animals which are found under the surface of water are called as benthos, such as many types of fishes, crustaceans, molluscs, insects, beetles, etc. They too feed on producers.

Question 3.
Describe carbon cycle in an ecosystem.
Answer:
Carbon Cycle:
Importance of carbon:
Carbon is considered as the basis of life. Carbon is the most important constituent of proteins, fats and nucleic acids which form the essential constituents of protoplasm. 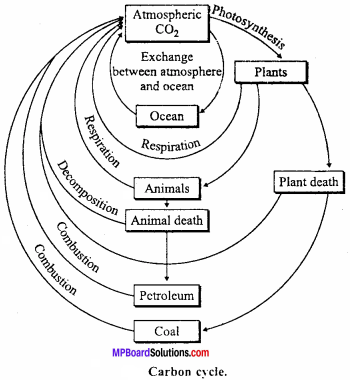 Recycling of carbon:
Carbon dioxide (CO2) is the main source of carbon for the living beings. The carbon of coal, graphite, petroleum are insoluble and carbonates are not available to the organism until they are burnt or chemically changed. Most of the carbon dioxide enters the living world through photosynthesis. In this process green plants trap CO2 from atmosphere and convert it into carbohydrates by using water and solar energy.

The amount of the carbon fixed by photosynthesis is nearly 7 x 1013 kg/year. The organic compounds synthesized in photosynthesis are passed from plants to the herbivores and carnivores. It is estimated that one hectare of a healthy forest produces about 10 tonnes of oxygen and absorbs 30 tonnes of carbon dioxide annually.

1. Pyramid of Biomass:
Biomass is the dry weight of living organisms per unit of space. The ecological pyramid, which shows the quantitative relationship of the standing crop at each trophic level/The pyramid of biomass shows gradual reduction in biomass at each trophic level from base to apex.

The pyramid of biomass may be :

2. Grassland biomes – They may be as below:

Grassland biome – Grassland biome or ecosystem has long grasses, Its, land is fertile. It receives approximately 25 to 75 cm average rainfall. Its component are:

Question 6.
What are biogeochemical cycles? Write in short sulphur and calcium cycle.
Answer:
Biogeochemical cycles:
All living organisms get matter from the biosphere components i.e., lithosphere, hydrosphere and atmosphere. Essential elements or inorganic substances are provided by earth and are required by organisms for their body building and metabolism, they are known as biogeochemicals or biogenetic nutrients.

Sulphur cycle:
Producers (green plants) need sulphur in the form of sulphates from soil or from water (aquatic plants). The animals get sulphur through food. Some animals get sulphur from water also. Sulphur is found in three amino acids hence, sulphur is component of most proteins, some vitamins and enzymes. Plants pick up sulphur in the form of sulphates. They are converted to organic form mostly as component of some amino acids. It is found in nature as element and also as sulphates in soil, water and rocks. After the death of plants and animals, they are decomposed by microbes like Asperigillus, Neurospora and Escherichia releasing hydrogen sulphide.

Calcium cycle:
Calcium is slowly released from the rocks by water and wind action. These are either blown into the air or absorbed by plants through their roots. Animals obtain it directly as compounds and also from plants. Calcium is released from plant and animal bodies by decomposition after death. Molluscs and Corals deposit a large quantity of calcium in their shells and skeletons making it unavailable for quick cycling.