Question 9.
On what factors the weight of a body depends upon a planet?
Answer:

Question 10.
How the magnitude of ‘g’ changes on the surface of earth?
Answer:
From equator to pole value of ‘g’ increases. It is minimum at equator and maxi¬mum at pole.

Question 13.
What is the value of g at the centre of the earth? What will be its weight?
Answer:
Zero, zero.

Question 17.
A man can jump six times more on the moon, than on the earth. Why?
Answer:
Because the value of acceleration due to gravity is six times less than that of earth.

Question 21.
What is escape velocity? On what factors does it depend?
Answer:
It is the least velocity with which a body must be thrown vertically upwards so that it just escapes the gravitational pull of earth.
It depends upon

Question 25.
What is parking orbit? What is its radius?
Answer:
The orbit in which the geo-stationary satellite is launched is called parking orbit. Its radius is nearly 42309 km.

Question 27.
What do you mean by weightlessness in the satellite?
Answer:
The necessary centripetal force to revolve in a circular orbit is provided by the gravity of earth. Hence, the net force on the satellite and the bodies inside it will be zero. Therefore, the weight of the body becomes zero.

Question 28.
Weightlessness is not felt on the moon, why?
Answer:
Due to gravity of moon, the bodies have weights on the moon, of course it is a satellite of earth.

Question 29.
Can a satellite be launched in an orbit which is not in the plane, passing through the centre of earth?
Answer:
No, because under this condition, the horizontal component of the force of at-traction between earth and satellite cannot balance the centripetal force. As a result, the satellite will be attracted towards the equatorial plane and its orbit will not be stable.

Question 30.
Can a satellite be launched in an orbit, so that it can be seen always above
Delhi?
Answer:
No, this is because Delhi is not on equator line.

Question 33.
What is the angle between the plane of revolution of satellite and axis of rotation ?
Answer:
90°.

Question 34.
In an artificial satellite a bob is hanging with a string, what will be the tension in the string ?
Answer:
Zero.

Question 38.
In an artificial satellite a mass of 2 kg is kept at spring balance. What will be the reading of spring balance ?
Answer:
Zero.

Question 40.
Inside an artificial satellite a body of mass 1 kg is hanged with a string. What will be the tension in the string ?
Answer:
Zero. 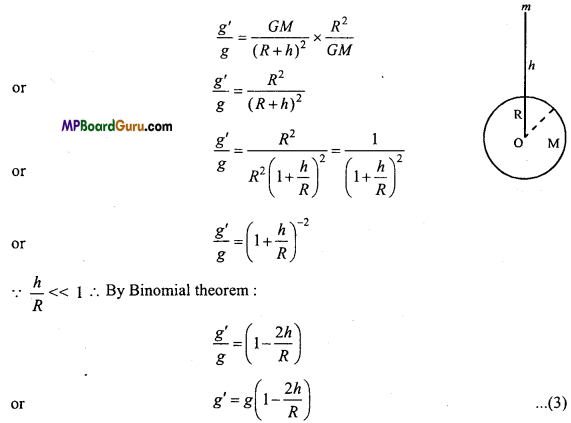 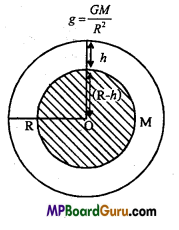 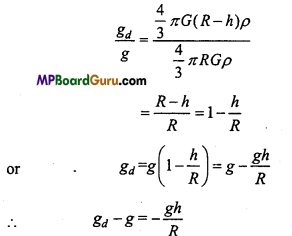 Question 4.
How does the value of ‘g’ change due to shape of the earth?
Answer:
The earth is not perfectly spherical in shape. It is slightly flattened at the poies
and is bulged at the equators
Let Rp and Re be polar and equational radius respectively.,
Hence, gp =\(\frac{G M}{R_{p}^{2}}\) and ge =\(\frac{G M}{R_{p}^{2}}\)
Where gp and ge are the acceleration due to gravity at the poles and equator respectively.

Question 5.
Show that the gravitational potential energy of an object near the earth
surface is ΔU = mgh.
Answer:
If a particle is raised from the surface of the earth to a height h above, then r1 = R (earth radius) and r2 = R + h (see figure).
So that, the change in potential energy ) 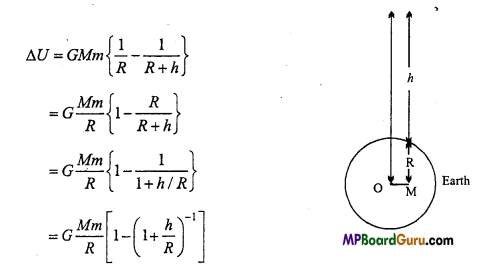 Using Binomial theorem and neglecting the higher powers of h/R, we get

Question 7.
What is orbital velocity? Derive an expression for the orbital velocity. Obtain an expression if satellite is near to the surface of earth.
Answer:
Orbital velocity:
Orbital velocity is the velocity which is given to an artificial satellite, a few hundred kilometre above the earth’s surface so that it may start revolving round the earth.
Let the mass of satellite is m and the radius of orbit from the centre of earth is r, revolving with a velocity of νo
∴ Centripetal force = \(\frac{m v_{o}^{2}}{r}\) …(1)
Also, by Newton’s law of gravitation,
F = \(\sqrt{\frac{G M m}{r^{2}}}\) …(2)
Since, centripetal force is provided by gravitation force, then 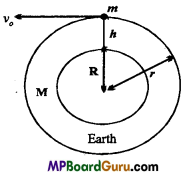 This is the required relation between escape velocity and orbital velocity.

Question 12.
What are the characteristics of geo-stationary satellite?
Answer: 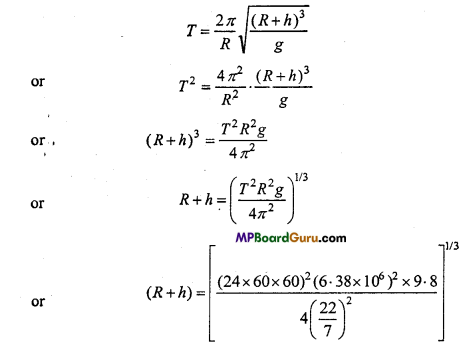 Question 15.
What conclusion did Newton obtain from Kepler’s law of planetary motion?
Answer:
Conclusions obtained by Newton : On the basis of Kepler’s law, Newton pro-pounded the following:
(i) The path of the planets round the sun can be approximately taken as circular, for which the necessary centripetal force can be obtained from the gravitational force of attraction between the planet and sun. The force acting on the planet is always towards the sun.

(iii) The force acting on the planet is directly proportional to its mass.
ie., F∝m.

Question 1.
Derive an expression for the escape velocity. Does it depend upon mass?
Answer:
Escape velocity : It is the least velocity with which a body must be thrown vertically upwards so that it just escapes the gravitational pull of earth.
It depends upon 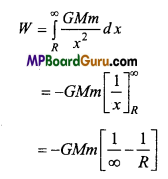 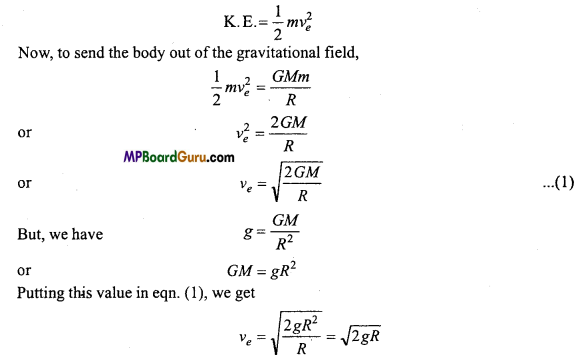 Question 4.
At what height the weight of a body be \(\frac{1}{3}\) times that of the surface of earth
Solution:
Given: 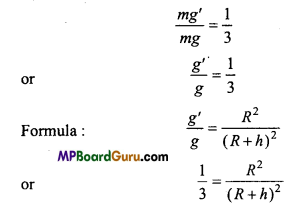 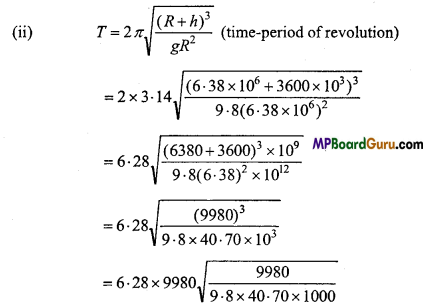 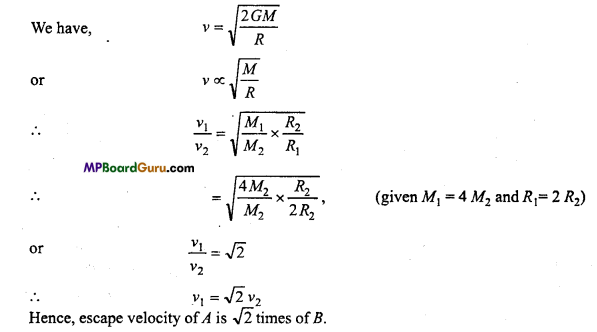 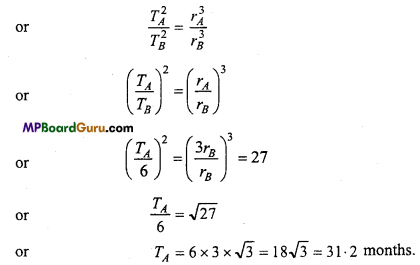 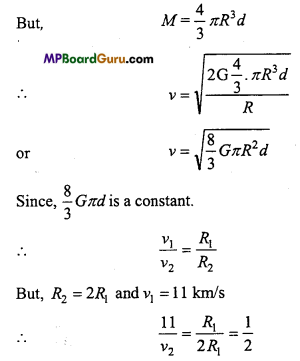 Question 17.
Who invented first the laws of planetary motion :
(a) Newton
(b) Kepler
(c) Galileo
(d) Aryabhatt.
Answer:
(b) Kepler

3. Acceleration due to gravity does not depend upon ………………. of the body.
Answer:
mass

7. Gravitational mass and inertial mass are …………………… to each other.
Answer:
equal

8. Gravitational intensity is equal to ……………………..
Answer:
acceleration due to gravity

2. Magnitude of G is different at different places.
Answer:
False

3. Magnitude of ‘g’ is equal at any point on surface of earth.
Answer:
False

4. Ratio of gravitational mass and inertial mass is one.
Answer:
True

5. Gravitational potential is negative at every point on earth surface.
Answer:
True

6. Principle of superposition is not applicable for gravitation.
Answer:
False

7. Value of escape velocity of a body depends upon its mass.
Answer:
False