Students get through the MP Board Class 11th Physics Important Questions Chapter 7 System of Particles and Rotational Motion which are most likely to be asked in the exam.

Question 2.
Define the term rigid body.
Answer:
A body is said to be a rigid body if an applying external force or during its motion the distance between constituent particle remain unchanged.

Question 4.
What is torque? Write its unit and dimensional formula.
Answer:
The turning effect of a force, to rotate a body about an axis is called torque. The torque is equal to product of force and perpendicular distance of force from the axis of rotation.
Torque = Force × Moment arm
τ = F × d
Unit: Its S.I. unit is.N × m.
Dimensional formula: [ML2T-2].

Question 8.
Define radius of gyration and give its unit.
Answer:
The radius of gyration of a body is equal to the perpendicular distance from the axis of rotation of a point at which if the mass of a body is assumed to be concentrated the moment of inertia is the same as the actual ‘moment of inertia of the body about that axis. It is represented by k.
UnIt: Its S.I. unit is metre.

Question 9.
On what factors does the moment of inertia of a body depend?
Answer:
(a) On mass of body (2) Distribution of mass from the axis of rotation.

Question 15.
Why the spokes are used in a wheel?
Answer:
The spokes increases the distance of rim from the axis of rotation, hence its moment of inertia increases, which makes the rotation of wheel uniform and maintains its rotation.

Question 17.
The handle of a hand pump is made long, why?
Answer:
Long handle increases the distance between the piston and the force, thus the torque increases, so less force is required to pump the water.

Question 23.
What is moment of couple? Write its SI unit and dimensional formula. Write the factor on which it depends.
Answer:

The product of a force and the perpendicular distance between the line of action of forces is called moment of couple.
Moment of couple = Force × Couple arm
Unit: Its S.I. unit is N × m.
The factor it depends are :

Question 26.
A dancer is rotating with stretched hands, when the closes her hands, her speed of rotation increases. Why?
Answer:
We know that in the absence of external force the angular momentum of a rotating body is conserved and is equal to Iω. When the dancer closes her hands, her moment of inertia I decreases hence ω i.e., angular velocity increases.

Question 29.
Is centre of mass a reality?
Answer:
No, it is only a mathematical concept.

Question 30.
It is difficult to open the door by pushing it or pulling it at the hinge. Why?
Answer:
Because at the hinge the distance of the point of application of the force from the axis of rotation is negligible, so the torque is very small.

Question 31.
Why a helicopter must necessarily have two propellors?
Answer:
If there were only one propellor in the helicopter, then it would have to turn in the opposite direction to conserve its angular momentum. 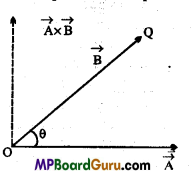 Question 2.
Show that the area of the triangle contained between the vectors  \(\vec{a} \text { and } \vec{b}\) is one half of the magnitude of a× b.
Answer: 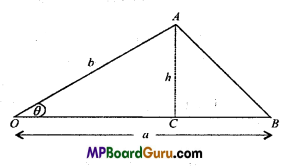 Question 3.
Give the location of the centre of mass of a
(i) sphere
(ii) cylinder
(iii) ring and
(iv) cube each of uniform mass density. Does the centre of mass of a body neccessarily lie inside the body?
Answer:
C.M. lies at the :
(i) Centre of sphere.
(ii) Mid-point of axis of symmetry of the cylinder i.e., its geometrical centre.
(iii) Centre of ring.
(iv) Point of intersection of diagonals i.e., at its geometrical centre.

No, in some cases, C.M. of a body like ring, hollow cylinder, hollow sphere and hollow cube etc. may lie outside.

Question 9.
Derive an expression for the moment of inertia of a rigid body.
Or
Prove that I = Σ mr2.
Answer: 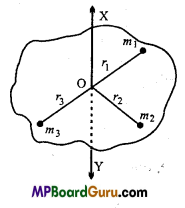 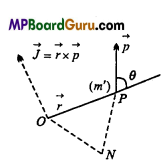 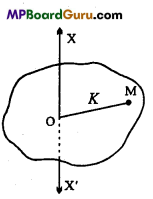 Question 16.
Derive an expression for the K. E. of a rotation.
Or
Prove that the kinetic energy of rotation of a rigid body =\(\frac{1}{2}\)ω2, where I is moment of inertia and co is angular velocity.
Or
Define the rotational kinetic energy and derive its formula.
Answer:
Let a body is rotating about an axis XY, with an angular velocity ω. The body consists of number of particle and angular velocity of each particel will be same. But the distances of all the particles are different, therefore each particle will have different linear velocity.
Let the distances of the particles of masses m1m2m3are r1, r2, r3,…. and their
linear velocities are v1 v2, v3,…. respectively.
Then, K.E. of particles will be 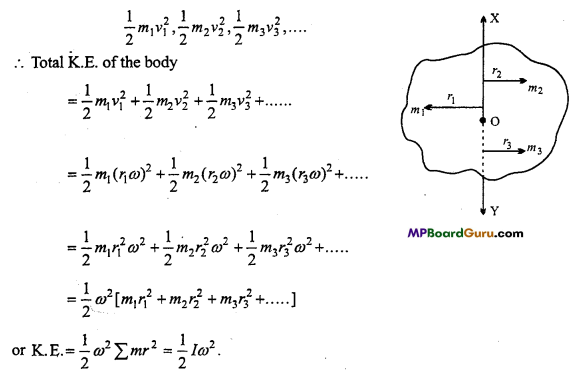 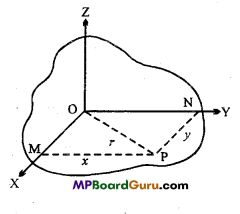 This threorem is true for all types of bodies. The solid body is divided into laminas and the theorem can be applied.

Question 2.
State theorem of parallel axes and prove it. Is it applicable for all the bddies?
Answer:
Parallel axes theorem :
According to this theorem, the moment of inertia of a body about the given axis is equal to the sum of the moment of inertia of the body about an axis through the centre of mass and parallel to the given axis and the product of the mass of the body and the square of distance between the two axes. 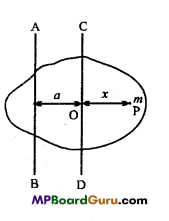 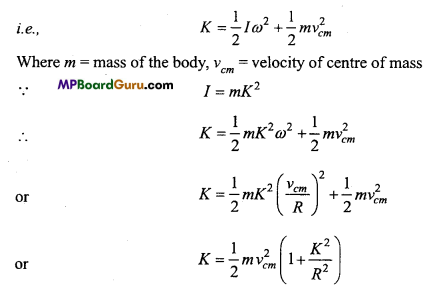 The above formula is applicable for cylinder, disc and sphere.

Question 1.
Two circular disc made of different metals having same mass and diameter dA and dB (dA > dB). If the moment of inertia about the axis perpendicular to its plane and passing through its centre is IA and IB. Find which is more IA or IB ?
Solution:
Let the mass of each disc b e‘m’ and radius be rAand rB.

If the thickness of the disc is ‘t then 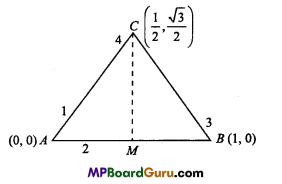 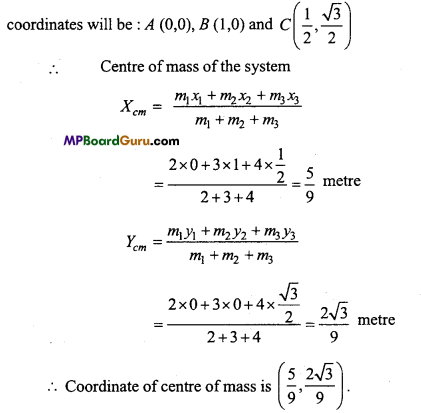 (b) The moment of inertia of disc about its diameter 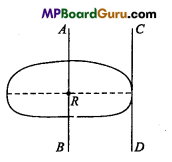 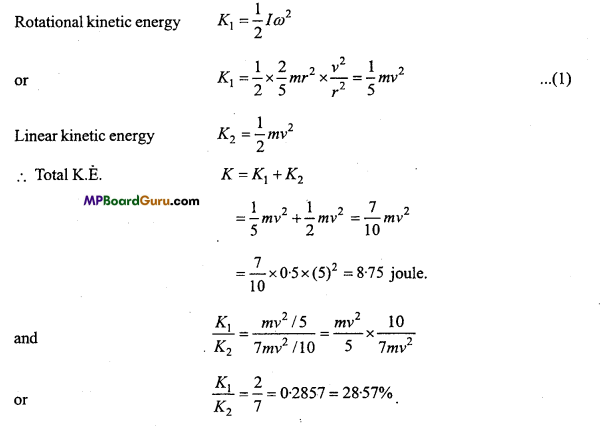 Question 20.
A ball tied with a string takes 4 second for one revolution rotating in cicular path. If the radius of the circular path is made half, then what will be the time taken by the ball to complete one revolution.
Solution:
By the laws of conservation of momentum
= I1 ω1 = I2 ω2
Let the mass of the ball be ‘wi’ and radius be ‘r’.
Then, I1 = mr2 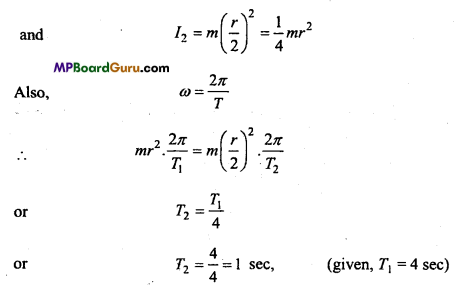 Question 1.
In rotational motion, moment of inertia has the same importance as the physical quantity in linear motion :
(a) Velocity
(b) Acceleration
(c) Mass
(d) Force
Answer:
(c) Mass

2. If the axis of rotation changes, then its ………………… also changes.
Answer:
Moment of inertia

3. The rate of change of angular velocity is called ………………..
Answer:
Angular acceleration

5. The angular momentum of a body is …………….. the product of its mass and areal
velocity.
Answer:
Twice

4. Write true or false:
1. If two particles have equal mass, then their position of center of mass is at the center of the line joining them.
Answer:
True

2. If internal force acting on a system is zero, then its momentum will be zero.
Answer:
False

3. If no entemal force acts on a system, then the velocity of its center of mass will remain constant.
Answer:
True

4. During motion, the volume or shape of a rigid body may change.
Answer:
False

5. The center of mass always lies inside the body.
Answer:
False

6. According to theorem of parallel axis for moment of inertia I = Io + Ma2 where symbols used have their, usual meanings.
Answer:
True