Are you seeking for the Madhya Pradesh Board Solutions 10th English Chapter 18 The Bridge Builder Questions and Answers PDF? If yes, then read this entire page. Here, we are giving a direct link to download MP Board Class 10th English Solutions Questions and Answers PDF which contains the chapter wise questions, solutions, and grammar topics. You can also get the shortcuts to solve the grammar related questions on this page.

Question I.
Note down the different meanings of the word ‘Bridg& in your notebook and use them in your own sentences.
Answer:

II. Words beginning with ‘ch..’ may have different sounds In pronunciation, e.g., character and chair. Make a list of such words, 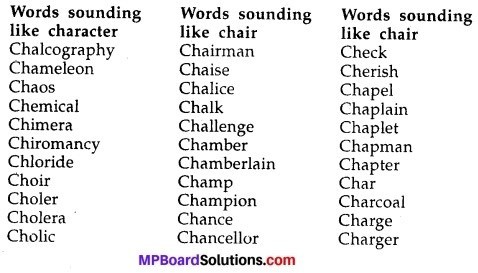 A. Answer the following questions in about 25 words.

Question 4.
What did the oldman tell his fellow pilgrim?
Answer:
The old man told his fellow pilgrim that a youth was following him. While travelling in the twilight he might slip his feet and fall into the pit. Therefore, he was building the bridge for his safety.

B. Answer the following questions in about 50 words.

Question 2.
Explain: The old man crossed in the twilight dim;
The sullen stream had no fears for him;
But he turned, when safe on the other side,
And built a bridge to span the tide.
Answer:

Choose your partner and go ahead with the pair-activity given below:
Mohan—I know it’s not lunch time yet but 1 am really hungry.
Sarah—It’s only eleven and you have already had two coffees since breakfast.
Mohan—Those samosas are still hot. May I have one?
Sarah—Oh, yes, you can, but it’s already served to other friends.
Mohan—It’s not late yet. I can join them.
Sarah—Yes, you still have a choice.
Mohan—They have not finished it yet.
Sarah—They are slow eaters they are still having their snacks.
Specially notice the use of yet, still and already. Practise the conversation with the help of your partner. Switch over the role and practise more.
Answer:
Nikunj—You are not yet ready and the bus driver is sounding the horn.
Mukul—I have already sent him the message to wait for me just for two minutes.
Nikunj—There is still one seat vacant in the bus.
Mukul—Oh no, it is already reserved for a senior citizen.
Nikunj—It is not late yet. I can attend the meeting.
Mukul—Yes, you still have your option.
Nikunj—They have not got degrees yet.
Mukul—They are slow readers. They are still preparing for the test.
Switch over the role and prectise further yourselves.

Question 1.
Suppose you meet a stranger who needs your help. Will you help him and how far? (50 words)
Answer:
Strange are the ways of the world. Some strangers exploit the situation and cause harm to the helper. If you give shelter to a person in your house for the night he might injure and rob you. If you give a lift to a stranger, he might land you in trouble. Some motor cyclists enquire about some addresses and speed away with the chains, necklaces and earrings. If I meet a stranger who needs my help, I shall keep him at an arm’s distance. I shall only help him to the extent that he does not endanger my safety.

Question 2.
What is the importance of a role model in life? Who is your role model and why? (150 words)
Answer:
A role model is a person who may be taken as an example to be copied. A role model plays a vital role in one’s life. He directs, guides and channelizes one’s course of life. My grandfather is my role model. He was a successful teacher before his retirement. He has an appreciable command on English, Hindi, Urdu and Sanskrit. His ideas serve as a source of inspiration to me. He has authored many books.

His simple living, high thinking, magnetic personality and noble sentiments have made me his fan. He is always cheerful and has an optimistic outlook on life. He is a renowned scholar and eloquent speaker. He has contributed a lot in my all round development. He has taught me the value of work, discipline and character and how to make the best use of time by doing the maximum in minimum time. He has taught me the art of living by facing all odds in life.

1 . Where the vision is one year, cultivate flowers.
2. Where the vision is ten years, cultivate trees.
3. Where the vision is eternity, cultivate people.
Think and elaborate.
Answer:
We make provision keeping the time factor in view. If we intend to travel for a day we travel light. We take many items with us if we travel for a longer period. Similarly, we take all the items of household and other requirements if we settle somewhere for years. We develop the friendship with our neighbours and others if we intend to live at some place forever. Flowers grow in an year and trees start giving fruits and shade in a decade. Friends are needed during life and even after death. A circle of friends and companions is the life long need of a man. He who wins others’ hearts remains victorious in life.

Albert Einstein said, “Try not to be a man of success but rather try to be a man of value..”
Who makes society more livable? Men of success or men of value? Ponder and pen your thought.
Answer:
Some people achieve success by fraud and fraudulent means. Such success is not praiseworthy. Gandhiji was of the opinion that both means and ends should be good. The cruel emperors seek victory by killing innocent people. That victory is not creditable. Ashok learnt a bitter lesson. He noticed the defeat of his morals in his victory in war. Failures are not the curses of fate. Sincere people meet failure after failure but they never lose their values. Men of value make society more valuable. Gandhiji grabbed freedom from the cruel rulers by virtue of the weapons of truth and non-violence. Sincerity, truth and courage make one a man of value.

Collect information about great personalities of the following fields:
1. Science and technology
2. Social reforms
3. Sports and games
4. World peace and environment.
Collect photographs of those greatmen if possible, and keep the record as a project work.
Answer:
For self-attempt.

A. Read the stanzas and answer the questions that follow:

1. The old man crossed in the tunlight dim;
The sullen stream had no fears for him
But he turned, when safe on the other side,
And built a bridge to span the tide. (Page 151)

(b) The word used for ‘a device that connects two sides of road over a river’ in the above lines is
(i) bridge
(ii) stream
(iii) tide
(iv) side
Answer:
(i) bridge

2. The builder lifted his old ‘gray head:
“Good friend, the path I have come,” he said,
“There folloioeth after me today
A youth, whose feet must pass this way. (Page 152)

(b) The word used for ‘one who builds something’ in the above extract is
(i) builder
(ii) friend
(iii) youth
(iv) feet
Answer:
(i) builder

B. Short Answer Type Questions (In about 25 words)

Question 1.
What is the world of today replete with?
Answer:
The world of today is called the Kaliyug. Most of the people are mean, greedy, of loose morals and insincere. They are after grinding their own axes by hook or by crook. They are least concerned with others’ weal, woe or welfare.

Question 2.
How was the old pilgrim different from his fellow pilgrim?
Answer:
The old pilgrim had crossed the chasm safely. But he was concerned for the safety of a young and inexperienced youth who was following him. So, he built a bridge over the chasm for his safety. The fellow passenger was of individualistic views. He asked the old man not to waste his energy in building the bridge.

Question 3.
How was the old man’s action different from the actions of the people in general?
Answer:
The old man had built a bridge over a vast, deep and wide chasm. His journey had ended and he would never again pass that way. It was quite an unselfish act. The people in general have no concern for the sufferings of others. They sometimes dig pits for others.

Question 1.
Give the substance of the poem ‘The Bridge Builder’.
Answer:
‘The Bridge Builder’ is a story in rhyme. It narrates the story of an old man. He had crossed a vast, deep and wide chasm fearlessly. He would never come back on that path again. But he was concerned about the safety of a young man. The sullen stream might prove a pitfall for the inexperienced traveller. A fellow pilgrim advised him not to waste his energy. He did not heed to his advice and achieved his objective. We need more people like the old gentleman.

The Bridge Builder Summary in English

An old man was going alone on the highway. In the evening he crossed a vast, deep and wide chasm fearlessly and safely. But he was concerned about the safety of a young and inexperienced youth who was following. He suspected that the chosen path could prove a pitfall for the young traveller. So he built a bridge and spanned the tide.

The Bridge Builder Summary in Hindi 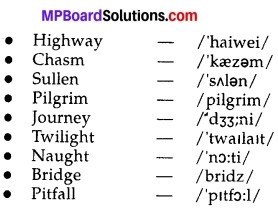 Hope that the above shaped information regarding the Madhya Pradesh Board Solutions for 10th English Chapter 18 The Bridge Builder Questions and Answers is useful for making your preparation effective. View our website regularly to get other subjects solutions.