Students get through the MP Board Class 11th Biology Important Questions Chapter 1 The Living World which are most likely to be asked in the exam.

Question 2.
What are Autotrophs?
Answer:
Organisms which can produce own food by photosynthesis are called as Au-totrophs.

Question 4.
What is species?
Answer:
Group of similar interbreeding organisms are called as species.

Question 4.
On the basis of which of the following you will like to classify the people you meet:
Dress, Mother tongue, State where they live, Economic standard etc.
Answer:
First of all we classify the people we meet on the basis of their mother tongue, then the state where they live, at the end their dress, religion, species and physical appearance is considered.

Question 5.
What Knowledge we gain by identification of Individual and Population?
(NCERT)
Answer:
By identification of individual and population we can understand about inter-relationship between all organisms. It helps to understand about similarity and dis-similarity between living organisms.
e.g., There are two different species of potato :
Genus – Species
Solarium – tuberosum
Solanum – nigrum.

Question 6.
Define Taxon. Give some examples of taxa in hierarchical classification.
Answer:
Taxon is a group of living organisms. Each taxa is placed at some level of hierarchy.
e.g., Insect represent a class of phylum Arthropoda. Presence of three pairs of jointed legs is the similar characteristic of insects.
Example of Taxa are various categories such as kingdom, phylum, class, order, family, genus and species, which altogether forms hierarchic classification.
Modern Taxa or Classification of Man :
Kingdom – Animalia
Phylum – Chordata
Class – Mammalia
Order – Primates
Family – Hominidae
Genus – Homo
Species – sapiens.

The generic name is always capitalized while specific name is written in small letters, e.g., the zoological name of frog on the basis of this system is Rana tigrina. Here Rana indicates generic name while tigrina indicates its specific name. Binomials when written should always be underlined and when printed they must be italicized.

The body of well developed organism is formed from a single cell, various changes occur in the cell and finally it is developed into an organism. The first unicellular organism is evolved on the earth like that of above process, then various changes occurred according to environment thus, various species evolved. In this phylogenic line organisms of kingdom monera appeared for the first time, from which protists have evolved. The kingdom plantae, animalia and fungi evolved from kingdom protista in various lines.

Question 11.
Write the name at least two examples of five kingdoms of organism.
Answer:
Five kingdoms as proposed by Whittaker are as follows :

Question 12.
Write down the utility of systematics.
Answer:
Utility of Systematics :

Utility of two kingdom classification are :

(b) Differences between Autotroph and Heterotrophs

(c) Differences between Plantae and Fungi

Question 15.
Define the following :
(i) Systematics,
(ii) Taxonomy,
(iii) Classification,
(iv) Identification,
(v) Nomenclature.
Answer:
(i) Systematics : It is a discipline which deal with the kinds and diversity of all organism and the existing relationships among themselves.
(ii) Taxonomy : It is the study of all plants and animals, their identification and classification.
(iii) Classification : It is defined as a system of arrangement of organisms into groups showing relationships.
(iv) Identification : It refers to the determination of correct position by an organism in the plan of classification.
(v) Nomenclature: It is the process of giving scientific names to the plants and animals.

Question 16.
What do you understand by trinomial nomenclature?
Answer:
Trinomial nomenclature :
Sometimes organisms of same species differs from each other as they are adapted for different kinds of environment. In such cases species are again divided into subspecies. The scientific name of such organisms consists of three words. The first word indicates generic name and begins with first letter as capital. The second word is species name and begins with first letter as small and the third word is the subspecies name which also begins with first letter as small. The system of naming the organisms using three words is called as Trinomial nomenclature. For e.g., the species of crow of different places are named as follow :

Question 1.
What is Hierarchial System of classification? Explain it briefly.
Answer:
The term ‘Hierarch’ means a series of succession of different ranks. In biological classification, hierarchy is a system of arrangement where taxonomic categories are placed in order of logical sequence. There are seven hierarchies of categories or group in ranks which are placed one upon another and any species can be traced to these seven basic categories.

Question 2.
Write down the outline of Five Kingdom Classification giving two examples of each? Also give the advantages of it.
Or
Write the name and one important basic features of five kingdom which proposed by Whittaker.
Answer:
Five Kingdom classification : It is divided into five groups, they are :

Question 4.
Collect all modern meaning of word ‘Species’. Can you discuss with your teacher to know about species of higher category of plants, animals and bacteria ?
(NCERT)
Answer:
The ‘Species’ was used for the first time by John Ray. According to him, Species is a population of individual having common gene pool. According to Mayer (1942), Species is group of inbreeding population. According to modem concept, the group of individuals having the following characteristic features is called a species:

Examples of Species of higher category plants are :
Mangifera indica (Mango), Solarium tuberosum (Potato) and example of higher category animals are : Panthera leo (Lion), Panthera tigris (Tiger), Eliphas indicus (Elephant). First word of all above examples are Generic name whereas second word of all above scientific names are species name. Such as indica for mango, tigris for tiger.

Whereas bacteria are classified into different groups on the basis of their shapes such as : Coccus (Spherical), Bacillus (Rod shaped), Vibrio (Comma shaped), Spirillum (Spiral shaped).

Question 5.
How key is useful to identify and classify living organisms?
Answer:
Following classification and nomenclature a taxonomist constructs a key to make it possible for other biologists to identify the species. A Key is a device by which each type in a group of organisms can be identified. A key provides convenient way for easy identification of an organism by applying diagnostic characters. There are two types of keys: (i) Biforked key, (ii) Bracketed key. An example of a key to identify a fish, frog, snake, bird, bat and cat is given below:

Question 6.
Explain following terms and define them :
(i) Phylum,
(ii) Class,
(iii) Family,
(iv) Order,
(v) Genus.
Answer:
(i) Phylum :
A group of one or more classes having certain common diagnostic characters but differ from other classes of other phyla in some diagnostic characters is called as Phylum.
e.g., Phylum Chordata includes classes pisces, amphibia, reptilia, aves and mammalia.

(ii) Class :
It consists of one or more orders having certain common characters which differs from order of other classes in some characters is called as class.
e.g., Class Mammalia includes orders primates (gorilla, man), carnivora (dogs, cats, lions) etc.

(iii) Family :
It is the taxonomic category containing one or more related genera having certain common characters, which is separated from other related families having certain different characters.
e.g., Family Felidae includes lion, leopard, tiger etc.

(iv) Order :
It consists of one or more families having certain common characters which differ from families of other orders in some diagnostic characters.
e.g., the order carnivora includes the Families Felidae (lion, leopard, tiger) and Family Canidae (dogs, foxes).

Question 7.
Explain taxonomic hierarchy by giving examples of plants and animals.
Answer:
In classification plants and animals are placed in various smaller and large groups. These groups are called as taxon and category. Hierarchy is a system of arrangement for classification in which taxonomic categories are placed in a subsequent way on the basis of characteristics and evolution of the organisms.

The hierarchy of categories consists of a descending sequence of seven categories, which are Kingdom, Phylum, Class, Order, Family, Genus and Species. 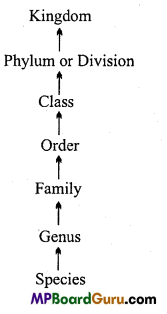 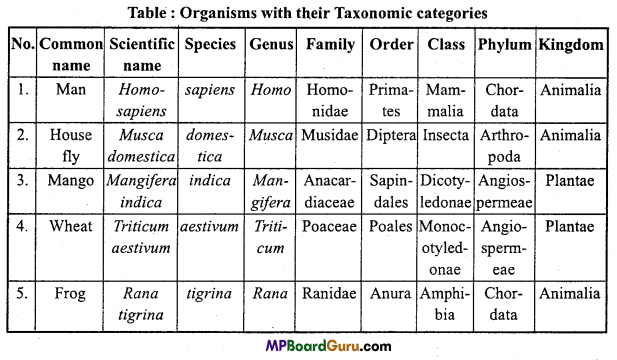 Question 4.
Which of the following is most primitive vascular plant:
(a) Red algae
(b) Fern
(c) Brown algae
(d) Lichens.
Answer:
(b) Fern

Question 5.
Basic unit of modern classification is :
(a) Species
(b) Genus
(c) Both
(d) None of these.
Answer:
(a) Species

Question 9.
Where sample of plants are collected :
(a) Herbarium
(b) Museum
(c) Botanical garden
(d) None of these.
Answer:
(a) Herbarium

Question 17.
According to Binomial nomenclature name of any organism consists of:
(a) Three words
(b) Two words
(c) Five words
(d) One word.
Answer:
(b) Two words

2. An intermediate category between genus and order is ………………
Answer:
Family

5. The artificial system of plant classification was proposed by ……………..
Answer:
Linnaeus

6. In biology the Binomial nomenclature were proposed by …………………..
Answer:
Carolus Linnaeus

4. Who is known as father of classification ………………….
Answer:
Carolus Linnaeus

(A) Match the following :

1. Homo sapiens is the classification of cow.
Answer:
False

5. Genus is the group of interrelated species.
Answer:
True

7. Phylum is the group of similar classes.
Answer:
True

7. Study of evolutionary history of an organism.
Answer:
Phylogeny