Question 1.
How will you describe the position of a table lamp on your study table to another person?
Solution:
Consider the lamp as a point and table as a plane. Choose any two perpendicular edges of the table. Measure the distance of the lamp from the longer edge, suppose it is 25 cm. Again, measure the distance of the lamp from the shorter edge, and suppose it is 30 cm. You can write the position of the lamp as (30, 25) or (25, 30), depending on the order you fix. 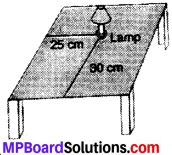 Question 2.
(Street Plan):
A city has two main roads which cross each other at the center of the city. These two roads are along the North – South direction and East – West direction. All the other streets of the city run parallel to these roads and are 200 m apart. There are 5 streets in each direction. Using 1 cm = 200 m, draw a model of the city on your notebook. Represent the roads/streets by single line. 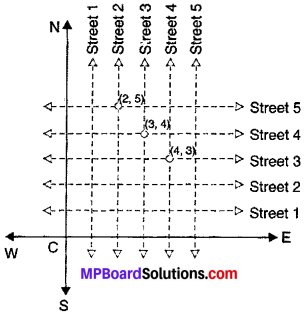 Solution:
Both the cross-streets are marked in the figure given. They are uniquely found because of the two reference lines we have used for locating them.

Cartesian Coordinate Axes:
These are two mutually perpendicular reference lines shown in Fig. which locate a point is a plane. 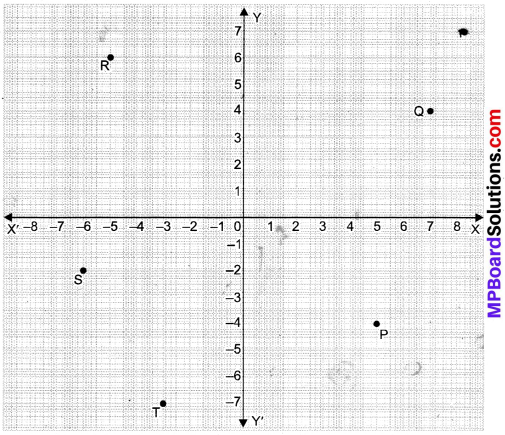 Convention of Signs:
OX is the positive direction and OX’ is the negative direction of x – axis while OY is positive and OY’ is negative.
In other words,

On the Y – axis:
Values above are positive and those below are negative.

Cartesian System:
The system used for describing the position of a point in a plane is called the Cartesian system.

Origin:
The point at which the two coordinate axes meet is called the origin. when a point is in 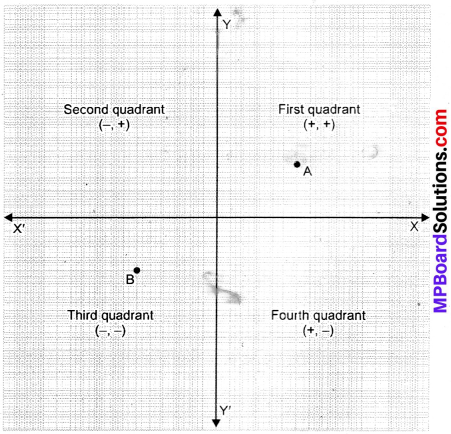