Choose the correct option of the following

Mp Board Class 8 Social Science Solution Chapter 7 Question 1.
By which process the materials of broken rocks assemble at its original place
(a) Weathering
(b) Transportation
(c) Erosion
(d) Deposition
Answer:
(a) Weathering

Mp Board Class 8 Social Science Chapter 7 Question 2.
Where among the following winds perform its work?
(a) In deserts
(b) In Mountains
(c) In coastal areas
(d) In plains
Answer:
(a) In deserts

Mp Board Class 8 Science Solution Chapter 7 Question 3.
What is estuary?
Answer:
Some of the rivers become wider at their meeting point with sea and sweep away into deep sea.

Social Science Class 8 Chapter 7 Question 4.
What is geyser?
Answer:
The underground hot water is thrown up in the form of fountain is called geyser. 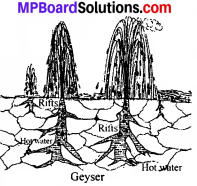 Question 5.
How is the Yardage formed?
Answer:
Yardage is formed by wind erosion.

Question 6.
What is Lagoon?
Answer:
The sea water enclosed between the coast and sand bar is known as lagoon.

Question 1.
Write the factors that help soil formation?
Answer:
The weathering and erosion process of rocks from the soil. The helping agents in soil formation are parent rocks, surface shape, climate & vegetation.

Question 2.
What is weathering? Write the names of different types of weathering?
Answer:
Weathering is the iocal process in which graduation and split of rocks occur at their original place. The types are physical, chemical and biological weathering.

Question 3.
Differentiate between slow and rapid wasting?
Answer:
The process of surface sliding by weathering is slow wasting and the process of filling up the holes is high wasting.

Question 5.
What are Moraines? Write its types?
Answer:
When the glacier melts, it starts depositing the sediments in different parts of the valley. The land form made is Moraines. The types are Lateral, Medial and Terminal moraines. 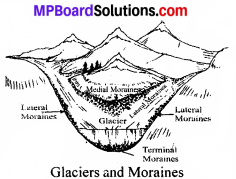 1. Slow wasting:
The rapid erosion cycle shifts the rocks from its original place by rubbing, cut-ting & peeling to decrease the high elevated areas.

Question 2.
What is soil erosion? Write its cause and ways to conserve soil?
Answer:
The natural forces or human activities which help in removing the layer of soil is called soil erosion. The causes of soil erosion are as follows:

The measures to conserve soil are:

Sand Dunes:
When some obstacle comes in the path of the sand laden wind the deposition of sand forms a dune hill which has a crest.

Loess:
Fine particles of the sand are suspended in wind. They are carried over long distance and gets deposited as Loess.

Question 4.
What is glacier? Write about glacier types with example.
Answer:
A river of moving ice is called glacier. It creeps down a valley from a snowfield above the snow line. It moves under the influence of gravity. On the basis of origin and situation glaciers can be divided into two groups.

1. Continental glacier:
These are permanent sheets of ice and snow that covers extensive land surfaces. These exist in Greenland and Antarctica.

2. Valley glacier:
These are formed in high mountains and are usually long and narrow as they occupy valleys of former streams. The biggest valley glacier is Siachen glacier.

The erosion work of ground water can be classified into two parts:

The land forms created on the surface are lapses and sink hole. The underground land form includes caves, stalactites stalagmites. 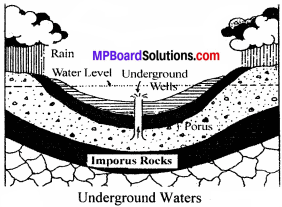