Choose the correct option of the following Questions

Mp Board Class 8 Social Science Solution Chapter 14 Question 1.
For which crop the plain of Prairies are called the bucket of breads
(a) Rice
(b) Maize
(c) Wheat
(d) Barley
Answer:
(c) Wheat

Mp Board Class 8 Social Science Chapter 14 Question 2.
Which of the following is known for car industry?
(a) Chicago
(b) Detroit
(c) Pittsburgh
(d) New York
Answer:
(b) Detroit

Question 4.
What are the modes of transportation in North America? How long their expanse is:
Answer:
North America has a very well – developed transportation system. It possesses a dense network of roads and railways. Coastal and inland Water- ways continue to be the bulk carriers. Four vehicles run simultaneously in one direction. Cars are most popular mode of transport here. North America has an extensive and efficient network of railways. There are three inter-continental rail routes.

Question 1.
What are the causes of agricultural progress in North-America?
Answer:
North America is very rich in agricultural production. This is mainly because the continent is vast and possesses very fertile plains, suitable climate and sufficient water is available for irrigation. Crops are two types:

Extensive Prairies grasslands in the central and the river valleys are suitable for farming. Extensive agriculture is the chief farming practice. There are big fields and big machines are used for farming. New scientific techniques is used for farming. Use of fertilizers and latest quality seeds are the causes of agricultural progress in North America.

Question 2.
Write the reasons why there are thick population in the eastern part of North America?
Answer:
The total population of North America is 51 crore 40 lakhs. The density of population is 21 person per square kilometers. The distribution of population is not even everywhere. The most thickly populated parts of North America are on the north – eastern coastal lands and the areas around the Great Lakes. Most of the big cities of the continent are located in these areas. This region enjoys the moist cool climate and has adequate power resources and many industries.

Question 4.
Why North America is so advance continent?
Answer:
The reasons of being North America an advanced continent are as follows:
It has extensive natural resources. It has fertile land which is a source of rich crops. It has immense mineral wealth. Its industries are highly advance. Means of transport are unique in the world. It has economic relations with most of the countries of the world. It has atomic power and well trained forces also. So we can say that North America is a advance and developed continent. 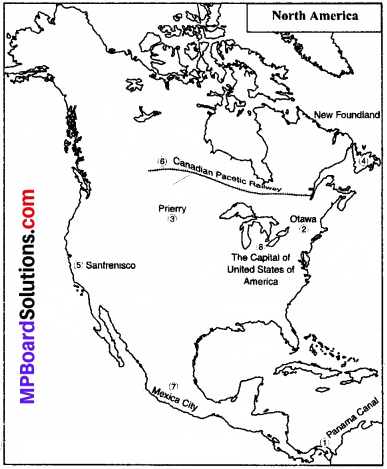