Get Updated MP Board Solutions for Class 7 Special English Solutions Chapter 4 The Wheat is Cheaper-II Questions and Answers in PDF Format and download them free of cost. These are provided as per the latest exam pattern and syllabus. Access the topics of Chapter wise and communication skills, grammer part through the direct links available depending on the need. You can Download MP Board Class 7 English Solutions and can score highest grade in examination. Clear all your queries on the Mp Board Solutions for Class 7 English Chapter 4 The Wheat is Cheaper-II Questions and Answers Subject by using the Madhya Pradesh State Board Solutions for existing.

If you are eager to know about the Madhya Pradesh State Board Solutions for Class 7 English you will find all of them here. You can identify the knowledge gap using these MP Board Solutions for English PDF and plan accordingly. Don’t worry about the accuracy as they are given after extensive research by people having subject knowledge along side from the latest English Syllabus.

A. Answer the questions given below:

Class 7 Chapter 4 English MP Board Question 6.
How much money did he pay to the farmer?
Answer:
He paid rupees seventy five to the farmer. It was the price of 75 kilos of wheat.

English Chapter 4 Class 7th MP Board Question 7.
Who do you think was clever’ the merchant or fee farmer?
Answer:
The farmer was cleverer of the two.

B. Read the following sentences and tick true or false.

A. Fill in the blanks using the words given below:
(Saddle, admired, sore, grain, sprouted, hire, reap, starving, begged, neighbouring, his)

A. Frame questions for the following answers using what, when, how, who, why.

ii. …………
Answer:
The farmer found that the horse had a sore on its back.

iii. ………….
Answer:
He begged him to give him seventy- five kilos of wheat.

iv. …………..
Answer:
Your father owes seventy kilos of wheat to my father even to this day.

v. ……………
Answer:
The merchant began running his thumb up and was calculating.

Answer:
(i) Who used to go on his horse to the market?
(ii) What did the farmer find on the horse’s back.
(iii) Who begged him to give him seventy- five kilos of wheat.
(iv) What does my father owe to your father to this day?
(v) Why did the merchant begin running his thumb up and calculating?

Discuss in groups about the famous Indian freedom fighter Bhagat Singh and find answers to the following questions.

Read the information given in the table and write three sentences about each freedom fighter.
Example:
(1) Mahatma Gandhi was a freedom fighter
(2) He was born in Porbandar.
(3) He started Non-violence and Quit India movements. 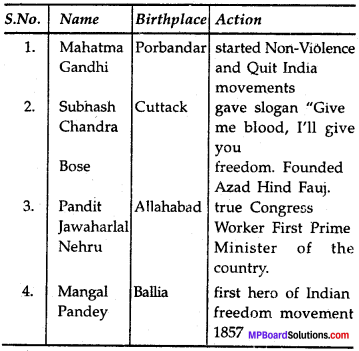 Answer:
1. Mahatma Gandhi :
Mahatma Gandhi was born at Porbander. He started Non-Violence and Quit India movements. We call him ‘Bapu’. He was the liberator of India.

4. Mangal Pandey :
Mangal Pandey was born at Ballia. He was the first hero of Indian freedom movement of 1857. He lost his, life for the nation It was a great sacrifice!

The Wheat is Cheaper-II Word Meanings

We believe the information shared regarding MP Board Solutions for Class 7 English Chapter 4 The Wheat is Cheaper-II Questions and Answers as far as our knowledge is concerned is true and reliable. In case of any queries or suggestions do leave us your feedback and our team will guide you at soonest possibility. Bookmark our site to avail latest updates on several state board Solutions at your fingertips.