Choose the correct alternative from the following:

Answer the following in brief:

Question 1.
Write the names of the important rulers of the Chouhan dynasty.
Answer:
Ajayraj Chouhan and Prithiviraj Chouhan.

Question 2.
Write any three features of the Chola administration.
Answer:

Question 3.
What do you understand by Secularism?
Answer:
Secularism means that from point of view of the government all religious are equal and the state shall not discriminate between the people of different facilities.

Question 4.
Write any three qualifications required to be a member of the RajyaSabha.
Answer:
A person must be 30 years or above in age.

Question 5.
What do you know about die Ionosphere?
Answer:
It is one of the layers of gases found in thermosphere. It is found at a height of 80 to 400 km from the earth.

Question 7.
What is meant by change of season?
Answer:
Because of the title of the earth’s axis one hemisphere comes to face to the sun first and then comes the other hemisphere. Therefore variations in the weather phenomenon occur. Change in temperature is die bases for change in seasons. The earth gets heat from sun. Due to its tilt of 23\(\frac { 1 }{2 }\)° degrees on its axis and its revolution round the sun the quantity of temperature received differs. This brings about changes in seasons.

Question 8.
Which season does India experience when die sun is directly on the tropic of Cancer?
Answer:
Summer season.

Answer the following questions in detail:

Question 1.
Describe die political condition of India in the beginning of the early part of the medieval period.
Answer:
The Arabs made great contribution in the development of the Medieval civilization. They were expert traders. Trade had made them rich and they used the wealth for the development of art, science and literature.

They spread knowledge, which they acquired from the countries with which they had trade relations, to distant lands. They also made important contribution in the field of Geometry, Algebra, Geography and Astronomy. They also carried new inventions of China like Gun Powder, Paper and Compass to countries of Europe.

Question 3.
Describe the freedoms given in the Rights to freedom.
Answer:
Right to freedom guarantees six basic freedoms. Two freedoms are given here:

Question 4.
Explain the process of framing a law.
Answer:
Every bill has to go through three stages in the Parliament. These stages are:

2. Stratosphere:
The second layer of the atmosphere is known as stratosphere. The temperature in this layer is constant till 20 kms. height and then slowly increases.

3. Mesosphere:
The height of this layer is 50 to 80 km from the sea level. The variation in temperature is less in this layer as water vapor, clouds and dust are found less and fast wind blows here. 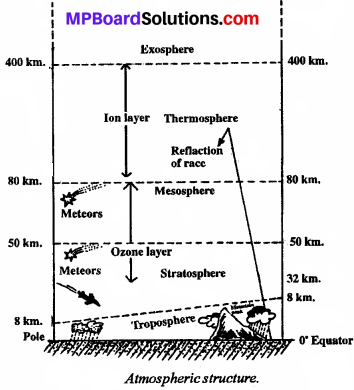 4. Thermosphere:
The thermosphere starts from the height of 80 km from sea level. The density of air is very less in this layer. The
temperature increases with height in this layer. Two layers of gases are found here. One is the ozone layer and the other is the ion layer.

5. Exosphere:
This is the outermost layer of die atmosphere the upper limit of this layer is uncertain. The density of air is the least here.

Question 6.
Describe the different types of permanent winds.
Answer:
Winds are the natural horizontal movement of air over the earth’s surface.

Difference between air and wind:

Question 7.
Explain with the help of a diagram the changing seasons of the earth.
Answer:
The earth’s axis forms an angle of 66 \(\frac { 1 }{2 }\) with the plane of the earths orbit and the earth tilts at 23 1/2 degree on its axis. Let us understand how seasons occurs on earth. 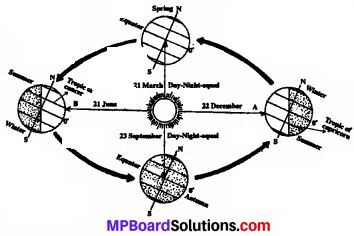