Choose the Correct answer from the given alternatives:

Mp Board Class 7th Social Science Chapter 2 Question 2.
Which ruler of the Rashtrakuta dynasty built the Kailasha temple at Ellora?
(a) Krishna – I
(b) RajaDhruva
(c) Krishna – II
(d) Rayendral
Answer:
(a) Krishna – I

Fill in the blanks with appropriate words given in the brackets:

Mp Board Class 7 Social Science Project Work
On an outline map of India show the capitals of the various dynasties of South India.
Answer: 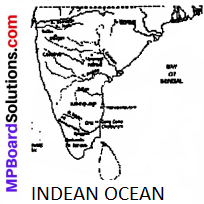