Choose the correct alternatives from the following

Humidity And Rainfall Class 7 MP Board Question 1.
What are water vapors?
Answer:
When very small particles of water are converted to gaseous water molecules are called water vapor.

Chapter 18 Class 7th Science MP Board Question 2.
Why does evaporation increase and decrease?
Answer:
The change in temperature brings about a change in evaporation. The rate of evaporation is more when strong winds blow.

Social Science Class 7 Chapter 18 MP Board Question 3.
Why are clouds formed?
Answer:
The vapor that rises up from the water bodies reaches high up in the sky and is converted into droplets due to cooling. These droplets get dense and form clouds. When the clouds contain less water droplets it appears white and as its density increases it appears black.

Question 4.
How do you understand by snowfall?
Answer:
The water vapors on reaching higher up in the sky is converted into ice particles due to very low temperature. These ice particles are called snow. When this snow falls on earth it is called snowfall.

Question 5.
What is cyclonic rain?
Answer:
When the hot and cold air meet, the hot air rises upwards and the cold air rushes to occupy the low-pressure area in the center. As a result there is circular movement which causes the whirling air in the center to rise upwards. This rising air cools down, condenses and brings rain. This type of rainfall is called cyclonic rainfall.

Question 1.
What is condensation? what are its Various forms?
Answer:
The process in which water vapor in die atmosphere changes into minute dip pelts of water or ice crystals is called condensation. Its various forms are dew, frost, fog, smog and hails. 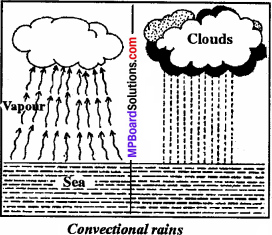 2. Orographic rain:
When a mountain range lies in the path of a Tain – bearing wind, it causes die wind to rise along its slope. As a result, it cools and gets saturated. Further cooling due to its ascent leads to rainfall. This is called orographic rain. The diagram of Orographic rain is given 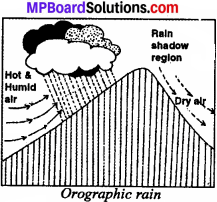 3. Cyclonic rain:
When die hot and cold air meet, the hot air rises upwards and the cold air rushes to occupy the low-pressure area in die center. As a result there is circular movement which causes the whirling air in the center to rise upwards. This rising air cools down, condenses and brings rain. This type of rainfall is called cyclonic rain.
The diagram of Cyclonic rain: 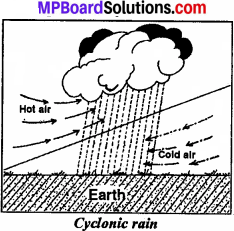 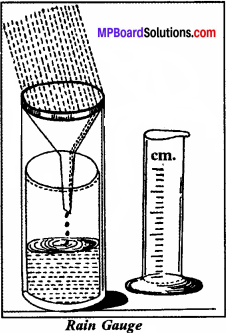 Question 4.
What is humidity? What are the different forms of humidity?
Answer:
The word humidity’ is used to denote die amount of dampness in die atmosphere. In other words the amount of water vapor present in the air is called humidity.

The different forms of humidity:
1. Clouds:
Clouds are formed due to the condensation of water vapor. As the moist air is lifted upwards, it clings to the dust particles in the air to form clouds.

2. Fog:
Fog, as a kind of cloud, is found on or near die surface of the land or water bodies. It is formed by the cooling of the air below its dew point in die lower layers of atmosphere.

4. Snowfall:
As condensation takes place at temperature below 0°C, the water-vapor in the atmosphere changes into millions of tiny crystals. Sometimes, they combine together to form flakes of snow. Coming down of these snowflakes to die ground from clouds is termed as snowfall.

5. Hail:
Hails are caused by the rapid ascent of moist air higher regions where temperature is far-below freezing-point This causes the raindrops to freeze. When the hailstones become so big and heavy that the air can no longer hold them, they fall from the cloud on the earth as hailstones.

6. Dew:
On a cold and clear nights moist air comes in contact with cold objects on the earth. The moisture in the air condenses into droplets of water. It is known as dew.

7. Frost:
Frozen dew is called frost In the case of frost, the dew point is or below freezing point 0° Celsius.