Question (b)
What is meant by Lithosphere?
Answer:
The realm of the earth consisting of rocks, stones and soil is called lithosphere.

Question (c)
What are mountains?
Answer:
Mountains are highly elevated lands with steep slopes. They are higher than the surrounding areas. They have high peaks and deep valleys.

Question (d)
Define Biosphere?
Answer:
The zone of island, water and air which contains all forms of life is called plain and a plateau.

Question 2.
Question (a)
What is lithosphere? Describe its different forms?
Answer:
1. The realm of the earth consisting of rocks, stones and soil is called lithosphere.

2. The small part of land surrounded by water are called islands and large masses of land are called continents. The surface of the land is not even.

3. Some parts are plain, others are rigid and some are very much elevated or too low. According to the shape of these parts, they are called mountains, plateaus and plains. These shapes are found in all the continents.

Question (b)
What is biosphere? How organisms depend on each other in the eco system?
Answer:
1. There is a very narrow zone on Earth where land, water and air come in contact with each other. This is called biosphere. All the living things such as plants, animals, and human being exist only in this zone (the biosphere). So biosphere is of great significance for all of us.

2. There are ten lakh species of animals in the animal kingdom. It includes microscopic organisms to large animals like the elephant and the whale fish.

3.The organisms in the animal kingdom move from one place to the other. Three lakh species of plants are found in the plant kingdom. It includes microscopic algae to large trees.

Question 3.
Give one term for the following:

Question 5.
Fill in the blanks:

Question 1.
Make clay models of mountain, plateau and plain?
Answer:
Please do with the help of your teacher.

Question 2.
Look at the oceans in a map of the world and write their names as per their size?
Answer:
Please do with the help of your teacher.

Question 3.
Show the following in the given map? 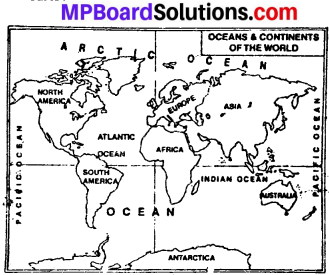