Question 1.
Fill in the blanks in the following:

Question 2.
State whether the following statements are True (T) or False (F):

Question 3.
It was observed that a pencil sharpener gets attracted by both the poles of a magnet although its body is made of plastic. Name a material that might have been used to make some part of it.
Answer:
Iron.

Question 4.
Column I shows different positions in which one pole of a magnet is placed near that of the other. Column II indicates the resulting action between them for each situation. Fill in the blanks.

Question 6.
Where are poles of a bar magnet located?
Answer:
On the two ends of the bar magnet.

Question 7.
A bar magnet has no markings to indicate its poles. How would you find out near which end is its north pole located?
Answer:
Take a bar magnet. Put a mark on one of its ends for identification. Now, tie a thread at the middle of the magnet so that you may suspend it from a wooden stand [Fig.]. Make sure that the magnet can rotate freely. Let it come to rest. Mark two points on the ground to show the position of the ends of the magnet when it comes to rest. Draw a line joining the two points. This line shows the direction in which the magnet Was pointing in its position of rest. Now, rotate the magnet by gently pushing one end in any direction and let it come to rest. Again, mark the position of the two ends in its position of rest. 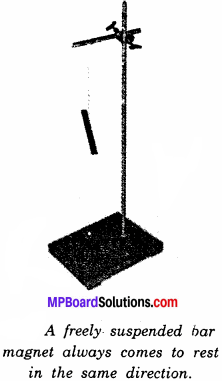 Question 8.
You are given an iron strip. How will you make it into a magnet?
Answer:
Take the iron strip and place it on the table. Now take a bar magnet and place one of its poles near one edge of the bar of iron. Without lifting the bar magnet, move it along the length of the iron bar till you reach the other end. Now, lift the magnet and bring the pole (the same pole you started with) to the same point of the iron bar from which you began (fig.) Move the magnet again along the iron bar in the same direction as you did before. 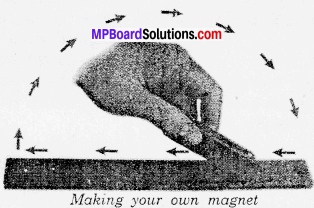 Repeat this process about 30 – 40 times. Bring a pin or some iron filings near the iron bar to check whether it has become a magnet. If not, continue the process for some more time. Remember that, the pole of the magnet and the direction of its movement should not change. In this way, an iron strip can be converted into a magnet. 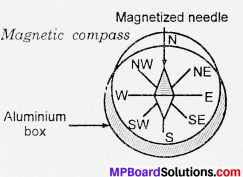 Question 10.
A magnet was brought from different directions towards a toy boat that has been floating in water in a tub. Affect observed in each case is stated in Column I. Possible reasons for the observed affects are mentioned in Column II. Match the statements given in Column I with those in the Column II 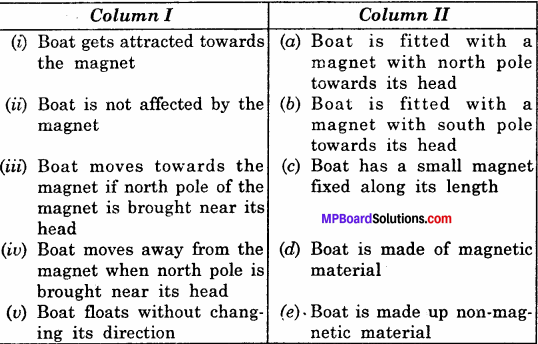 Activity 1.
collect various objects of day – to – day use from your sourroundings. Test these with the “Magnes stick”. You can also take a magnet, touch these objects with it and observe which objects stick to the magnet. Prepare a table and record your observations.
Answer:
Table: Finding the objects attracted by magnet 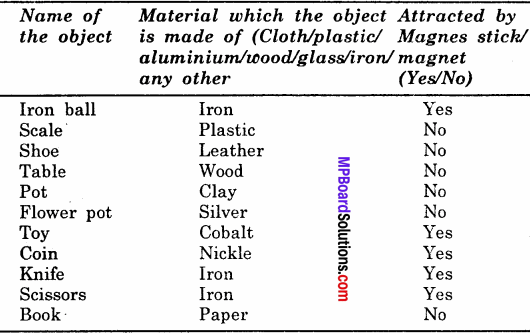 Question 1.
Boojho has this question for you. A tailor n was stitching buttons on his Shirt. The needle has slipped from his hand on to the floor. Can you help the tailor to find the needle?
Answer:
Yes, with the help of magnet.

Question 2.
Paheli has this puzzle for you. You are given tow indentical bars which look as if they might be made of iron. One of them is a magnet, while the other is a simple iron bar. How will you find out, which one is a magnet?
Answer:
The magnet has two poles where attraction is maximum. But in iron bar there is no pole, so attraction is same everywhere.

Question 3.
Which of the following statements are true (T) false (F):

Question 4.
Match the items of Column A with Column B:

Question 1.
When was magnetite discovered?
Answer:
Magnetite was discovered in 800 B. C.

Question 3.
Why was magnetite named Londestone?
Answer:
It was named so because this mineral can align itself in the same direction it left to rotate freely.

Question 6.
What is a temporary magnet?
Answer:
It is piece of magnet only for a short period. This magnetism is lost as soon as the source of magnetisation is removed.

Question 7.
How should we store magnets?
Answer:
We should store magnets by joining opposite poles of two magnets preferably with a piece of iron in between.

Question 9.
What are domains?
Answer:
When we study a magnet in microscope, it consists of small regions. These regions are called domains.

Question 11.
What is a magnetic needle?
Answer:
This needle moves a pivot fixed at the centre of a round frame box. It is used by navigators for finding out the direction in the sea.

Question 13.
What are the ends of a magnet called?
Answer:
Poles.

Question 15.
Which iron is used for making a permanent magnet?
Answer:
Hard steel and alloys.

Question 16.
What is the instrument in which directive property of a magnet is used?
Answer:
Mariner’s compass.

Question 1.
What is a magnet? How is a temporary magnet different from a permanent magnet?
Answer:
Any material that has the property of attracting iron is called a magnet.
Difference between temporary and permanent magnet:

Question 3.
Define magnetism. Also give the name of magnetic and non – magnetic substance.
Answer:
Magnetism:
Magnet has the property of attracting various substances towards itself. This property of magnet is called magnetism.

Question 4.
How can you make your personal compass?
Answer:
Magnetise an iron needle using a bar magnet. Now, insert the magnetised needle through a small piece of cork or foam. Let the cork float in water in a bowl or a tub. Make sure that the needle does not touch the water (Fig.). Your compass is now ready to work. 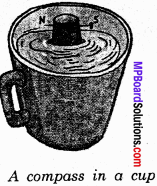 Question 5.
What is an electromagnet? Give two applications of electromagnets?
Answer:
When an electric current flows through a coil of wire, the coil behaves like a permanent magnet. When this current carrying coil is brought near a suspended bar magnet, one end of the coil repeals the north pole of the magnet. The other end of the coil attracts the north pole of the magnet. Thus, a current carrying coil has both a north and south pole like a magnet, such a magnet is called electromagnet.

Answer:
Suspend a bar magnet with a string. This bar magnet should be marked with north and south pole. 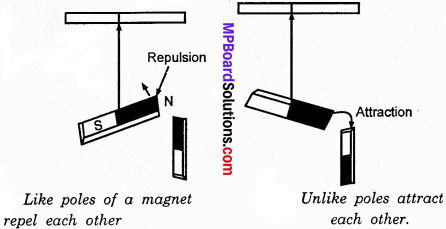 Dividing a magnet infinitely would still produce tiny magnets each having its own poles at two ends. This shows that two poles of a magnet cannot be separated and an isolated magnetic pole does not exist.

Question 3.
Explain the process by which a permanent magnet can magnetise an ordinary piece of iron?
Answer:
A piece of iron can be magnetised by two methods:

1. By single touch method. Put a piece of iron on the table:
Hold a bar magnet on it vertically with north pole touching. Now move the magnet along the length. By repeating this practice many times makes that iron piece a magnet.

2. By double touch method:
Put a piece of iron on the table. Hold two bar magnets on it vertically with north and south pole of two magnets. Put them in the middle first. Move the magnets in opposite direction as shown in figure. Repeating this process converts the piece of iron into a magnet. 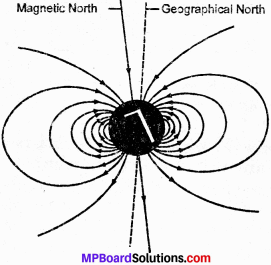 Question 5.
Write a short note on the cautions of magnets?
Answer:
Magnets loose their properties if they are heated, hammered or dropped from some height [Fig. (a)]. Also, magnets become weak if they are not stored properly. 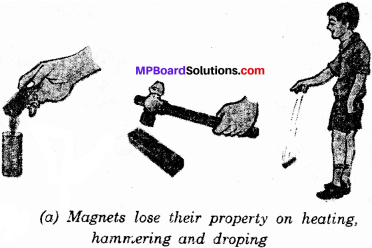 To keep them safe, bar magnets should be kept in pairs with their unlike poles on the same side. They must be separated by a piece of wood while two pieces of soft iron should be placed across their ends [Fig. (b)]. For horse-shoe magnet, one should keep a piece of iron across the poles. 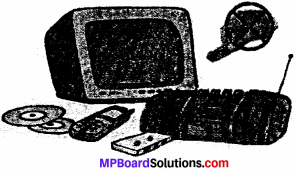