Question 3.
Why are Mn2+ compounds more stable than Fe2+ towards oxidation to their +3 oxidation state? (NCERT)
Answer:
Mn+2 has stable electronic configuration [Ar]4r03d5 and they do not easily change to Mn+3, Fe+2 [Ar] 4s03d6 on oxidation forms Fe+3 [Ar] 4s03d5 a more stable configuration.

Question 5.
What are alloys? Name an important alloy which contains some of the lanthanoid metals. Mention its uses. (NCERT)
Answer:
An alloy is a homogeneous mixture of two or more metals or metals and non – metals. An important alloy contains lanthanoid metal is mischmetal which contains 50% Cerium and 25 % Lanthanum, with small amounts of Nd (Neodymium) and Pr (Praseodymium). It is used in Mg – based alloy to produce bullets, shell and lighter flints.

Question 1.
Wnat is lanthanoid contraction? What are the consequents of lanthanoid contraction? (NCERT)
Answer:
Interesting feature of the atomic size of lanthanides is that on moving down the group steady decrease in atomic size is observed. The shape of f – orbital is in such a way that its shielding effect is minimum, there fore on addition of extra electron in f – subshell only attractive force increases. The steady decrease (contraction) in size of fourteen lanthanide elements (La3+1.06 Å to Lu3+ 0.8 Å) by a value of about 0.2Å is known as lanthanide contraction. 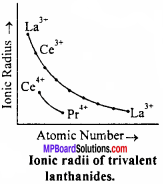 Reason:
1. The new electrons in lanthanides instead of going to outermost shell enters (n – 2)f – suborbital as a result of which force of attraction increases between electron and nucleus due to which atom or ion contracts.

Question 2.
What are Transition elements? They show metallic character. Why?
Answer:
Elements whose atoms in their ground state or ions in their common oxidation states have incomplete or partially filled d – orbitals are called transitional elements. They are in group 2 to 13. Example : Fe, Ni, Co, etc.
General formula : (n – 1)d1 – 10ns1 – 2

Metallic character of an element depends on its tendency to form cation by loosing one or more electrons from its atom. All transitional elements are metals because they contain one or two electrons in their outermost shell which can be easily lost due to low ionisation energy. Thus, they are metallic in nature.

Question 3.
Why do transition metals exhibit variable oxidation states?
Answer:
Transition metals exhibit variable valency because the energy subshell (n – 1 )d and ns are very close. Thus, possibility to lose electrons from ns subshell as well as from (n -1 )d subshell is very much if there are unpaired electrons. So oxidation states of these metals may increase. In these elements Mn shows maximum variable valencies.

Question 4.
Transition elements form alloy easily. Explain.
Answer:
It is the homogeneous mixture of two or more metals or metals with non – metals. Alloys are made to confer the property of metals. Transition elements have great tendency to form alloys because these elements have similar atomic size and can mutually substitute their positions in their crystal lattice. Alloys are comparatively hard and have higher m.p. than the elements from which they are made.

Question 5.
The radius of Fe2+ ion is smaller than the radius of Mn2+ion, why?
Answer:
The atomic number of Fe (26) is more than the atomic number of Mn (25). Due to higher value of atomic number, iron nucleus contains more protons. Hence the force of attraction between the nucleus and the electrons of outermost orbit is more. Due to strong attractive force of the nucleus the electron cloud is pulled inwards which results in smaller size of Fe2+ ion as compared to Mn2+ ion.

Answer:
1. Cause of formation of complex compounds by Transition metals :

3. Titanium is a shining white metal. It is extended strong (harder than steel), has high m.p. Good conductor of electric current resistant to corrosion and light metal. Due to all these qualities, it is called wonder metal.

TiO2 is white whereas TiCl3 is violet, why?
In first transitional series paramagnetism increases till Cr then it starts de – creasing. Why?

2. Transition elements have high effective nuclear charge and a large number of valence electrons. Therefore, they form very strong metallic bonds. As a result, the enthalpy of atomization of transition metals is high.

3. The colour of transitional metal ions is due to partially filled (n – 1 )d orbitals. In transitional metal ions which contain unpaired d electrons, transition of electrons takes place from one d – orbital to another d – orbital. During this transition it absorbs some radiation of visible light and reflects the remaining radiation in the form of coloured light. Thus, the colour of the ion is complementary to the colour absorbed by it.
For example:
[Cu(H2O)6]2+ ion appears blue because it absorbs the red colour of the visible light for electron promotion and reflects its complementary blue colour.
Colour of some ions:

Question 12.
How would you account for the following : (NCERT)

3. The ions with dl configuration try to lose the only electron on d – subshell in order to acquire stable inert gas configuration.

Question 13.
Compare the chemistry of actinoids with that of the lanthanoids with special reference to: (NCERT)

Question 14.
What are Inner Transition elements? (NCERT)
Answer:
These are the elements which contain (n-2)f and (n-1)d incomplete orbitals or in which electron enter in the antipenultimate (two energy levels below the outermost orbital) orbital. These are so called because these are found within the transition elements. There are two types of inner transition elements :
(i) Lanthanides series :
The 14 elements after Lanthanum (La57)
i.e., 58Ce – 71Lu are called lanthanides.

Question 1.
Describe the preparation of K2Cr2O7 from chromite ore and explain the reactions of K2Cr2O7 with acidic FeSO4, KI and H2S.
Answer:
(A) Preparation:
It is prepared from chromite ore or ferrochrome of chrome iron FeCr2O4 (FeO.Cr2O3). Different steps involved in the process are as follows :

1. Preparation of sodium chromate:
The ore is finely powdered, mixed with sodium carbonate and quick lime and then roasted (heated to redness) in a reverberatory furnace in presence of excess of air when sodium chromate (yellow in colour) is formed with the evolution of CO2. Quick lime is added to keep the mass porous and thus facilitates oxidation.

The roasted mass is the extracted with water when sodium chromate dissolves com-pletely leaving behind ferric oxide.

(B) Reaction of K2Cr2O7 with acidic FeSO4, KI and H2S :
(i) It oxidizes ferrous sulphate to ferric sulphate.

These reactions are used in the estimation of iodine and ferrous ion in volumetric an-alysis.
(iii) It oxidizes SO2 to sulphuric acid.

(iv) It oxidizes H2S to sulphur.

In neutral medium:
In this medium, the reaction begins with neutral ethylene glycol but this does not give neutral reaction because KOH formed in the reaction makes basic in nature.
2KMnO4 + H2O → 2KOH + 2MnO2 + 3[O]
Example:
1. It oxidizes manganous sulphate to manganese dioxide.
2KMnO4 + 3MnSO4 + 2H2O → 5MnO2 + K2SO4 + 2H2SO4

2. It oxidizes iodide to iodate.

Question 3.
Describe the preparation of KMnO4 from pyrolusite and explain its oxidising properties in acidic, basic and neutral medium by suitable example. (MP 2009 Set B, 17)
Answer:
Preparation:
Potassium permanganate is prepared from manganese dioxide. On a large scale, it is prepared from the mineral pyrolusite. The process involves the following steps:

After the oxidation is completed, the solution is filtered and evaporated under controlled condition to obtain the crystals of potassium permanganate.
(i) Acidified KMnO4 solution oxidizes Fe(II) ions to Fe(III) ions i.e. ferrous ions to ferric ions.