Question 1.
Persons dealing with chemistry in Egypt were called:
(a) Scientist
(b) Alchemist
(c) Chemist
(d) Philosphers
Answer:
(b) Alchemist

Question 3.
Answer in one word/sentence:

Question 4.
Match the following:
(I)

Question 7.
Fractional crystallization method used to separate two substance depend on the difference between their:
Answer:
Solubility.

Some Basic Concepts of Chemistry Short Answer Type Questions – I

Question 1.
What is the law of constant proportion?
Answer:
The law states that, “A chemical compound is always found to be made up of the same elements combined together in the same proportion by weight.” Example: Water from different sources is collected and decomposed. After decomposition in each sample of water, it is found that the weight of hydrogen and oxygen is according to the ratio 2:16 or 1:8.

Question 4.
What is mole?
Answer:
The number of elementary particles present in 12 grams of C – 12 is called mole. It is equal to 6.023 × 1023 particles. This is known as Avogadro number. 6.023 × 1023 atoms, molecules or ions are called one mole atom, one mole molecule or one mole ions respectively.

Question 5.
Define limiting reagent? (NCERT)
Answer:
The reactant which is completely consumed when a reaction goes to completion is called limiting reagent or limiting reactants because its concentration limits the amount of products formed.

Question 6.
What do you mean by significant figures? (NCERT)
Answer:
The significant figures in a number are all the certain digits plus one doubtful digit. It depends upon the precision of the scale or instrument used for the measurement.
Example: In 3.03, three digits are significant.

Question 7.
How many significant figures are present in the following: (NCERT)

Question 8.
What is rounding off rule? (NCERT)
Answer:

Question 9.
Round off the following up to three significant figures: (NCERT)

Question 10.
What is the SI unit of mass, length, time, temperature and amount of substance?
Answer:

Question 11.
Determine the empirical formula an oxide which has 69.9% iron and 30.1 % hydrogen by mass?
Answer:

Question 16.
What is the law of constant proportion?
Answer:
The law states that, “A chemical compound is always found to be made up of the same elements combined together in the same proportion by weight.” Example: Water from different sources is collected and decomposed. After decomposition in each sample of water, it is found that the weight of hydrogen and oxygen is according to the ratio 2:16 or 1:8.

First isotope of lead combines with oxygen in the ratio 206:16 while the second reacts in the ratio 208:16. But compounds formed in nature are generally mixture of isotopes and the atomic mass of the element is the average of the atomic masses of various isotopes. Thus, composition of chemical compound remains fixed. Therefore, validity of this law is doubtful.

Question 17.
Calculate the amount of carbon dioxide that could be produced when: (NCERT)

Answer:
The balanced equation for the combustion of carbon in dioxygen/air is –

Question 1.
Explain the Gay Lussac’s law of gas volume?
Or, One volume of nitrogen combine with 3 volume of hydrogen to give 2 volume of ammonia. Which law supported by this ratio ? Write statement of this law?
Answer:
Gay Lussac’s Law of Combining Volumes:
When gases react together, they do so in volumes which bear simple ratio to one another and to the volumes of the gaseous products provided all measurements were made under similar condition of temperature and pressure.
For example:

Question 2.
Define molality of a solution and also write its formula?
Answer:
Molality of solution may be defined as the number of moles of the solute dis¬solved per 1000 gm of the solvent. It is represented by m.
Molality = 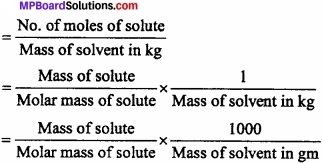 Thus 12 grams of carbon combine with 32 gram oxygen to form 44 gram oxygen. In the light of modern investigations, law of conservation of matter: From modem investigations, it is proved that matter can be changed to energy. In some reactions, some energy is produced which causes loss in mass.
According to Einstein’s famous equation of energy – mass relation,
E = mc2

Where, E = Energy (in erg), m = Mass of the substance (in gm), c = Velocity of light (in cm/sec).
In reactions, which we perform in laboratories, very less quantity of energy is absorbed or produced, so the change in mass is very less and is negligible. Such types of changes can be seen clearly in nuclear reaction (atomic bomb). For ordinary reactions, the law is quite valid.

Question 5.
Calculate the amount of carbon dioxide that could be produced when:

Answer:
The balanced equation for the combustion of carbon in dioxygen/air is:

1. In air, combustion is complete. Therefore, CO2 produced from the combustion of 1 mole of carbon = 44 g.

3. Here again, dioxygen is the limiting reactant. 16 g of dioxygen can combine only with 0.5 mole of carbon. CO2 produced again is equal to 22 g.

Example: The molecular mass of a compound with empirical formula CH2O is 180.
∴

Question 8.
Differentiate between molarity and molality?
Answer:
Differences between Molarity and Molality:

Question 9.
What is law of reciprocal proportion? Explain?
Answer:
Law of reciprocal proportion or Law of equivalent proportion: This law was put forward by Richter in 1792. It states that: When two different elements unite with the same quantity of a third element the proportions in which they do so will be the same as, or some simple multiple of the proportions in which they unite with each other. Or, Weights of two elements (say A and B) which separately combine with a fixed weight of a third element (C) are either the same or simple multiples of the weights (of A and B) in which they combine with each other.

This law can be explained with the help of the following examples:
Consider three elements carbon, oxygen and hydrogen. Element carbon and oxygen combines with a definite mass of hydrogen in the ratio given below:
In methane (CH4), H:C = 4:12
and in water (H2O), H:O = 2:16 or 4:32
According to this law if carbon and oxygen combines with each other then their ratio should be 12:32 or some simple multiple of it. We know that in carbon dioxide, CO2, ratio of C:O = 12:32 which is according to this law. Hence, it illustrates law of reciprocal proportion.