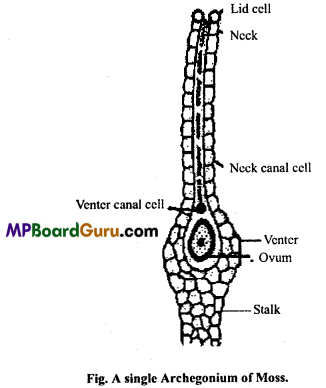 Question 2.
What do you understand by protonema?
Answer:
Juvenile forms (Protonema) :
It is a green branched filamentous structure. From green aerial filaments produced some branches which grows below substratum and are without chloroplasts are known as rhizoidal branches. They penetrate the soil and help in absorption of water and minerals. Several buds develops on protonema and each bud develops into leafy gametophore.

Question 3.
What do you understand by Mycorrhiza?
Answer:
It is a type of symbiotic association which is found in Pinus plant in between roots and fungi in which on outer side of root safety shell is present. Fungus absorbs water, mineral and protein for plants and in return from plants, it gets nutrition.

Question 4.
What do you understand by Apospory?
Answer:
Sometime the cells of sparophytes get separated from mother plant and fall on soil, where they germinate and form protonema. Sometime on top of protonema a leafy gametophore is formed from which a new plant is formed in which all the cells have double characters. Thus the protonema formed from the cell of sporophyte without division gametophyte develops. This is known as Apospory.

Question 5.
What do you understand by sulphur shower?
Answer:
At maturity, the microsporophylls separate and spread apart. The sporangia dehisce by longitudinal slit and shed large quantities of pollen grains. Since pollen grains flow in colour and are discharged in such a large number that their shedding is referred to as sulphur shower.

Question 8.
Why Spirogyra is called as Pond silk?
Answer:
Pectin layer present outer to the cellulose cell wall of Spirogyra dissolves in water to form a mucilaginous sheath. Thus Spirogyra became slippery, after drying looks like a silk thread, that is why it is called as pond silk.

Question 12.
What is thallus?
Answer:
Plant which cannot be differentiated into root, stem and leaves are called as thallus.

Question 15.
Give two fern like characteristics of Cycas plant of gymnosperm.
Answer:

Question 17.
Give three examples of gymnosperms found in India.
Answer:

Question 2.
Give ploidy of following : 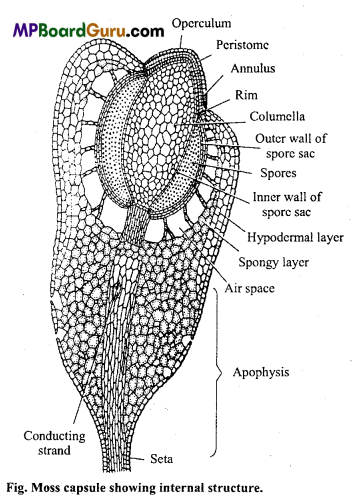 Question 5.
What is Heterospory? Write a note on it and give two examples.
Answer:
Heterospory : Formation of two different types of spores, such as small microspores and large megaspores is called as Heterospory.
First of all heterospory was observed in Selaginella. It is also observed in Salvinia.
Megaspore (female) and microspore (male) develop to produce female and male gametophytes respectively.
Female gametophyte remains attached to sporophytic plant to fulfil its requirement.

(B) Economic importance of Brown algae :

Life Cycle of Bryophyta (Funaria):
In the life history of mosses two generations viz, gametophyte and sporophyte are found which regularly alternate with each other. The dominant phase is represented by the gametophyte which is haploid (n) and it reproduces sexually by the fusion of gametes (antherozoids and ovum) give rise to the sporophyte which is diploid structure (2n). Meiotic division takes place in the capsule of sporophyte during sporogenesis to form spores. These spores germinate to producer new gametophyte. 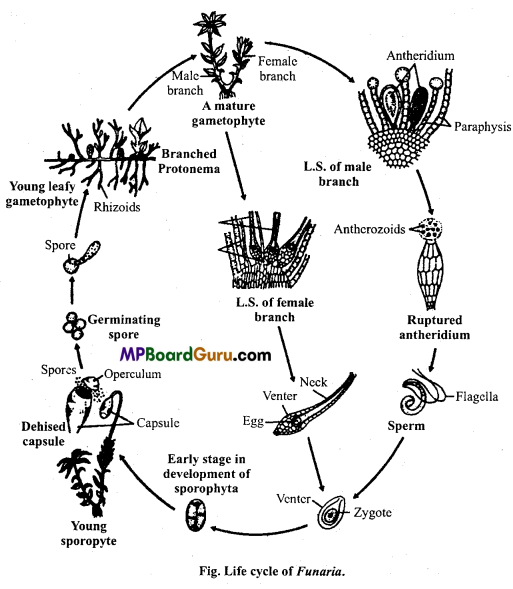 (iii) Archegonium :
Female reproductive organ of Bryophyta and Pterydophyta are called as Archegonium. It is multicellular flask shaped structured, which produces haploid
egg.

(v) Sporophyll:
In Pterydophytes leaves on which sporangium are formed called as Sporophyll. e.g., Fern.

(vi) Isogamy :
Similar gametes which fuses together to form zygote are called as Isogamy. e.g., Chlamydomonas.

Question 1.
Dominant stage of bryophytes is :
(a) Haploid
(b) Diploid
(c) Both are similar
(d) None of these.
Answer:
(a) Haploid

Question 12.
Ferns are highly developed than mosses because of the :
(a) Presence of vascular tissue
(b) Dominance of sporophyte
(c) Root, stem and leaves are well developed
(d) All of these.
Answer:
(d) All of these.

Question 25.
Ribbon like chloroplast is found in :
(a) Ulothrix
(b) Spirogyra
(c) Oedogonium
(d) Marc hantia.
Answer:
(a) Ulothrix

Question 32.
Meiotic division takes place in the zygote of :
(a) Selaginella
(b) Spirogyra
(c) Pinus
(d) Equisetum.
Answer:
(b) Spirogyra

Question 33.
In which meiosis does not occur :
(a) Green algae
(b) Fungi
(c) Bacteria
(d) Higher plants.
Answer:
(c) Bacteria

15. In two kingdom classification algae and fungi are kept in …………….. group.
Answer:
Thallophyta

1. Bryophytes are found in marshy place not in water.
Answer:
False

5. Inside the seed of Pinus gerardiana, almond is present.
Answer:
False

2. Ligule is present in the leaves of?
Answer:
Selaginella

3. Peristome is found in the capsule of?
Answer:
Pellia

5. The development of seed habit is started with?
Answer:
Heterospory