In this article, we will share MP Board Class 10th Social Science Book Solutions Chapter 3 Industries in India Pdf, These solutions are solved subject experts from the latest edition books.

Question (b)
The capital of cotton textile industry of India is:
(a) Ahmedabad
(b) Mumbai
(c) Allahabad
(d) Indore.
Answer:
(b) Mumbai

Question (c)
Where is the security paper mill located in India?
(a) Nepanagar
(b) Titagarh
(c) Saharanpur
(d) Hoshangabad.
Answer:
(b) Titagarh

Question 1.
What is an industry?
Or
What do you mean by manufacturing industry? (MP Board 2009)
Answer:
The work of making or manufacturing things is called industry. In the process of manufacturing or making things man uses raw material and converts it into finished goods with the help of labour, energy and technology.

(b) Mineral based:
Where raw materials is mineral e.g. Iron and Steel industry.

Question 4.
Where are paper units set up in West Bengal? (MP Board, 2011)
Answer:
The raw materials from agricultural products, forest and the pulp of bamboo and grass are abudantly available in the riverine zone of West Bengal and the marshland of Sunderban. There are the following area:

Titagarh, Ranigarh, Naihati, Kolkata, Kakinada, Bada Nagar, Shivraphooti etc. Where the 40% of country’s share is contained. On the other hand suitable climatic condition centrally setup labour availability and good networking are the boon for the of paper industry in West Bengal.

Question 5.
State the need of establishing cottage and small scale industry in local level?
Answer:
Small scale and cottage industries are the backbone of an economy. Some industries are based on agricultural and forest produces. These industries obtain the supply of raw material in the form of agricultural crops and forest products. In forest and village areas where the vanvasis and villagers twelve, there is an acute lack of industries. Therefore there is an urgent need to establish small and cottage industries.

1. According to the Criterion of Ownership:
Industries can be classified into four types:

(a) Private industries:
which are owned by an individual,

(b) Government industries:
which are owned by Government,

(d) Mixed industries:
which are owned by two or more owners of the above types.

3. On the Basis of Size:
industries can be classified into four types:

(b) Medium industries:
Where capital investment is between 5 and 10 crores e.g. Leather industry.

(c) Small scale industries:
Such industries in which capital investment is 2 to 5 crores e.g. lac industry.

4. On the Basis of the Type of Finished Goods:
Industries can be classified into two types:

(b) Light industries: where small articles of daily use are manufactured e.g. toys.

5. On the Basis of Raw Material:
Industrial units can be divided into three types:

(b) Mineral based industries:
such units which use mineral as raw material e.g., Iron – Steel industry.

Question 2.
In which four areas the Iron and Steel Industry is located and why? State the area wise names of the plants?
Answer:
The first modern iron and steel plant was set up in a place ‘Portonovo’ in the State of Tamilnadu (India) in the year 1830. The first major plant of iron and steel was set up in ’Sakchi1, a place in Jharkhand State, in the year 1907 by Jamshedji Tata. This place is now known as Jamshedpur.

The Iron and Steel industry located in Jamshedpur is known as ‘Tata Iron and Steel Company.’ (TISCO). The main reason of localisation of this industry in these areas is that the raw materials used in this industry are heavy, cheap and full of impurities due to which it is uneconomical to transport heavy raw materials, therefore the production units themselve are set up there. The industry is mainly localised in four regions:

Production of iron and steel:
The systematic development of Iron and Steel Industry of India after independence has resulted into sustained increase in die production in last few decades during 1970 – 1971 the production was 70 lakh tones which increased to 492 lakh tones in the year 2005 – 2006. The industry is giving direct employment to more than 5 lakh persons in India.

The main paper producing states in the country are Karnataka, Bihar, Jharkhand, Kerala, etc. In Hoshangabad of Madhya Pradesh the security paper mill is also there. There are more than 600 paper and straw based mills in the country which give direct employment to approximately 3 lakh people. In our country the demand for paper is more than the production therefore, this industry needs concentrated efforts to speed up the development further.

Through Five Year Plans Targets for industrial development were set. Consequently, due to increasing contribution of industries in national development, achievement of following objectives could become possible.

There are other factors also responsible for atmosphere pollution but here we shall study this problem with regard to industrialisation.

Air pollution:
The poisonous gases and smoke emitted by the industrial plants are main cause of air pollution, The nature and quantum of industrial pollution depends on the type of industry, raw material used and manufacturing technique and process. From this point of view textile industry, chemical industries, metal industry, oil refineries and sugar industry cause more pollution as compared to some other industries.

Water pollution:
Water is necessary for life. Undesirable elements when get mixed up with water, they pollute the water. Water is used for production by industries. During the manufacturing processes harmful matter, salts, acids and chemicals etc. get mixed ,up with the water; this water then flows into rivers and water reservoirs.

Sound or Noise pollution:
Any sound in the air which is irritating and hampers the functioning of mind properly i.e., noise, is the main form of sound pollution. A variety of machines are used in industries which produce constant noise. Generators also make constant noise. Consequently the workers working here become victims of deafness and many mental problems.

Question 7.
Chief Forest Produce and Small scale and Cottage Industries of Madhya Pradesh?
Answer:
In Madhya Pradesh different types of valuable forest produce are through which the state government earns huge income every year. The government has introduced several schemes to collect and make use of forest products. It is essential for the development of vanvasis, that a part of forest products is used in small scale and cottage industries which are established locally. In this way the economic and social progress of the local inhabitants can be achieved.

Question (a)
Which of the following raw material is related to the paper industry?
(a) Regur
(b) Pulp
(c) Soya
(d) Wood
Answer:
(b) Pulp

Question (b)
Coimbatore of Tamilnadu is the famous centre of:
(a) Paper
(b) Cotton
(c) Carbon
(d) Cardemom.
Answer:
(b) Cotton

Question (e)
The first large scale plant of iron and steel was set up?
(a) Sakchi
(b) Jamshedpur
(c) Tamilnadu
(d) Delhi
Answer:
(a) Sakchi

Answer in One – Two Words or One Sentence

Question 1.
When was the first cotton textile mill started in India?
Answer:
It started in Bombay in 1854.

Question 2.
When and where did the first jute mill start in India?
Answer:
At Calcutta in 1939.

Question 3.
Name the state where coir industry is most developed in India?
Answer:
In Kerala.

Question 5.
Divide the industries on the basis of division of labour?
Answer:

Question 6.
Classify industries on the basis of raw materials and finished products?
Answer:

Question 7.
Name industries which are owned by the State Government or some agency of the Central Government?
Answer:
Public Sector Enterprises.

Question 9.
Name the industry which serves as basis to many industries?
Answer:
Basic Industry.

Question 11.
On the basis of ownership, in which sector can the Bhilai Steel Plant be put?
Answer:
Public Sector.

Question 12.
Give an example of the consumer industry?
Answer:
Fast Food Industry.

Question 13.
When and where was the Modem Cotton Textile Industry set up in India?
Answer:
Near Kolkata in 1818.

Question 14.
In which two states in India has the Cotton Textile Industry developed the most?
Answer:

Question 16.
How many jute factories are there at present in India?
Answer:
106 factories.

Question 21.
What is the place of India in the production of sugar in the world?
Answer:
First.

Question 22.
Where are most of the sugar industries located in India?
Answer:
Uttar Pradesh.

Question 23.
Name the sector in which the maximum number of sugar mills are situated in India?
Answer:
Co – operative Sector.

Question 24.
When and where was the first Modem Iron and Steel Industry set up in India?
Answer:
At Jamshedpur in 1907.

Question 26.
Which place is well known for the manufacture of railway coaches in India?
Answer:
Perambur (Chennai) and Kapurthala (Punjab).

Question 3.
What are the constituents of agro-based industries?
Answer:
Textile, sugar, vegetable oil and plantation industries derive their raw material from agriculture.

Question 6.
On the basis of ownership, classify the modem industry?
Answer:

Question 7.
Name the four Iron and Steel Plants of India which have come up with foreign collaborations?
Answer:

Question 12.
In which category of products would you put the following:
Grass, meat, coffee, iron ore.
Answer:

Question 1.
Describe the industries on the basis of nature of industry?
Answer:
Village industry:
Industries that are run within the village with their traditional methods of production are called village industries.

The main silk producing centres are:

Rails and sleeper bars are manufactured at iron and steel plants. Railway coaches are manufactured at Perambur in Tamil Nadu, Bangolore in Karnataka, Kapurthala in Punjab and Kolkata in West Bengal. Railway wagons are made in private sector and at railway workshops like Delhi, Varanasi, etc.

2. Medium scale industries:
These industries also employ large number of employees and use power machines in the production process but the amount of money spent is less than the large scale industries and the labour power used is also comparatively less.

3. Small scale industries:
Industries which employ less number of people and need less capital for starting the industry. They also use power but the amount of power used is much less than the other industries.

India is mainly an agriculture economy. The growth of its economy therefore depends upon the growth of agricultural production. Agro – based industries supply us food, cloth, packing material like jute, tea, and other articles of daily need. These industries have enhanced em-ployment opportunities to the teeming millions in villages.

Question 3.
Describe the five important ingredients of modem industry by giving suitable examples from India?
Answer:
Raw material, skilled, efficient and trained labour, capital availability of Power resources and transport facilities are the most important ingredients of modem industry. In fact, they are the factors on which localisation of industries depend. A factory tends to establish itself at places where these facilities are found:

1. Raw material:
It is the basic ingredient of a modern industry because it is the only important component that provides raw material which is transformed into the finished product.

2. Skilled, efficient and trained labour:
Another important in gredient is availability of efficient and qualified labour. Highly skilled and trained workforce is needed today as the production techniques have completely changed.

3. Capital:
It is also one of the most important factor of pro¬duction on which the modern industry depends.

4. Power:
The present industrial age is the machine age. All giant size machines have been installed by the industrial units. It is power only which runs them. Without the availability of power resources these machines are useless.

5. Market:
It is yet another important ingredient of modern industry. It means that there should be sufficient demand for goods being manufactured and their actual purchases.

6. Transport facilities:
These facilities are called the life lines of a country. Without them man and material cannot be sent from one place to another place. Hence the modern industry entirely depends on fast means of transport and communication for sending goods and messages. 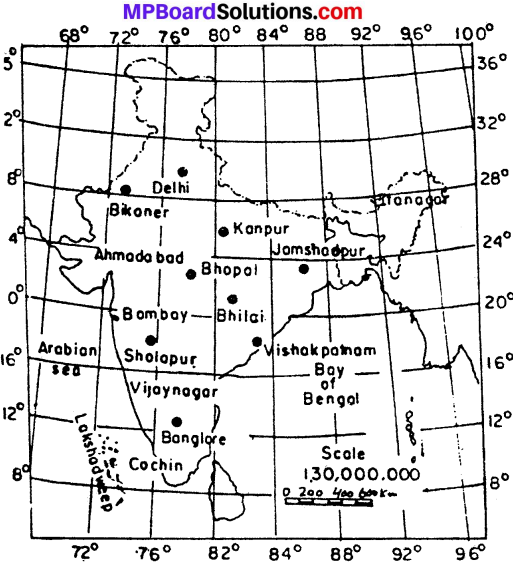 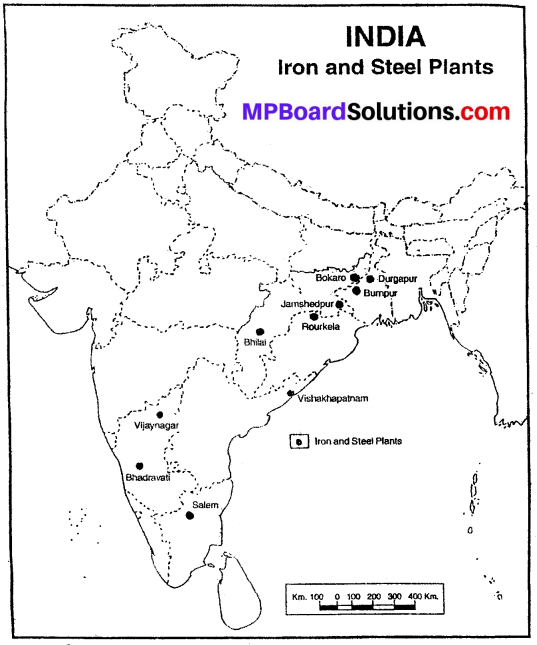 Question 3.
On an outline map of India show the agriculture – based industry?
Answer: 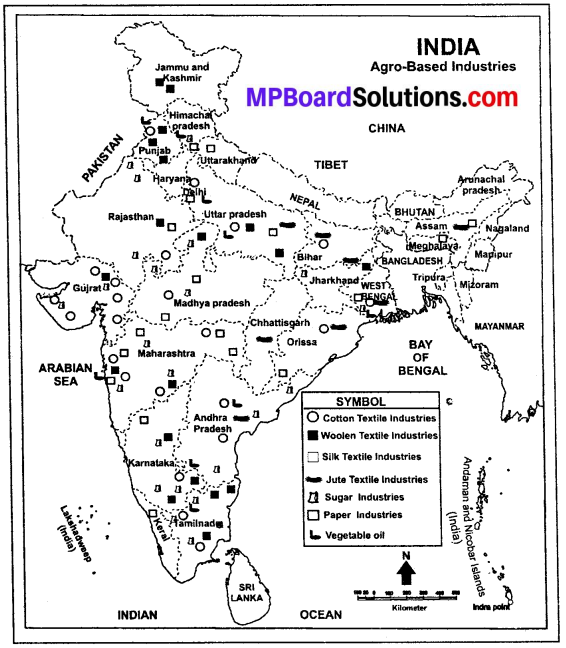