Students get through the MP Board Class 11th Biology Important Questions Chapter 16 Digestion and Absorption which are most likely to be asked in the exam.

Question 4.
Write the name of disease caused by deficiency of protein and iodine.
Answer:

Question 5.
Write down the difference between chyme and chyle of man’s digestive system.
Answer:

Question 7.
What is anaemic stage? How it is cured?
Answer:
Anaemia is a stage in which the amount of haemoglobin in blood is decreased. The chief cause of this condition is the deficiency of iron. It is also caused due to deficiency of vitamin B6 and B12. It can be cured by taking iron elements, vitamin B6 and vitamin B12.

Question 9.
Write the name of any four enzymes present in pancreatic juice.
Answer:

Question 11.
Microvilli are found in intestine but are absent in stomach, why?
Answer:
Microvilli present in intestine perform the absorption of food materials. These villi increase the absorbing surface of intestine. Absorption is not accompanied in stomach hence villi are not found within it.

Question 13.
What is lacteales? Where it is found?
Answer:
Lacteales is a short lymph duct found in villi of intestine. It absorbs the fatty acid and glycerol in small intestine. Because of fat particle the colour of lymph is white.

Question 14.
How ingested fat is absorbed in the body?
Answer:
First of all bile juice form the emulsion of fat then lipase enzyme hydrolyses emulsified fat into fatty acids and glycerol. Then it is absorbed by the microvillies of small intestine and passes into lacteal tubules and then through lymphatic system distributed to all parts of the body.

Question 15.
What is rickets? Name the vitamin, the deficiency of which is responsible for it.
Answer:
Rickets disease occurs in the children. Bones become weak and bent. This disease is caused due to the deficiency of vitamin D.

Question 16.
How milk is digested in the stomach?
Answer:
The gastric gland of the stomach secretes gastric juice which contains dil HCl and two inactive enzymes pepsinogen and prorenin. Inactive prorenin converts into active renin in the presence of dilute, hydrochloric acid. Renin hydrolyse milk protein (casein) into calcium paracaseinate.

2. Thecodont: Teeth are embedded into the socket of jawbones.
3. Heterodont: Teeth are of various sizes, shapes and structures. In man these are of 4 types: Incisors, canines, premolars and molars.

2. In the Duodenum: Pancreas secretes pancreatic juice, which reaches to the duodenum, through pancreatic duct. Pancreatic juice contains Amylase enzyme, which hydrolyses starch into maltose.

1. Buccal cavity: Digestion of protein does not occur in this part.
2. Stomach: In the stomach, gastric juice is found which contains HCl, pepsinogen and prorenin enzymes. These enzymes convert into their active form by the help of HCl.

4. Intestine: In the intestine, intestinal juice is found which contains erepsin enzyme which converts di, tri and polypeptides into amino acids.

(B) Absorption of fat: After completion of digestion process in the intestine, still some fats remain undigested and remain in the form of mono and diglycerides. These undi¬gested fats combine with bile salt to form small globules called as micelles. These are absorbed by the cells of microvilli by diffusion, where they forms large globules by forming phospholipids.

Now, these large globules are called as chylomicron. Chylomicron reaches to the lymph capillaries present in the microvilli become milky in colour due to presence of large globules. Milky lymph is called as chyle and now these fine lymph capillaries are called as Lacteals, which opens into lymph vessels. These lymph vessels carries digested fat to the thoracic lymph duct from where it reaches to the hepatic portal system.

1. Inactive enzyme trypsinogen is converted into active trypsin by the intestinal enzyme enterokinase.

3. Trypsin and Chymotrypsin both help to hydrolyse peptone into peptides.

Question 3.
How does digestion of protein occurs in the stomach ?
Or
Explain the process of digestion in the stomach. (NCERT)
Answer:
Digestion in stomach: Stomach is the widest part of the alimentary canal where food is kept for 1- 5 hours. Stomach contains a number of microscopic gastric glands. Secretion of gastric gland is called gastric juice. It contains proenzyme pepsinogen, HCl, mucus, a weak enzyme gastric lipase and intrinsic factor. In calf a weak enzyme rennin is also present.

Mucus protects the stomach wall against HCl and proteolytic enzyme pepsin. It also lubricates the food. HCl converts proenzyme pepsinogen into proteolytic enzyme pepsin. Pepsin is also autocatalytic. Other functions of HCl includes providing acidic pH for working of pepsin, stoppage of ptyalin action and prevention of bacterial growth. The enzymes of gastric juice helps in the digestion as follows :
1. Digestion by pepsin: It is secreted in the form of inactive pepsinogen and is activated by HCl to digest protein molecules.

2. Digestion by mucin: It is forming a protective sheath on mucous membrane after decreasing the acidic effect of gastric juice. Water and mucin of saliva moisten the food and make the mucous membrane slippery. Thus it helps in the process of digestion.

3. Digestion by rennin : It is secreted in the form of prorennin and is activated by HCl. It converts milk into curd and takes part in the process of digestion as follows :

4. Digestion by gastric lipase: It is responsible for hydrolysis of fats into fatty acids and glycerols.
At the end of its stay in stomach, the food is converted into a pulpy mass called chyme. The pyloric valve opens at intervals and chyme passes into duodenum part of small intestine.

Question 4.
Describe about the gland which contains the islets of Langerhans.
Answer:
The islets of Langerhans are found in pancreas. It is a pink coloured small gland situated in the ‘U’ shaped portion of duodenum. It is covered by a membrane which is filled with a connective tissue. It contains a number of the lobules held together by connective tissue.

A lobule has several alveoli or acini. An alveolus possess a narrow cavity and a layer of glandular cells. The latter secrete pancreatic juice. The narrow cavity forms a ductule. The ductules form ducts, which join to produce a single pancreatic duct. The latter opens into duodenum either independently or along with common bile duct. 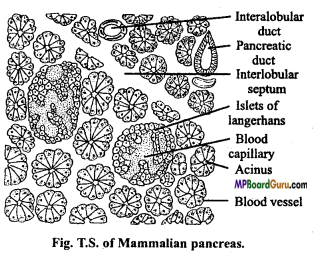 Chymotrypsin is produced in inactive form as chymotrypsin in the pancreatic juice which is secreted by Pancreas. It reaches to the duodenum through pancreatic duct.
Two other enzyme belongs to some category, i.e. proteolytic enzymes secreted by pancreas are :

Question 6.
What will happen if hydrochloric acid is not secreted in the stomach? (NCERT)
Answer:
Functions of HCl in the stomach are as follow :

Question 7.
Answer in brief: (NCERT)
(a) Villi are found in the intestine but not in the stomach, why?
(b) How does pepsinogen converts into active form?
(c) What are the basic layers of wall of the alimentary canal?
(d) How does bile help to digest fat?
Answer:
(a)Microvilli present in intestine perform the absorption of food materials. These villi increase the absorbing surface of intestine. Absorption is not accompanied in stomach hence villi are not found within it.

(b) Gastric juice secreted by gastric gland of the stomach contains dil HCl, Which converts inactive pepsinogen into active pepsin.

(c) Basic layers of the wall of the alimentary canal are – Serosa, Muscular layer, Submucosa and Mucosa.
(d) Bile juice secreted by the liver reaches to the duodenum through bile duct. It do not contain any enzyme but help for digestion in following ways :

Question 13.
The hardest substance of vertebrátes body is:
(a) Keratin
(b) Enamel
(c) Dentine
(d) Chondrin.
Answer:
(a) Keratin

Question 18.
The food present in stomach consisting of acidic medium is called :
(a) Chegle
(b) Chyme
(c) Bolus
(d) All of these.
Answer:
(b) Chyme

Question 26.
All digestive enzymes are:
(a) Lipases
(b) Hydrolase
(c) Transferase
(d) Oxidases.
Answer:
(b) Hydrolase

Question 27.
In the caecum of rabbit digestion of which substance occurs
(a) Fat
(b) Starch
(c) Cellulose
(d) Protein.
Answer:
(c) Cellulose

Question 28.
Disease caused due to deficiency of vitamin-D is:
(a) Rickets
(b) Scurvy
(c) Night blindness
(d) Pellagra.
Answer:
(a) Rickets

4. The secretion of HCl and gastric juice is controlled by …………………………. hormone.
Answer:
Enterogestron,

5. Herbivorous animal can digest cellulose because their …………………………. is well-developed.
Answer:
Caecum,

1. Write the name of bile pigments.
Answer:
Bilirubin and Biliverdin,

3. Write the name of disease caused due to deficiency of vitamin B.
Answer:
Beriberi,

4. Write the name of any four water-soluble vitamins.
Answer:
Vitamin B1, B2, B6 and Vitamin C,

6. Write the name of any two diseases of children caused due to the deficiency of protein.
Answer:
Kwashiorkor, Marasmus,

7. Write the name of organ functioning as endocrine as well as exocrine gland.
Answer:
Pancreas,

9. Name the vitamin responsible for night blindness.
Answer:
Vitamin A,

11. Name the disease caused due to deficiency of Vitamin-C.
Answer:
Scurvy,

12.Name the disease caused due to deficiency of Vitamin-D.
Answer:
Rickets,

13.Name the disease caused due to deficiency of iodine.
Answer:
Goitre,

15. Which component of food is digested by bile juice?
Answer:
Lipid and fat,

16. Which enzyme is secreted by salivary gland?
Answer:
Ptyalin,

17. Where gastric juice is secreted?
Answer:
By gastric gland of stomach,

18. Which type of stomach is found in ruminate animal?
Answer:
Ruminant stomach,

19. Pepsin is secreted in which medium?
Answer:
Acid medium,

20. Insulin is secreted by which part?
Answer:
islets of Langerhans of pancre.